Paris’s Musée des Arts décoratifs is celebrating the 70th anniversary of fashion house Dior with an exceptional retrospective. Over 300 dresses, countless documents, as well as paintings and other works that explore Christian Dior’s passion for the arts, come together to paint a multi-layered portrait of the man and his legacy. Numéro met the two curators of the show, fashion historian Florence Müller, and Olivier Gabet, director of the Musée des Arts décoratifs.

NUMÉRO: What’s the overall aim of this exhibition?

Olivier Gabet: In the same way that great painters get a show every 30 years or so, it seemed to me that a couturier as influential as Christian Dior should be celebrated just as regularly through a retrospective in a Parisian institution. The last one was in 1987, and also marked an anniversary for the fashion house. This time, it seemed natural to Florence and me to organize an exhaustive retrospective, because fashion is moving faster than ever, and young generations don’t necessarily know about the history of Dior. Aficionados might discover things they didn’t know too, because the exhibition covers a ver y long timeframe: the ten years of Christian Dior’s directorship, as well as the 60 years that followed.

Florence Müller: The last retrospective, which was also held at the Musée des Arts décoratifs, only covered the first ten years. This isn’t the first exhibition to showcase the artistic directors who followed in Dior’s footsteps, but it’s the first time that space has been given to each and every one of them. The originality of this show is that it’s organized both thematically and chronologically. We wanted to show how this fashion house has been embodied over the decades, and how it reacted to the Zeitgeist in different ways, particularly through the choice of artistic directors who were very emblematic of each period in time.

How did you put into perspective the brand’s contribution to the history of fashion?

O.G.: We wanted it to be a popular exhibition in the positive sense of the term, so that as many visitors as possible would understand why a brand like Dior is so important. While the Bar jacket might seem very classic to a novice, the fact of showing it in its original context brings out all the iconic strength and inspiration of a model that crystallized a period of searching in the world of fashion.

F.M.: We show its resonance in the world of the 1940s and 50s. Its lasting impact is attested to by the number of designers who have been inspired by Dior over the years, which proves that the brand belongs to the history of haute couture. We asked a number of designers to show models inspired by the Bar jacket, and we had some very enthusiastic responses. From the Balenciagas, Lanvins and Balmains who echoed him in his era, to contemporary models by Dries Van Noten, Thom Browne or Comme des Garçons, there are no less than 25 fashion houses or couturiers who are represented.

It was this ide a of sculpting clothes that was new at the time?

F.M.: Absolutely, it was one of Dior’s key ideas: starting from the female body and embellishing its natural architecture through the cut and choice of fabrics.

O.G.: The silhouette of the New Look has a certain resonance with creations in other disciplines. The modernity of line in Dior’s clothing recalls Jean Prouvé’s furniture, for example. It was part of a whole aesthetic moment.

How, in just ten years , did Christian Dior manage to construct a brand that would survive him?

F.M.: He managed such a feat because he believed in the idea of a total art. Right from the start, he designed his couture house from a global perspective, from the décor of the salons to the packaging, from the clothes to the make-up and other accessories. He’s the only couturier who launched a perfume right at the start when he founded his brand. It was a colossal enterprise, and he turned to his friend Serge HeftlerLouiche, ex-director of Coty, to help him out.

O.G.: Dior was the perfect incarnation of a couturier who went beyond the usual boundaries of his profession. He loved French and Italian opera, which isn’t without significance in his manner of imagining a total art. In that respect he’s a child of the 19th century. He was fascinated by Art Nouveau, which was one of the last attempts in Europe to create a total art merging urbanism, architecture, textiles and furniture.

F.M.: Very early on he also launched a line of lingerie, which is very important if you’re seeking to reshape the female silhouette. He also designed shoes and jewellery, which he had made by the best firms in Europe. It was the first time that anyone constructed a worldwide network of licensing based out of Paris.

His intuition also led him very early on to think about his image, particularly with respect to dressing Hollywood stars.

F.M.: Absolutely. He soon put together a press team who managed his image. When his H line caused a scandal, because it was thought it might flatten the curves of Hollywood stars, Dior called a press conference and made use of Jane Russell’s presence in Paris to demonstrate exactly the contrary 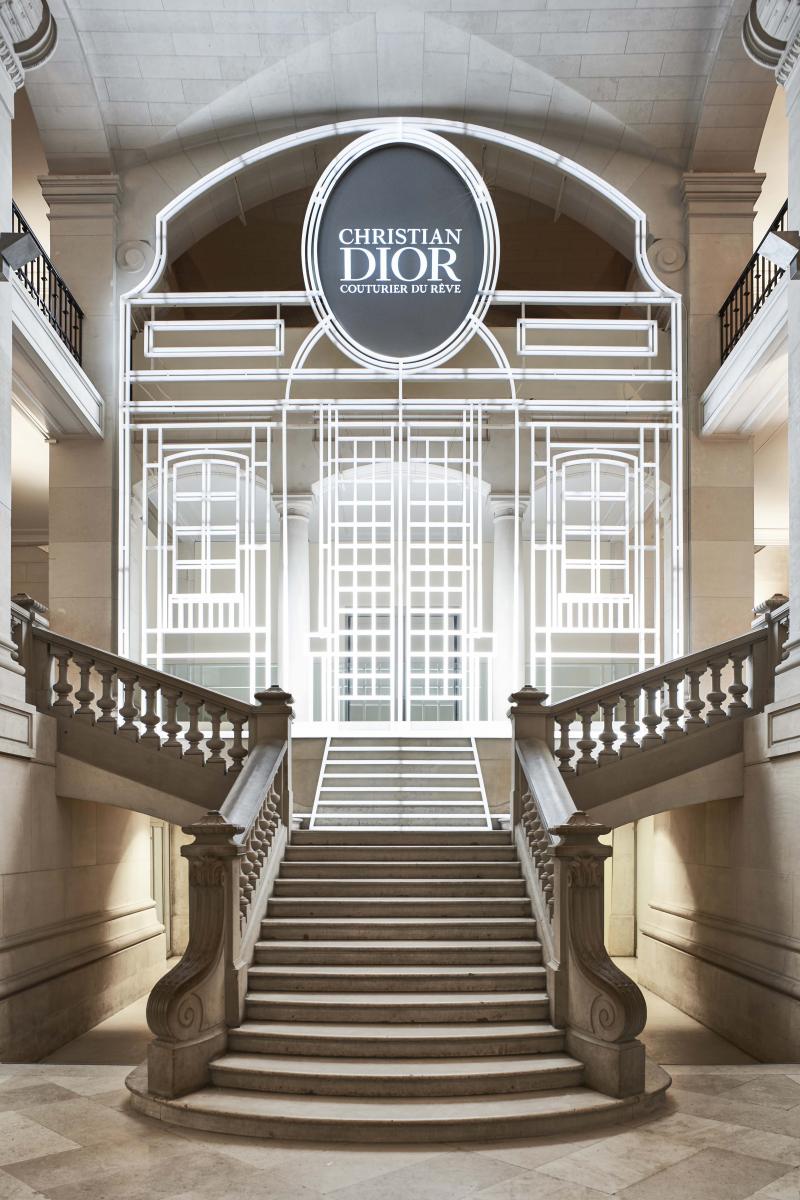 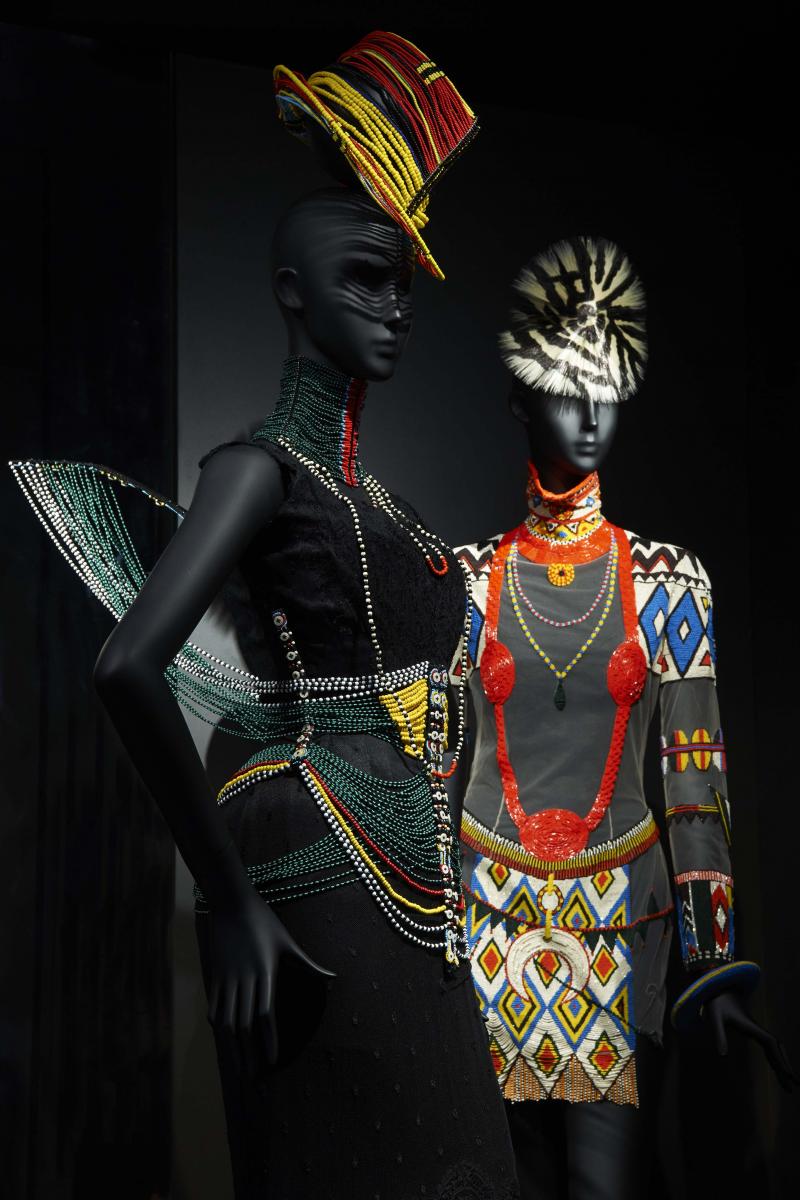 He’s often perceived as being rather bourgeois, which somehow doesn’t sit with the art galleries he ran before founding his fashion brand.

O.G.: Dior was passionate about the cultural life of his times. There’s probably not a première or a major exhibition that he didn’t see in Paris William Klein back then.

F.M.: The Vicomte de Noailles came regularly to his gallery. He bought works from him by artists who were still unknown at the time, particularly a Giacometti which he placed in his villa in Hyères.

O.G.: In fact his bourgeois airs made him credible in the eyes of collectors, because at the time a lot of gallerists had a reputation for being a little dodgy.

F.M.: At the time, running an art gallery was considered rather infra dig for a bourgeois family, a mercantile activity like any other. Dior’s father lent him money on the proviso that he didn’t call the gallery “Dior.” Later in his career Dior supported avantgarde artists who were reviled by the bourgeoisie. When Dalí became famous after making the hugely scandalous Un chien andalou with Luis Buñuel, he signed a contract for several exhibitions in Dior’s gallery. In his memoirs, Dior recalls arguments with his father which would often end up with him calling him a “damn bourgeois.” 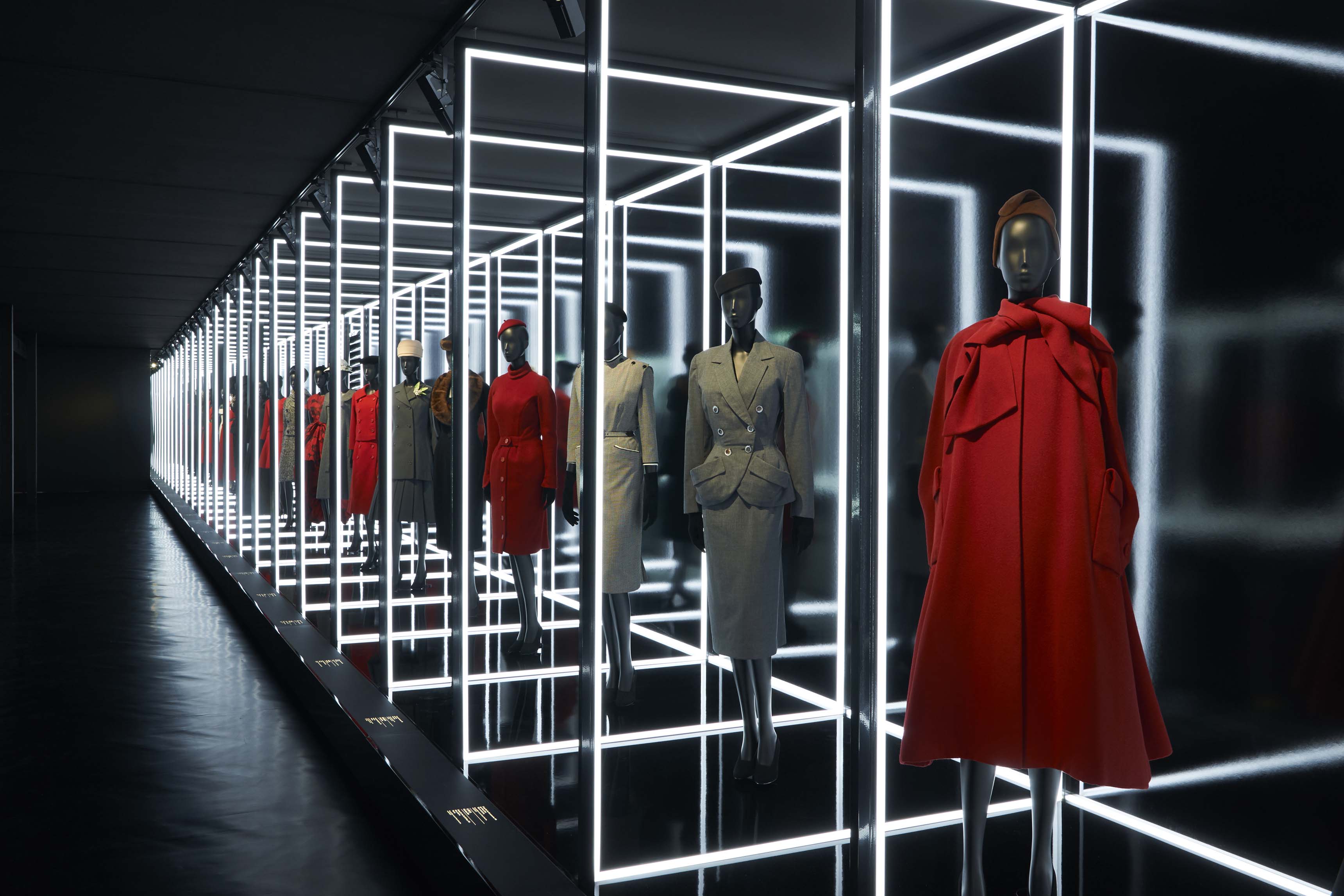 Christian Dior was also a big fan of museums.

O.G.: Yes, he was fanatical about them, and he knew the Musée des Arts décoratifs very well. He even lent us some pieces for a 1955 show about 18th-century Parisian cabinetmakers, which says something about his curiosity and his status as a collector. During the same exhibition, he was also invited to show a couture collection.

F.M.: We’re thrilled to be able to show the public images of that event, which demonstrate how much of a maverick he was at a time when fashion was nowhere to be seen in museums.

Which were the collections that lent you dresses for the show?

F.M.: There were many sources – the Met, the V&A, the Palais Galliéra, the Dior Museum in Granville, the Musée des Arts décoratifs to which Christian Dior made a donation, and the fashion house itself, which today owns the biggest collection in the world.

How do they manage their enormous holdings?

O.G.: The company has made a huge effort with its heritage since 1987, the year of the last big show, and which is also when it was bought up by Bernard Arnault. Today fashion houses have become very powerful centres for their own heritage, with proper conservation and exhibition programmes. This show demonstrates that fashion houses have now become major cultural players in their own right. 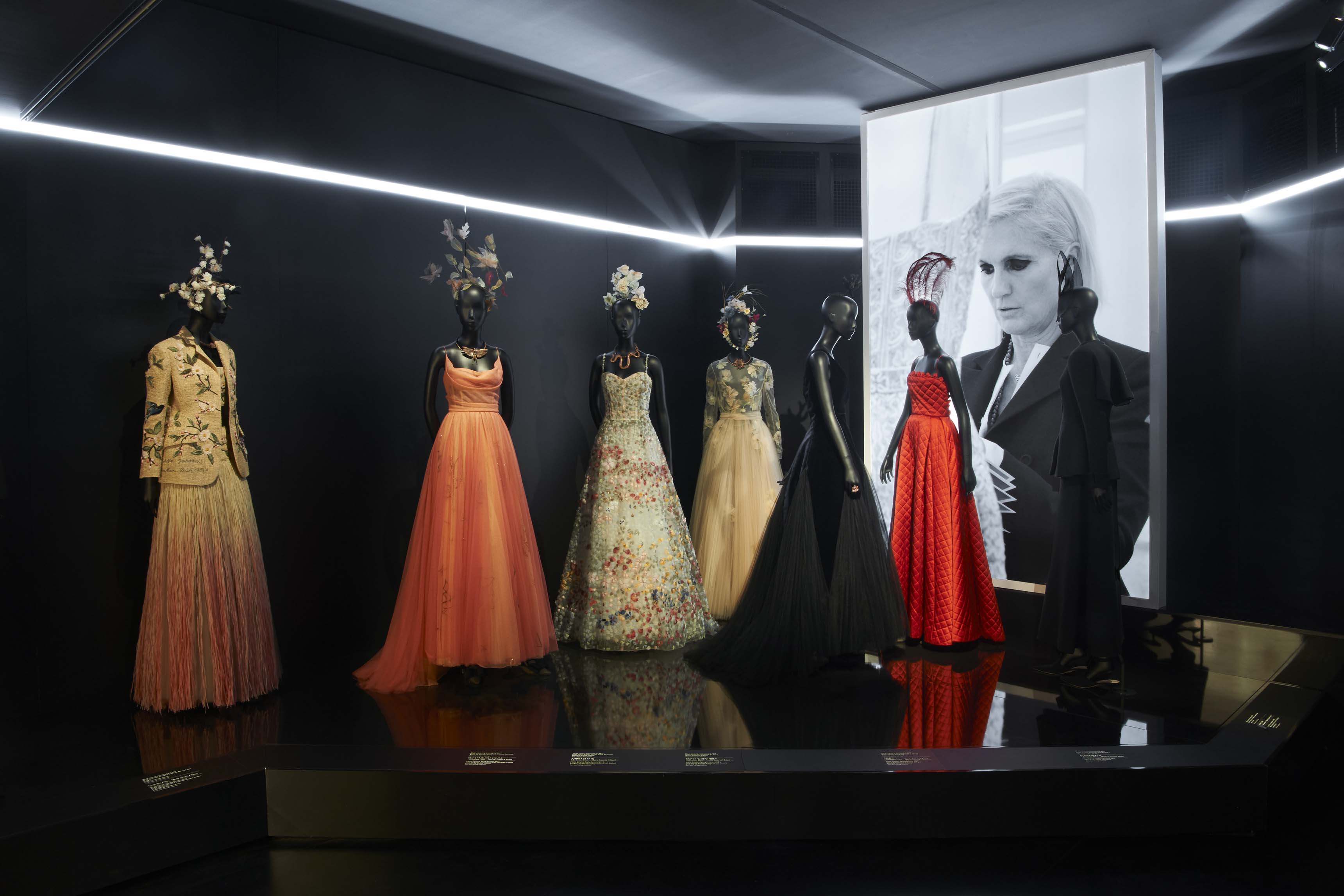 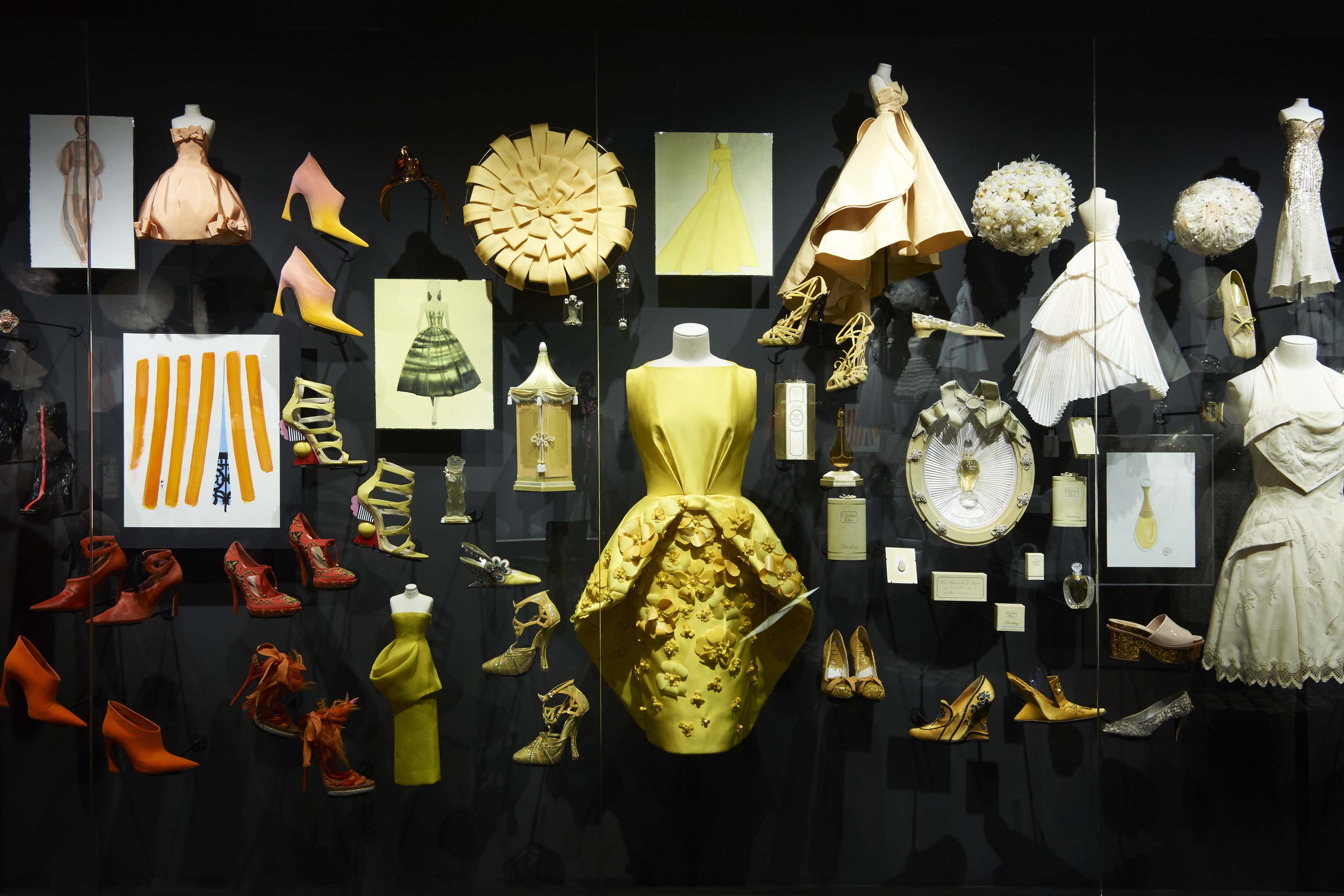