Forty-seven years ago, long before he came a major figure in the world of performance art, a young art student decided to shut hiself up in a university locker for 120 hours... 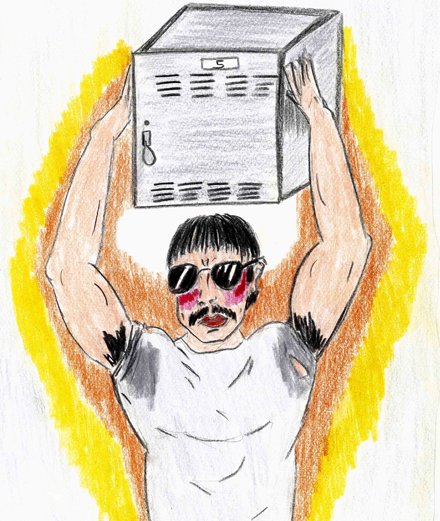 Aged 25 and still a student, the young Chris Burden (1946–2015) realized his very first performance in the context of his Masters in Fine Arts at the University of California, Irvine, where he had enrolled in 1969. The performance began on 26 April 1971, when Burden padlocked himself inside a university locker, where he would remain for five days straight. The locker he chose was number 5, the central one in a three-level bank of identical lockers: in the one above his, he installed a 5 gallon water bottle, linked to his locker by a tube; another tube linked up to an identical, but empty, bottle in the locker below, so he could urinate. Each locker measured 60 x 60 x 90 cm.

His wife, Barbara Burden, slept on the floor outside locker number 5, “in case I really flipped out, or something,” as he later explained. Burden had imagined the performance as an isolation experiment, but “something” did indeed end up happening. People with no particular interest in art started showing up, turning the performance into “a public confessional where a steady stream of people would come to talk to me,” as Burden afterwards recounted. He explained that in the end he was overtaken by the sensation of his own vulnerability, not in relation to his self-imposed physical incarceration, but for fear that one of the onlookers might attack him. When Peter Schjeldahl, the renowned New Yorker critic, asked him why he’d done it, Burden replied, “I wanted to be taken seriously as an artist”. On 30 April 1971, soon after emerging from his locker, Burden obtained his MFA. This inaugural performance is known today as Five Day Locker Piece. As for locker number 5, it’s still there, right where Burden left it. The day after his death, on 10 May 2015, someone stuck a sheet of paper on it that read, “RIP Chris. We miss you already.”