As well as being a talented painter, American artist Eliza Douglas is also a musician, a model for Balenciaga, and the muse of German artist Anne Imhof. In her painting series, fragments of bodies are mixed with details of clothing, giving rise to a strange universe that is characterized by a surreally absurd detachment. 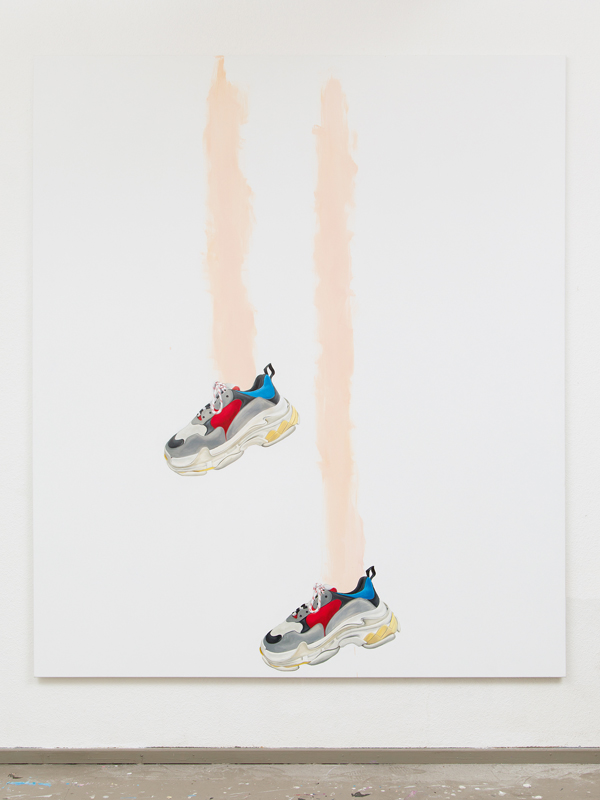 Just a few years ago, Eliza Douglas decided one day, without ever having studied art, to send an email to the artist Willem de Rooij asking to join his class at the Städelschule in Frankfurt. After being accepted, she left New York and over the following two years produced a body of work that would change her life. For her first series, she painted fragments of bodies – hands and feet on a white background which she linked together with abstract lines painted with a large brush whose drips are also an important part of the picture. These works were followed by very large paintings that depicted the naked torsos and faces of skinny androgynous boys who looked like her and who she found in a casting agency’s face-book (Douglas herself has been modelling for the past couple of years in Balenciaga’s runway shows). Her characters pose in a décor of neutral apartments that she has painted by commercial advertisement artists in China. Next in her oeuvre came a whole iconography of cartoon-style monsters, variations on a sort of green ogre, and after that a different series of hands. Most recently she’s come back to torsos, depicting close-ups of shirt pockets containing cigarette packs.

In parallel to her own practice, Douglas makes works in collaboration with her artist partner Anne Imhof for whom she has become one of the central figures in her performances, such as Faust at the German Pavilion at the last Venice Art Biennale, which won the Golden Lion. Numéro met up with Douglas in her new studio in New York, where she’s continuing her explorations into seriality, the relationship to the body and its fragmentation and representation.

NUMÉRO: How did you become an artist?

ELIZA DOUGLAS: I always thought it was the best job one could have, but up until recently didn’t think it was an option for me. I struggle with low self esteem, so I didn’t think I could make anything good and especially didn’t think I could make a living out of it. For most of my 20s I was in bands and then I studied social work. I worked as a waitress and a receptionist at a hair salon. It was only three years ago that I was finally ready to study art – I realized that I would regret it for the rest of my life if I didn’t at least try to do what I wanted to do. I went to the Städelschule in Frankfurt and studied in Willem de Rooij and Isabelle Graw’s classes. I graduated from the school last year

How were you influenced by the context you were raised in?

In terms of general influence I feel lucky that I got to grow up in New York City, for obvious reasons such as the diversity of the population and the cultural richness. Something that influenced me in terms of art was that my mother constantly took photographs and was very good at that, so I grew up around someone who regularly made beautiful images out of their experiences. What was you first encounter with art? I wasn’t particularly interested in “fine art” as a kid. The first music I ever got into was The Beach Boys. And I loved going to live shows – I went to see Cats on Broadway, and T h e Nutcracker, and adored them.

What was you first encounter with art?

I wasn’t particularly interested in “fine art” as a kid. The first music I ever got into was The Beach Boys. And I loved going to live shows – I went to see Cats on Broadway, and T h e Nutcracker, and adored them.

What art do you enjoy today?

I’m starting to collaborate with my friend Puppies Puppies – she just sent me a photo of a painting of a zombie she found on the street.

What was the idea behind your portrait series that mixed young models and images of interiors?

I started the series because I experimented with various painting companies in the Dafen artists’ village in southern China, and really liked the results of one of them. When people were painted onto the backgrounds, they ended up looking subtly surreal, in an almost CGI kind of way. So I made many images of boys standing in rooms that I’d bought off stock image sites. I had them painted, and then kept the ones I thought turned out well. I ended up keeping about a third of them.

You always work in series. Do you finish one before star ting the next, or are they sometimes concomitant?

So far I have only felt like I made one series to completion. I don’t set out with a specific idea about finishing a series, I just feel it out. I like the idea that a series might slowly morph over time and eventually not resemble its former self. Which I think is what’s happening with the Hands series.

”I always thought it was the best job one could have, but up until recently didn’t think it was an option for me.”

The most famous, with the hands and feet, is made in China by someone else. Can you expand on that concept?

Those paintings are not made in China, they’re made in my studio! And I don’t really think of them as being made by someone else... I hire someone to paint the hands because I don’t have classical painting training. I do this mostly for pragmatic reasons. Sometimes I have an idea and a certain technique is necessary to realize that idea. With this series, I wanted the hands to be skilfully painted and to look a very specific way, so, like so many artists out there, I hired someone to do what I’m not able to do myself. The other aspects of the paintings I do paint myself. Usually this is in the form of messy brush strokes, abstract shapes, etc.

What about your projects with Anne Imhof?

I’m involved in her performance pieces, and we also make paintings together. I’ve performed with her for the past two years, and co-wrote the music for Faust. We also work out scenes and choreography together. In terms of the paintings we make, she and I had a show of these works at Galerie Buchholz in New York last fall. Some of the paintings were more conceptual and evolved out of discussions we had, while others were just made on the spot, and sometimes even involved us passing a paint brush back and forth between us.

The new paintings you’re producing depict close-ups of shir ts with cigarette packs in the pockets. What inspired them?

This series began because I saw a guy in a plaid shirt and in his pocket was a pack of loose tobacco. What was revealed of the pack was just the warning image. It was a photograph depicting an impotent man. I asked to take a photo of this and I kept thinking of it afterwards, so finally I made this photo into a painting. I liked the way it looked, so I made more, experimenting with different textiles and various warning images.

What’s your relationship with fashion? For a while now you’ve been involved with Balenciaga.

When Demna Gvasalia took over the artistic direction of Balenciaga a couple of years ago, Lotta Volkova, who was helping with the casting, contacted me and asked me to come meet them and potentially walk in the first show. I was expecting they wouldn’t want me because I wasn’t a model – I generally feel really awkward, and I’m so much older than most models, but for some reason they wanted me and I have been doing their shows and campaigns ever since. That is the extent of my involvement in fashion.

You seem ver y comfortable in different media – is there one you prefer?

Is there anything you would like to make people conscious of through your art?

What other people think is none of my business. 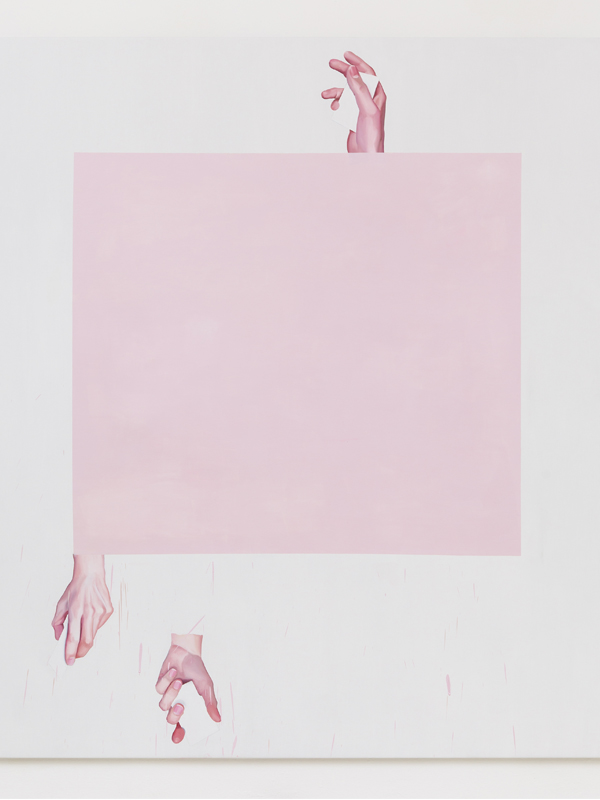