At the Perrotin Gallery, the American artist and social network star is presenting some twenty copies of antique masterpieces recoloured and eroded using a crystallisation technique. A journey through time that challenges the frozen vision of art history, in a similar way to Damien Hirst, Francesco Vezzoli and Ali Cherri. 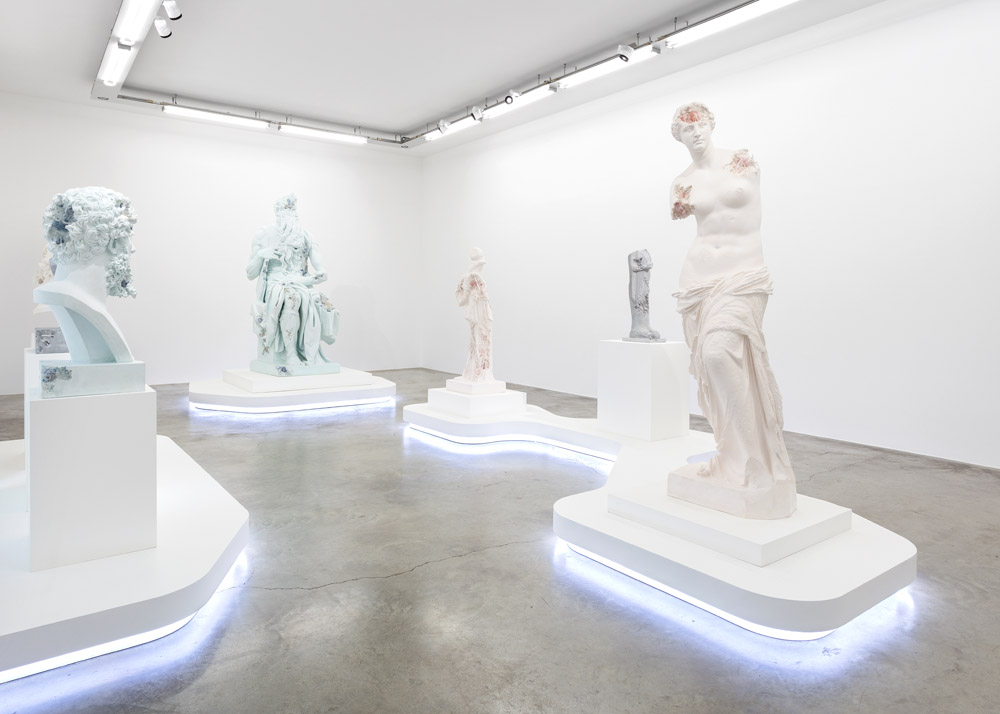 View of the exhibition “3020” at Perrotin Paris Photo: Claire Dorn © Courtesy of the artist and Perrotin

It took Daniel Arsham two years to organise this iconoclastic, yet very on-trend project. By collaborating with the moulding workshop at the Réunion des Musées Nationaux, the American artist has reproduced to-scale iconic works from classical antiquity preserved in Europe’s greatest museums. Sculptures from the Louvre, but also the Acropolis in Athens, the Kunsthistorisches Museum in Vienna and the Basilica di San Pietro in Vincoli in Rome have been deployed to three vast rooms at the Perrotin Gallery in Paris and will stay there until March 21st. Straight copies?

No really, because Daniel Arsham has subjected these reproductions to the erosive work that he's known for. As if exposed to violent weather or millennia under the oceans, the sculptures are attacked here and there by a crystallisation phenomenon. The crystals formed over the flesh of Venus de Milo and Michelangelo’s Moses contaminate their bodies to the point of dyeing them a pastel blue or ash black. “The crystal and the colour both come from a chemical procedure done using volcanic ash or selenite,” the artist explains to us, “The crystal is particularly fragile. Spill any water on it and it will disintegrate. There’s a sort of scientific experiment in it.” 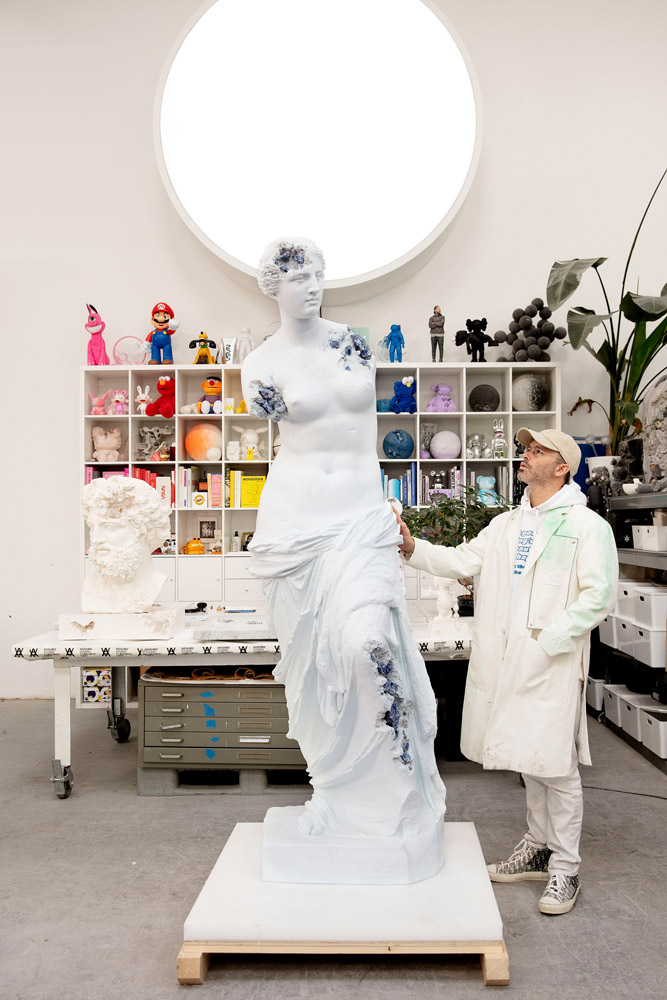 Portrait of Daniel Arsham in his studio Photo: Guillaume Ziccarelli © Courtesy of the artist & Perrotin 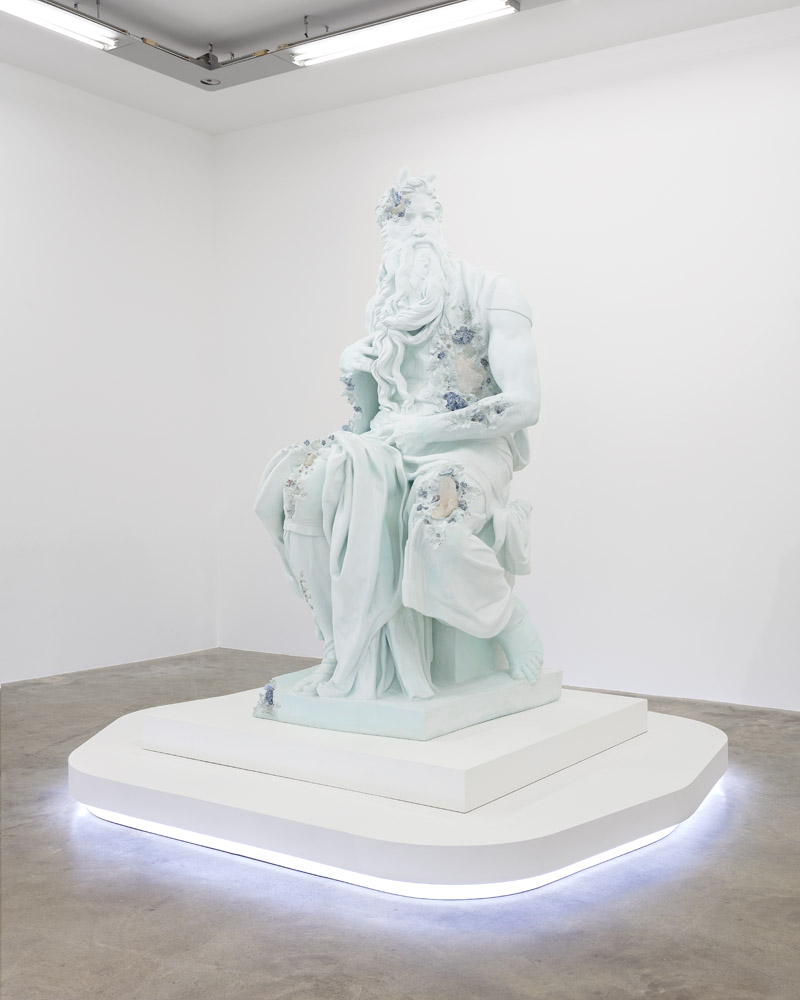 Daniel Arsham has been playing with these processes for the last 20 years. While he was still living in Miami and part of the young artistic avantgarde there, he stood out for his works that were quickly labelled post-apocalyptic. Buildings, typical of the city, were covered and eaten away by a devouring tropical forest. Nature reclaiming her space. Our current world reduced to vestiges observed from a distant future. Daniel Arsham has long established himself as a time traveller and the bard of a fictional archaeology. These works were already inviting us to change our perspective and to look at the world from the distanced viewpoint of a future archaeologist (what will remain of it? Do these vestiges of the future really embody our current world?)

With Daniel Arsham, the near past and the present become one with the future and collide before our eyes.

Daniel Arsham continued to make his mark by creating sculptures of technical objects that are now obsolete. Revox tape recorders, computers and synthesisers were also attacked by time, decayed, ravaged by millennia, appearing as antiques even though they were only a few decades old. Arsham plays with time by turning artefacts of our era into those from long ago. The speed of technological obsolescence is put into perspective with the longer temporality of the universe in a sort of dizzying acceleration. These works question our linear vision of time – a vision that is profoundly Western. With Daniel Arsham, the near past and the present become one with the future and collide before our eyes. Time – like the crystal matter that dissolves in water – reveals itself in its most fragile, inconsistent and versatile state. 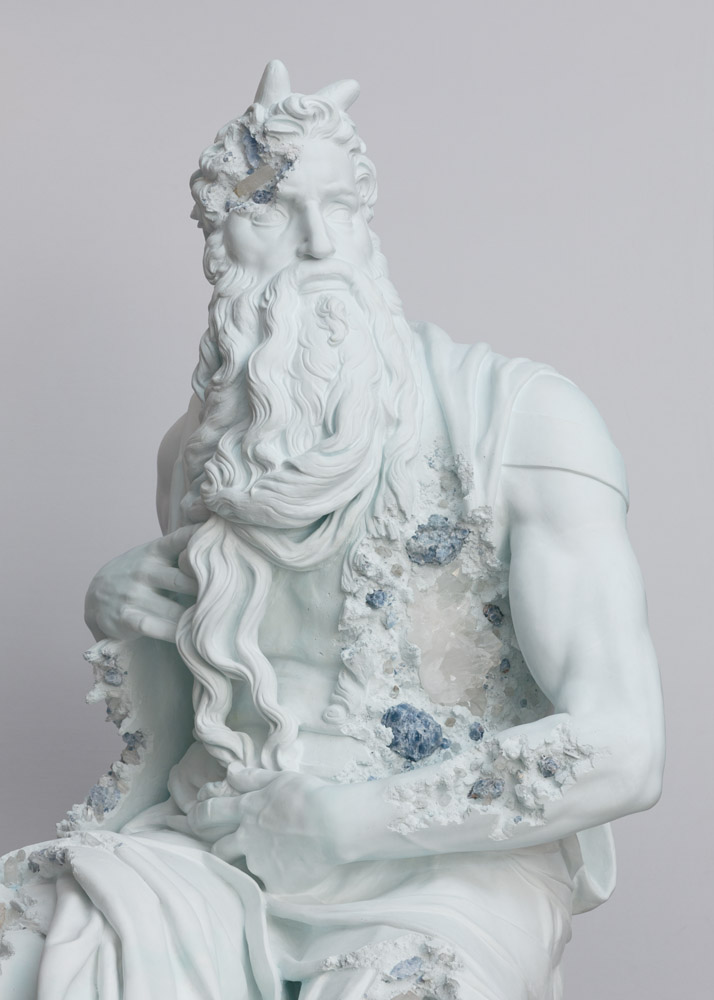 At the Perrotin gallery, this relationship to time is accompanied by a questioning of the official narratives that have shaped the history of art. “When you take a close look at the exhibits in museums,” explains Arsham, “you realize that our notion of original work needs to be completely rethought. A Greek sculpture from the 7th century BC is influenced by Egyptian art without the artist himself being aware of it. He was able to draw inspiration from it through contributions from other countries. Above all, the way in which we present these pieces in museums as definitive, is pure historical construction. Until the Renaissance, you could very well take a recent bust and attach an antique sculpture head to it. In the case of Venus, the work had always been presented face-on in the museum. And yet specialists recently discovered that it was initially positioned in profile. The image that we all have is an historical accident.”

"The way in which we present these pieces in museums as definitive is pure historical construction." Daniel Arsham

This deconsecrating of art works by putting them into a historical flux in constant motion was also recently demonstrated by Damien Hirst. Who could forget the impressively dramatic return of the British artist into the heart of François Pinault's Venetian museums? His storytelling went like this: in 2008, a team of divers discovered a collection of precious artefacts off the coast of East Africa that had been buried under the water for two thousand years. The exhibition brought together the 100-odd objects that had been found: giant sculptures encrusted with coral, Greek statues, a bronze sphinx, a Buddha, drawings, precious pieces, golden jewellery… Obviously none of it was real. All the pieces, each one as enormous as the project itself, had been made in the artist’s studio. Indeed, among the pieces dredged up from the depths (and there are videos to prove it) were sculptures of Mickey Mouse and a Transformer robot…

We recently saw this iconoclastic dimension in the work of Francesco Vezzoli who explained to Numéro art that he takes “blasphemous approach”.

Damien Hirst, just like Daniel Arsham, draws not only from a repertoire of historical artistic forms but both artists have also penetrated domains reserved for historians and scientists to explode all sacred certitudes relative to art. We recently saw this iconoclastic dimension in the work of Francesco Vezzoli who explained to Numéro art that he takes a “blasphemous approach by buying original antique pieces from auctions that are then painted in the colours that they supposedly had originally.” (The pieces presented in the Collection Lambert in Avignon in 2018).

For several years, Ali Cherri has been focusing on the place of the archaeological object in the construction of historical narratives. Archaeological objects, vases or sculptures, that the Lebanese artist also bought from auction houses, are then recomposed and reassembled. A paradoxical gesture that deconsecrates the ancient object and decontextualises it to question its value. Why do we value such an object? What does this valorisation of the archaeological object say about ancient times, about our times? How does it take part in constructing a national history? With Ali Cherri, Damien Hirst, Francesco Vezzoli and Damien Arsham, the past context is always confronted the present context... to reveal it all the more. 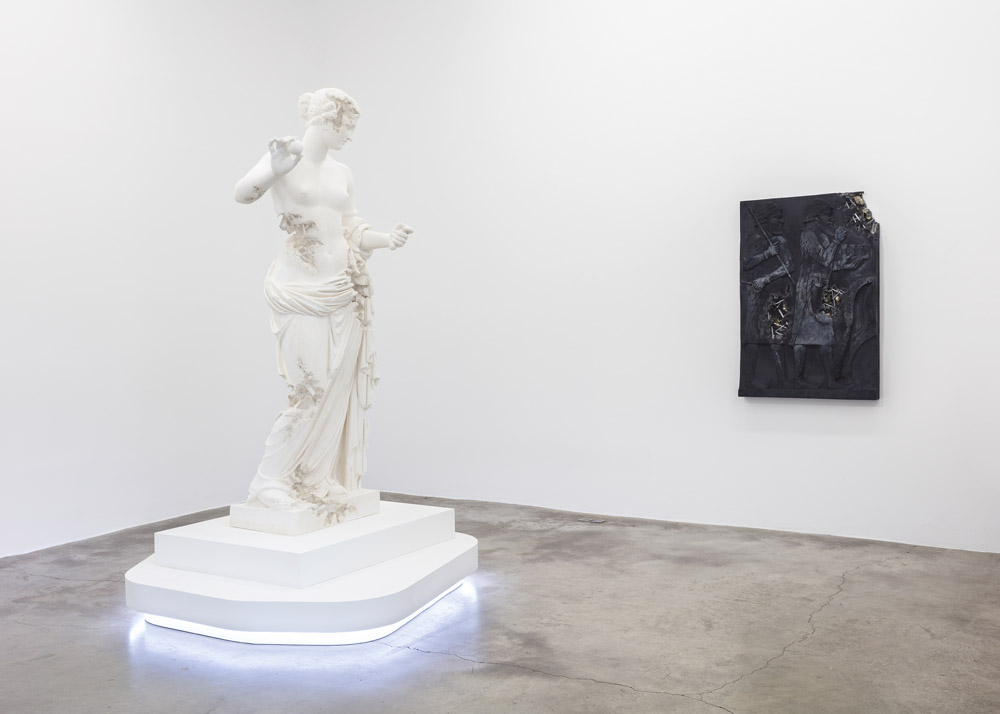 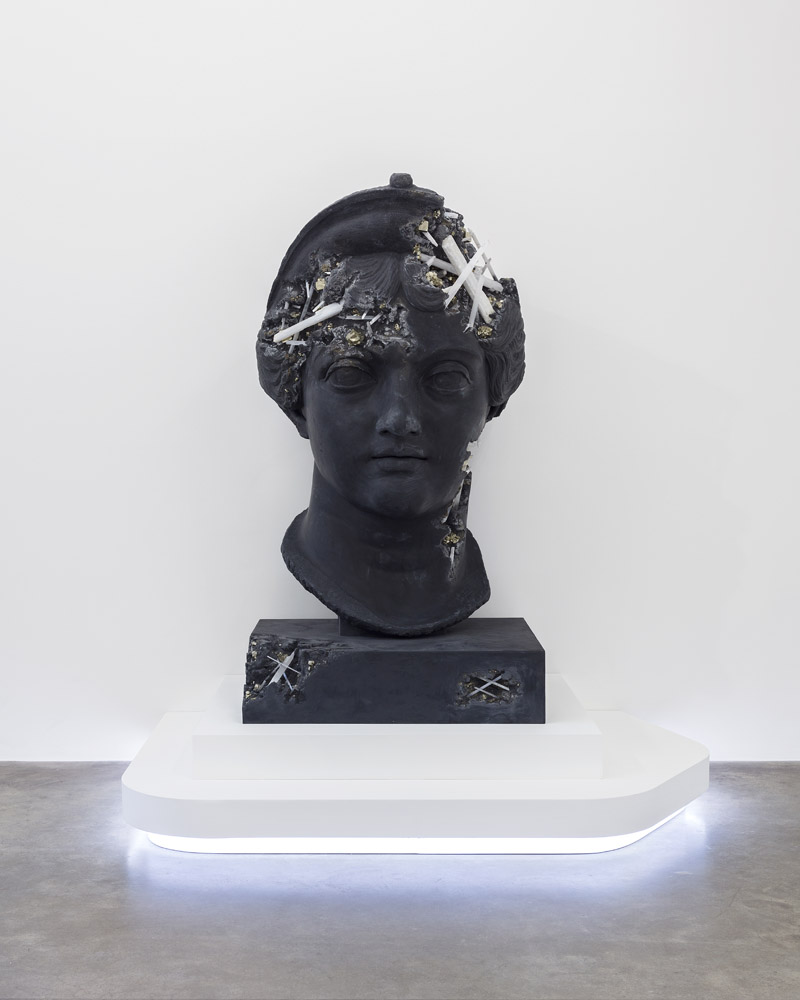 View of the exhibition “3020” at Perrotin Paris Photo: Claire Dorn © Courtesy of the artist and Perrotin