“Ozone,” the trailblazing 1989 exhibition for the environment

Thirty years ago, four young French artists – all of whom would go on to have successful international careers – blazed something of a trail with their exhibition “Ozone,” which took as its subject ecological and environmental questions. While today this has become a ubiquitous theme in contemporary art, back in 1989 it stood out as a pioneer. 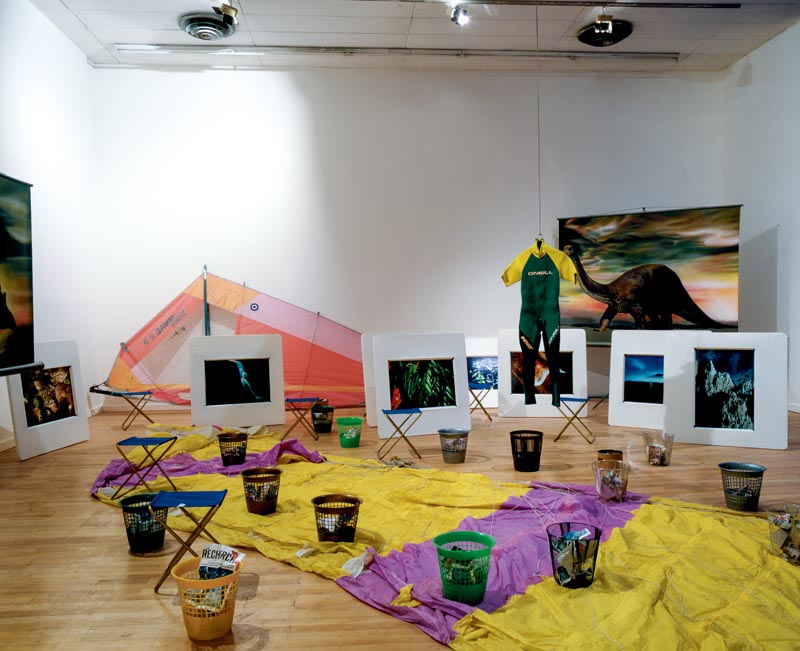 Some works take on, over time, a symbolic dimension that goes beyond them, and their place in the life of artistic forms becomes accentuated after the fact. Accidentally destroyed by fire 12 years after its creation, like a rock star carried off by an overdose, the subject of this essay is the perfect illustration of the phenomenon – and the hashtags #Iconic and #Mythic that proliferate without the slightest discernment underneath photos of artworks on social media will surely be applied here. But, because the work in question was made at the end of the 80s by very young artists, photos of it are rare, and it’s therefore only really by recounting its story that justice can be done to this very particular project, which marked the career début of a number of artists who afterwards went on to achieve international careers and stardom.

Exactly 30 years ago, four young French artists who had studied at the École des beaux-arts in Grenoble, each of whom had already begun a solo practice, came together for a collective project that was concretely expressed in three ways: principally an exhibition, but also a bag containing a portable version of the show, and, as a teaser, a video made to be projected onto a giant inflatable outdoor “television.” As a title, they chose the word Ozone, clearly indicating the ecological slant of their project. While this all seems very ordinary today, it was most definitely an oddity back in 1989 when “artists’ collectives,” whether temporary or permanent, were pretty much inexistent, and art was little concerned with ecological questions, few people having heard of the ozone layer, let alone the hole with which it was afflicted. More generally, the environment was not an everyday subject in the field of the arts, which, moreover, had not yet, as Bret Easton Ellis so aptly put it in his recent essay White, “replaced aesthetics with ideology.” 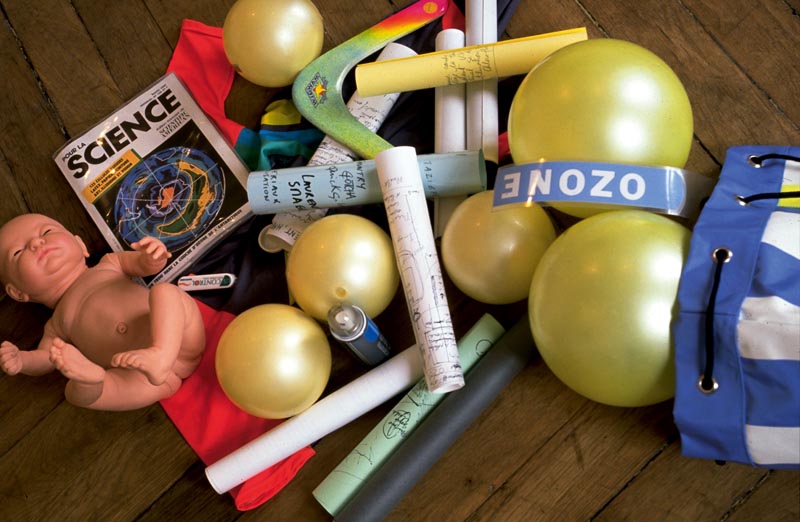 It was in this context that Dominique Gonzalez-Foerster, Philippe Parreno, Pierre Joseph and Bernard Joisten – all barely 25 at the time – put on Ozone, a collection of works and objects that took nature as its central theme. On two large portable projection screens, Joisten painted hyperrealist depictions of dinosaurs that harked back to a time when humans and their technology had not yet appeared, realizing them in a style more akin to school textbooks than anything in the history of fine-art painting. In coloured-plastic office waste bins, Gonzalez-Foerster collected photocopies, postcards and magazines connected with environmental questions – an image of the last tree at Chernobyl, for example, or visitor cards marked “a souvenir of Chico Mendes, seringueiro, Xapuri, Amazonia” (Mendes being a Brazilian trade unionist who died fighting to preserve the Amazonian rainforest) – and placed canvas folding seats next to them so that visitors could sit down to consult the assembled documentation.

Parreno showed contemporary sports equipment – a surfboard sail, a diving suit – while Joseph exhibited very large composite-plastic photographic slides, big enough to stand up alone, that showed interpretive digital modelling of natural phenomena: a computerized waterfall, an insect, various plants, etc. The ensemble came together to form a sort of ecosystem in which each part contributed to the equilibrium of the whole: the artists were not showing these works and objects to create an image for themselves, but rather, as they so eloquently put it at the time, organized things so that the exhibition “spread out in space like a gas,” without a dominant point of view. Precisely because it was curated in this way, and also through its didactic and pedagogical aspect (far from the artistic conventions of the times), its dissonant aesthetic choices (entirely indifferent to trends) and the incongruity of its subject matter, Ozone was splendidly idiosyncratic in the way it moved the goal posts of art practice. 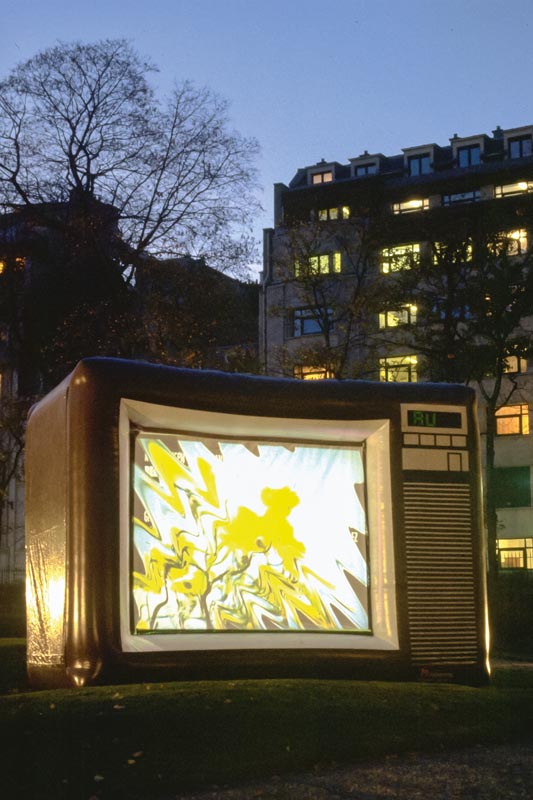 In an era that had yet to invent the bourgeois-bohemian ecologist (at the time ecology was associated with the far less sexy hippy movement), when nobody recycled their spent electric batteries or empty yoghurt pots in separate waste bins, few artists were interested in such questions and, to be frank, art was a lot less discursive and preachy than it has now become (sometimes to a sickening extent). In the U.S., the artist Meg Webster had been developing, since the mid 80s, an oeuvre made from soil, grass and moss arranged in forms that recalled minimalist art, such as her extraordinary Moss Bed Queen (1986), a cambered carpet of moss that she confronted with the display conditions of closed gallery spaces that often lacked natural light. In 1989, the American artist Ashley Bickerton created his “masterpiece” Seascape: Transporter for the Waste Product of its own Construction #1, a machine filled with rubbish of its own making that was intended to be released into the sea where, down in the depths, it would drag around as much waste as was necessary to its existence.

It was also at this time that an extravagant project was begun which, although kept largely secret, would most definitely nourish artists’ imaginations, not to mention those of the television producers who would later invent reality TV. In the Arizona desert, scientists set out to reproduce – under an imposing, hermetically sealed glass structure covering more than a hectare – a terrestrial ecosystem (the largest ever built) complete with seas, a coral reef, a tropical rainforest, a savannah, rivers, etc. Taking the Earth as the first biosphere, they called their project Biosphere 2, the idea being that they would live for several years, cut off from the rest of the world, in a sort of virgin Earth, or more exactly a place that would allow them to learn how to build an alternative Earth from scratch. Construction was begun in 1987, and although little was made public about the project (the first mission took place in 1991–93), the idea became a sort of oneiric generator of ideas in the minds of certain artists.

The ensemble came together to form a sort of ecosystem in which each part contributed to the equilibrium of the whole: the artists were not showing these objects to create an image for themselves, but rather, as they so eloquently put it at the time, organized things so that the exhibition “spread out in space like a gas,” without a dominant point of view.

At their Ozone exhibition, the four organizers included two extras: Sac Ozone, a bag containing a certain number of objects – Vulli balloons in different sizes, a fluorescent-green boomerang, a UV Control lip balm, a Mecanorma Jet Brush aerosol spray, an “ozone special” edition of the magazine Pour la science, a Cinelli suit, a plastic baby Berjusa doll, a 27 cm inflatable globe, etc. – that were intended to allow the show’s main ideas to be evoked in a portable version; and Vidéo Ozone, designed to be shown on giant inflatable “television” (which it was, in the garden of the Centre national des arts plastiques, at that time located in the Hôtel Rothschild in Paris), which consisted in a compilation of images produced in various formats – Super 8, 3D animations, HD video – that once more evoked the relationship between contemporary man and nature, and included the “prowess” sporting activities of Bruno Gouvy (snowboarding and paragliding) and Patrick Edlinger (rock-face climbing). In this way, the exhibition formed part of a more complex set-up that included its own promotion and merchandising – like a movie in a way, but certainly not like anything you would expect from your usual late-80s artwork.

Thirty years later, all of this has become rather ordinary: artworks today are willingly didactic, tackle ecology and a whole host of other subjects, and don’t appear extravagant if they include a large dose of self-promotion. In the evolution of things, Ozone was definitely a decisive moment, but one of which few traces now remain. Acquired by the FRAC Corse, Ozone caught light and was reduced to smoke and ashes during the night of 6 November 2001 when the reserves where it was stored were consumed by fire.