Awkwafina, the New York rapper who broke into Hollywood

Aged 31, the American singer Awkwafina has just won the Golden Globe for Best Actress in a Motion Picture Comedy or Musical for the film The Farewell by Lulu Wang, released in French cinemas today. Portrait of a singer-songwriter with a cause. 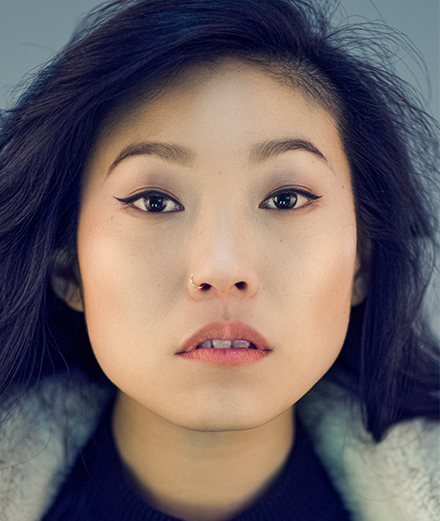 Last year she admitted to the Times: "Pretending to be a rich person is probably the hardest acting I’ve ever had to do". Born into a modest family with immigrant parents living in Queens, Nora Lum – her stage name is Awkwafina – has certainly paved her own way in life. From rap music to the movies via TV and YouTube, this young woman’s career has seen a dazzling turn in the past two years.

Thrust into the limelight thanks to My Vag, whose raw lyrics quickly went viral in 2012, Awkwafina started her career in music. “Awkwafina is a genius and her vagina is 50 times better than a penis” she declares without frills or metaphors: we were warned. Written in response to rapper Mickey Avalon’s track My Dick provoking violent criticism from certain feminists, My Vag re-appropriates the codes of rap where men loudly proclaim the superiority of their sex and their ascendancy over women. Hers is a sort of trash-feminism, where the terms pussy and vag are no longer taboo nor insulting but symbolise a powerful feminine identity. In that highly masculine environment, the singer’s lyrics went off like a bomb, upsetting a lot of people. Reflecting her commitment to fighting prejudice and sexual harassment, they denounce a very sexist universe tinged with racism.

Released with a four year interval, the albums Yellow Ranger (2014) and the slightly megalomaniacal In Fina We Trust (2018) explore vital social questions, all while reinforcing the image of an artist with an over-sized ego that she's constructed. Proud of her Asian origins, she denounces the prevailing racism that’s plaguing America and asserts herself as a strong woman who owes her success to no one but herself. In a duet with the famous actress Margaret Cho for the track Green Tea, she sweeps away any gendered representations and has fun with the stereotypes that still pursue the Asian community: “Flip a stereotype / How an Asian bitch got concubines ?” While she could be reproached for her occasionally simplistic words, the impactful effect they have on anyone who listens to her is undeniable: her hoarse voice against binary rhythms and the repetitive consonance of words composes the recipe for her short, catchy tracks. From the pedestal she’s put herself on, the singer sprinkles her lyrics with many compliments towards her own person, with dashes of humour and self-mockery further highlighting her singularity.

From Queens to the red carpet

During 2018, the singer’s career took an unexpected turn. Starring in three movies in the space of just a few months (Dude, Ocean’s 8 and Crazy Rich Asian), she was suddenly topping the bill alongside the likes of Rihanna, Cate Blanchett and Anne Hathaway. While her characters in the first two movies don’t directly address the issue of racism, her role as Peik Lin Goh in Crazy Rich Asian by Jon Chu fits perfectly into her favourite theme. The first Hollywood movie with a 100% Asian cast since The Joy Luck Club (1993) by Wayne Wang, the film was a box office smash in the US grossing more than $120 million. As the new darling of Hollywood blockbusters, the actress is busy forging herself the image of an extravagant and obsessive actress.

In 2019 with the movie The Farewell, she made a sensational entrance into the drama genre. Plunged to the heart of a Sino-American family devastated by the news of their grandmother’s incurable illness, she plays Billi, a writer torn between two opposing cultures. Echoing her origins and her own personal dramas (her mother died when she was just four-years old), the film questions the complexity of a dual-cultural identity. Awarded this Sunday at the Golden Globes for her performance, Awkwafina is the first Asian actress to ever receive the prize for Best Actress in a Motion Picture Comedy or Musical. Now inescapably under the spotlight, this promising artist is the figurehead of a new generation of women whose voices are loud... and proud.