Billie Eilish behind the soundtrack of the next James Bond

Singer Billie Eilish will be performing the soundtrack to the next installment in the James Bond saga, “No Time to Die”. After a debut album loved by the critics in 2019, the 18-year old Californian is set to become the youngest artist to interpret the theme tune for the adventures of the legendary British spy.

For Billie Eilish, dying is a long way off. At the tender age of 18, the Californian singer has been chosen to sing the main theme tune for the 25th James Bond film, No Time to Die. A project that doesn’t seem to intimidate her in the slightest, Billie Eilish has been filling concert halls around the world since the release of her debut album, When We All Fall Asleep, Where Do We Go ?, released in 2019. Her world tour sold out from Miami to Mexico, London to Berlin.

The decision isn’t that much of a surprise, when you know the dark and slightly tortured world of this young American. From Bad guy to Bury a friend, her tracks have become the gothic hymns for an entire generation of teenagers. An atmosphere that strangely suits the melancholic edge of the spy's latest adventure. Indeed, No Time to Die follows James Bond after he has retired from the secret service. It is also set to be the last time that actor Daniel Craig steps into his shoes. Behind the camera is American director Cary Joji Fukunaga, who was the scriptwriter for the series Maniac (2018) and the director of True Detective (2014). The cast of Daniel Craig, Léa Seydoux and Ralph Fiennes, who were already present in the previous opus, are joined by Ana de Armas (Blade Runner 2049) and Rami Malek, who won an Oscar last year for his role in Bohemian Rhapsody. 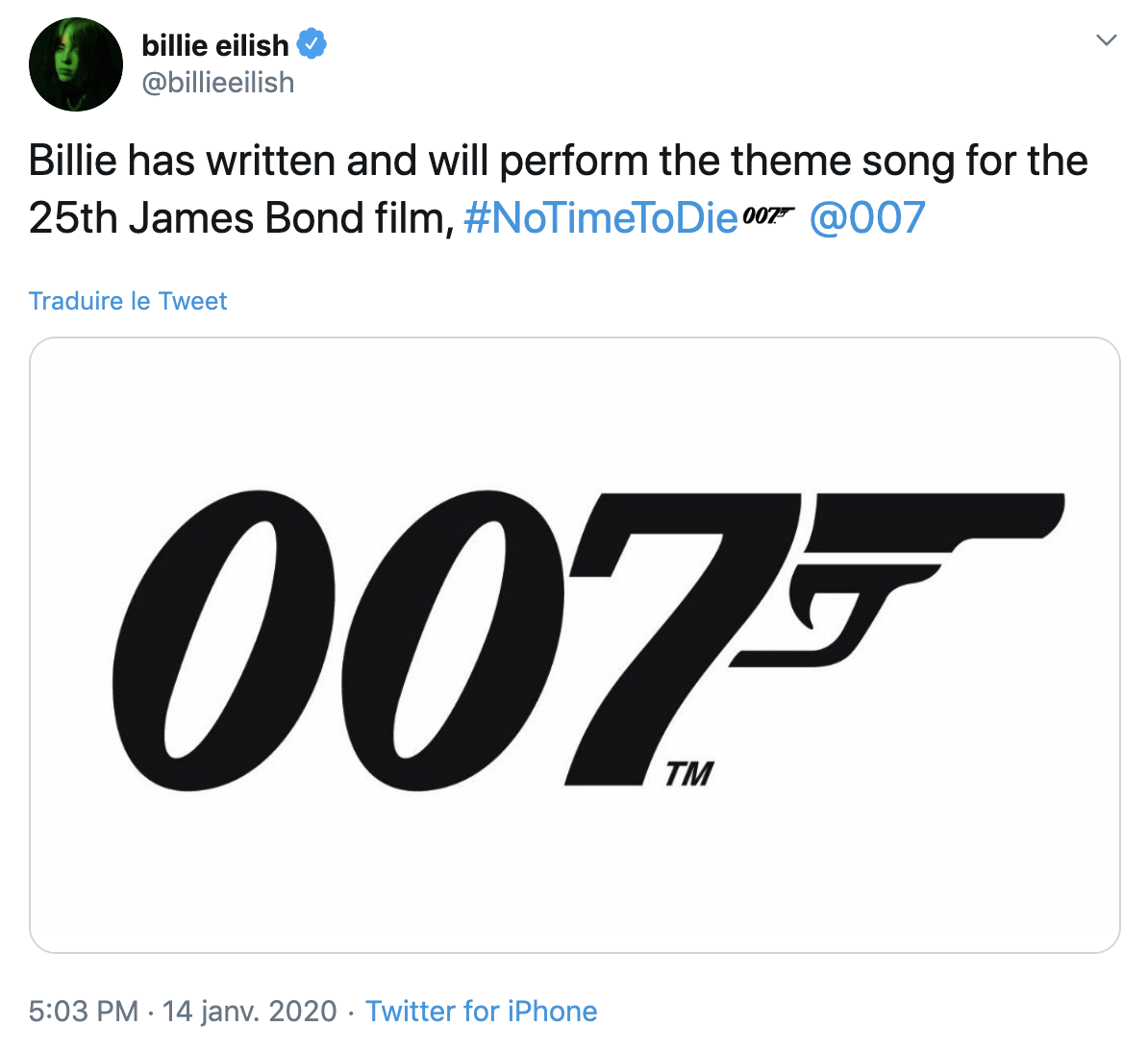 The artist revealed the news on her Twitter account, and the song has been written by both Billie Eilish and her brother Finneas (her regular collaborator): “It seems crazy to be part of this project. Producing the main theme tune for the film from such a legendary saga is an immense honour. James Bond is the coolest franchise in the world. I'm in shock,” she told her Twitter followers. As the youngest artist to ever collaborate on the theme tune of the cult saga, the mere mention of her name is enough to modernise a concept that’s almost 60 years old.