The sun shines on the streets of San Francisco in late autumn 1996, when my gaze is suddenly drawn to the movie title adorning the façade of the Castro Theater: Hustler White, as simply as you or I might say ‘sky blue’ or ‘candy pink’. The film is co-signed Bruce LaBruce and – what a coincidence – Rick Castro, two major figures of the American gay underground. I buy a ticket and step inside the legendary movie theatre, a vestige of the Spanish colonial baroque style. It was built in 1922 by Timothy L. Pflueger at 429 Castro Street, and just like Radio City Hall in New York and the Gaumont Palace in Paris, comes complete with a huge organ that was played during intervals.

The lights have just gone down over the handful of other viewers who look up at the punk hardcore title and the opening credits against a blue backdrop, intercut with parallel shots: a man lying dead in a jacuzzi, a voice-over telling us how he got there – in a very direct pastiche of Sunset Boulevard – then a plane landing at Los Angeles airport. A “European writer” gets off the plane dressed in a black suit and tie. He answers to the name of Jürgen Anger, an obvious tribute to gay Satanist Kenneth Anger, writer of the smouldering Hollywood Babylon and director of the no less scandalous Scorpio Rising. A few acerbic remarks to his driver, in a voice that would like to be vaporous, and other thoughts uttered into his Dictaphone reveal that the writer is an odious and pretentious gay man who’s come to the City of Angels to research the world of gay prostitution and the local porno industry.

All of Bruce LaBruce is right there in those opening minutes: his taste for collage, misappropriation and provocation. But the best is yet to come: in his search for a hustler played by Tony Ward who he’s fallen madly in love with, Jürgen Anger, played by LaBruce himself, comes across an array of the most colourful characters: a prostitute who provides anal sensations to his clients by penetrating them with his leg stump, a blond teenager sodomised by a chain of Afro-Americans and Latinos, and a masochist who likes to be burnt with cigarettes and have his back cut with razor blades, played by none other than Ron Athey, the famous body artist. Perfectly framed, edited and set to music, this catalogue of the most avant-garde gay outrages ironically ends like the most classic of Hollywood clichés: after taking Ward’s body out of the jacuzzi into which he’d fallen and knocked himself out on Malibu beach, Jürgen Anger realises he is still alive and the two deep throat kiss for a while before dancing away on the sand. Was it the comedy of the year? Of the decade? There was no denying we hadn’t seen anything as insolent and zany for ages and that this spiritual love-child of Andy Warhol, Paul Morrissey and John Waters should be closely followed.

Canadian Bruce LaBruce was born Justin Stewart on January 3rd 1964 in Southampton, Bruce County in the Ontario Province, and grew up on a farm in Tiverton on the Huron Lake, about 200 miles north east of Toronto, where he lives today. You wouldn’t be wrong in thinking that his artist’s moniker, devilishly anaphoric, refers to Bruce county and the nuclear power station with the same name. Just five miles from the family farm, this energy plant, for a long time the most powerful in North America, is the biggest on the planet since the shutdown of Kashiwazaki-Kariwa following the Fukushima catastrophe. Bruce LaBruce’s passion for movies comes from his parents because they let him watch the classics with them on TV and took him to drive-ins to see movies banned to under 18s. Flicks like Night of the Living Dead, which proved to be a powerful influence as seen with his films Otto; or, Up with Dead People and L.A. Zombie, both made in the 2000s.

Another major artistic influence dating from his childhood, is That Cold Day in thePark, by Robert Altman, which he also saw on television. “For me, that’s what pornography was: a totally crazy woman who brings home a boy she’s met in the street and shuts him in her guest room to make him her sex slave. It was nothing like Jerry Louis and Dean Martin, and it made such an impression on me that we could even consider my first film No Skin Off My Ass, as a gay pastiche of Altman’s film or more like a non-authorised adaptation of Richard Miles’ novel.”

“That Cold Day in thePark, by Robert Altman? For me, that’s what pornography was: a totally crazy woman who brings home a boy she’s met in the street and shuts him in her guest room to make him her sex slave.”

Thanks to Jürgen Brüning, a German producer who’d come to recruit new talent in Toronto, No Skin Off My Ass, filmed using a Super 8 camera with a soundtrack played on a tape recorder which Bruce LaBruce had been showing in the city’s gay bars, was inflated to 16 mm and started being presented at festivals and in theatres like the Cinema Village in New York, not to mention the weekly Disco 2000 night organised by Michael Alig at the Limelight, the famous mega club held in a disused church in Manhattan. At the same time, the early films of Gus Van Sant (Mala Noche), Todd Haynes (Poison) and Gregg Araki (The Living End) were defining the contours of a New Queer Cinema that was reviving the audacity of 1960s and 70s underground cinema. The success of No Skin Off My Ass in which Bruce LaBruce engages in non-simulated sexual acts with his skinhead protégé, and which was distributed in Europe and Japan, inspired a second full-length feature film, Super 8 ½, a pastiche of Fellini’s 8 ½, and which starred Richard Kern and Vaginal Creme Davis. LaBruce plays a pornographic film director who, on receiving unexpected recognition for his ‘oeuvre’ by the most serious of critics, proceeds to suffer from ‘writers block’. 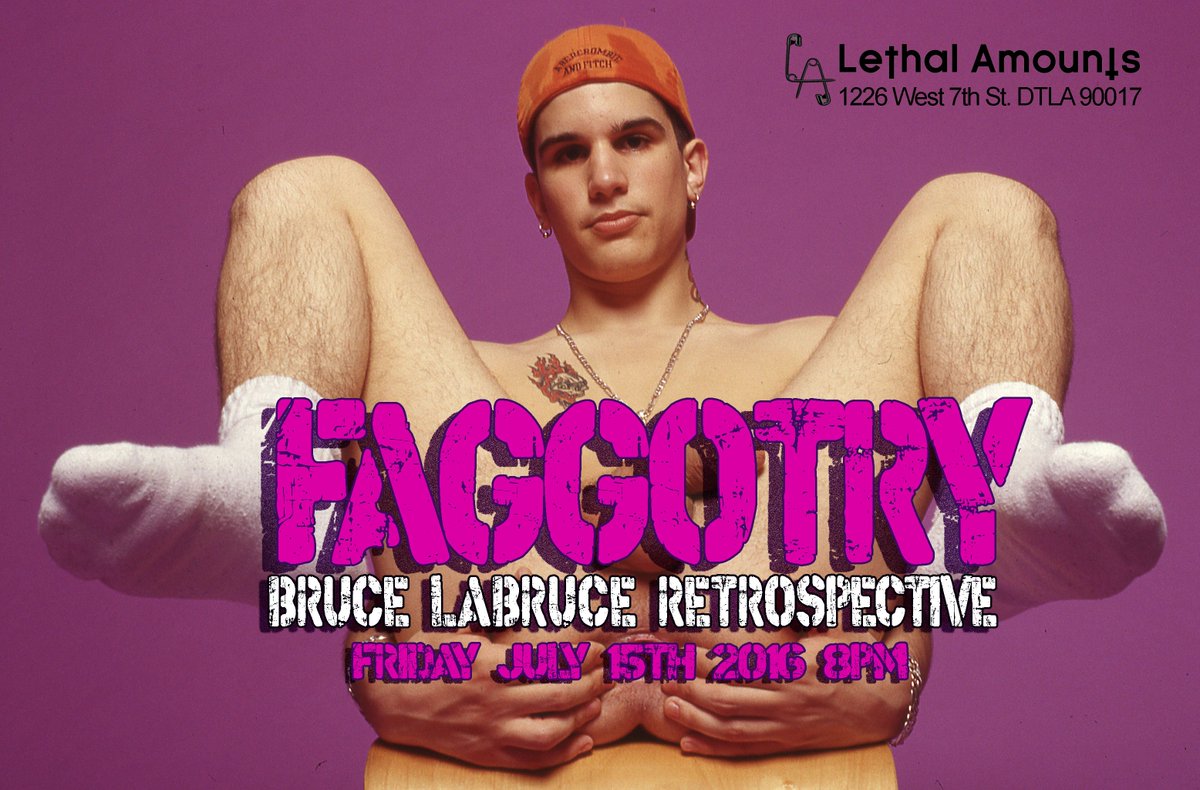 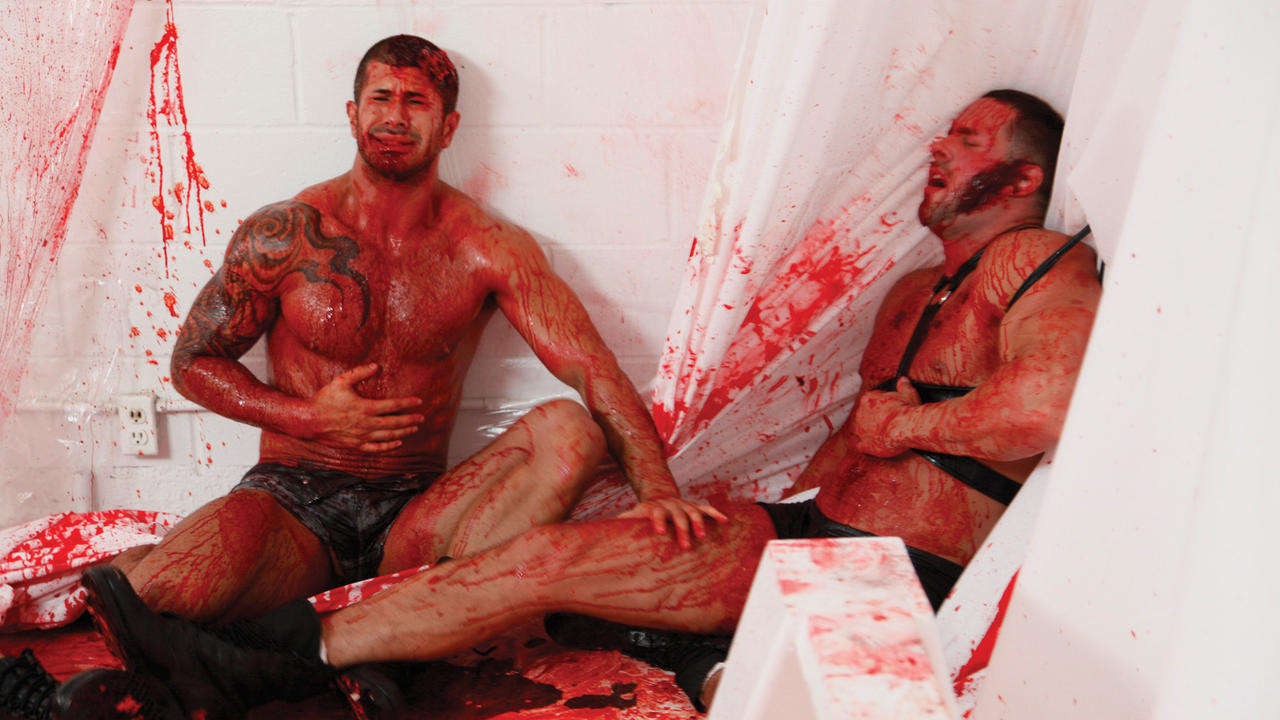