The 5 most improbable film roles of James Franco

Currently starring in and directing the movie “Future World”, the ever-charming James Franco has often chosen comic and off-beat roles over more ambitious auteur projects. Numéro looks back at the 5 most improbable roles of Hollywood’s most out-there actor. 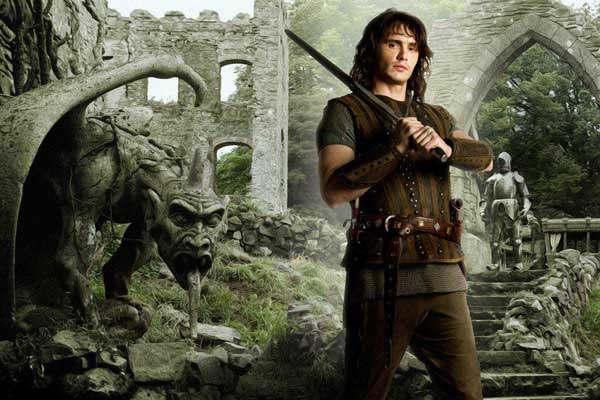 James Franco as Tristan, in “Tristan and Isolde” (2006) by Kevin Reynolds.

1. An executioner of hearts in the series Freaks and Geeks

Before taking on the role of shadowy Harry Osborn, the best friend but also arch nemesis of Peter Parker in the Spider-Man trilogy (2002 – 2007), James Franco lent his angel face to Paul Feig’s American series Freaks and Geeks. Broadcast between 1999 and 2000, the 18-episode show concentrated on little gangs of warring high school kids, with the actor playing Daniel Desario, a charismatic freak, slacker and heart breaker. A series that was both ironic and honest about adolescence but despite good reviews got cancelled because of an erratic broadcast schedule and competing slots. We had to wait another 16 years before seeing James Franco in a TV show again, this time as the protagonist of 11.22.63, based on the eponymous Stephen King novel about the assignation of former American president John F. Kennedy.

2. A halfwit Don Juan in Whatever it Takes

Trailer for the movie “Whatever it Takes” (2000) by David Raynr.

After auditioning some 500 hopefuls, James Franco was finally picked to play the title role of the biopic, James Dean (2001). He got cast thanks to his astonishing physical resemblance to the legendary actor of Rebel without a Cause: the same unruly hair, the same seductive gaze, the same grin hovering at the corner of his mouth… Shown at the Festival of American Cinema in Deauville, the film was a springboard for the actor’s career, which up until then had been stuck with comedies. He was even recompensed for the role at the 2002 Golden Globes. The James Franco phenomena had arrived, a youth idol searching for sex symbols to adore.

4. A Celtic prince charming in Tristan and Isolde

“James Franco seems as disturbed sa Tristan himself”, exclaimed a user on the movie reviewing website Rotten Tomatoes in response to Kevin Reynolds film Tristan and Isolde (2006). A freestyle adaptation for the big screen of the Celtic legend Tristan and Isolde,the work is a historical saga meets Romeo and Juliette. Like a prince charming from the most beautiful of fairy tales, he throws himself entirely into the role of the legendary hero, complete with tousled long hair and a hot body. The Franco storm is unleashed on Hollywood, and the actor boldly ventured into the unknown, having fun playing characters so different from those of his early career, yet still close to his own personality.

Trailer for “Tristan and Isolde” (2006) by Kevin Reynolds.

5. His cameo death in Alien: Convenant

With metal capped teeth, corn rowed hair and Carrera sunglasses, he is barely recognisable in the role of “Alien” the gangster in the trashy film Spring Breakers (2012) by Harmony Korine. But then James Franco isn’t always scrabbling to the top the bill, as proved by his cameo in Alien: Convenant (2017), a direct sequel to Ridley Scott’s Prometheus (2012). Born around the time of the release of the first Alien movie, the actor is a die-hard fan of the saga. Thought to have been given a major role in the science fiction series, he ended up lasting a mere ten minutes before being burnt to death while he’s still in a cryogenically induced slumber.  An indomitable beast, Franco is never where you expect him to be.

The scene where James Franco dies in “Alien: Covenant” (2017) by Ridley Scott.

Recently accoladed at the Gold Globes for The Disaster Artist (2018), which he both acted in and directed, James Franco is currently starring in Future World, a sort of Mad Max, that he directed with the help of Bruce Thierry Chung. In a post-apocalyptic world, he plays a warlord accompanied by a humanoid robot, both on a voyage in desolate lands where they fight a myriad of opponents. Although punier than Mel Gibson and Tom Hardy, James Franco stops at nothing to get what he wants in this science fiction western, his umpteenth challenge in a career as bonkers as it is eclectic.

On general release in American movie theatres since May 24th, Future World will be in French cinemas soon.