The ringmaster of all discarnate music freaks, Marilyn Manson, a tall skeletal tormented soul with a terrifying voice, rocked the ears of a generation of innocent teenagers. This colossus of dark rock, a musician, painter and sculptor, draws from the depths of violence, death, war and sex for inspiration… But the ghostly prince also flirts with the big screen, always where we least expect him. We look back at five improbable roles.

“I put a spell on you” by Marilyn Manson.

The singer’s eccentric get-up already makes him an iconographic curiosity. But a fleeting appearance in David Lynch’s packed gallery of monsters, saw Marilyn Manson embody a porn star in his first movie role. Covered in make-up with towering hair, he stands beside Twiggy Ramirez, in what is more a cameo than anything else. Marilyn Manson blends perfectly into the frightening atmosphere of this dark story that explores the duel personality of Fred Madison, a saxophonist whose jealousy leads him to murder. The film soundtrack features the singer’s major hits as well as his own version of the song I put a spell on you by Screamin’ Jay Hawkins. 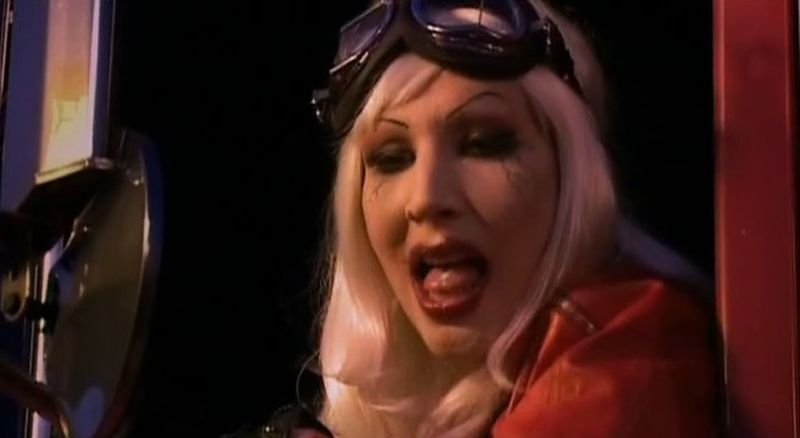 2. A crazy Drag Queen in Party Monster (2003) by Fenton Bailey and Randy Barbato

Christina, a peroxide blond in skin-tight leopard print dress, cigarette clamped between her lips and holes in her teeth… Who would have looked for Marilyn Manson in this crazy film by Fenton Bailey and Randy Barbato, recounting the early days of the Club Kids in New York? But there he is, hiding in this role of trashy drag queen, appearing in increasingly absurd outfits, in a cloud of ecstasy. If it’s difficult to recognise him in his blonde wig and fishnet stockings, his voice resonates in the depths of an empty club, in front of an over-excited Macaulay Culkin. In this truly compositional role, Marilyn Manson shows here that he can really alter his face, beyond a simple change of makeup.

The man who claims to be the Antichrist Superstar and does duets with Johnny Depp obviously attracts film makers as weird as himself. In the delirious movie by Quentin Dupieux, a director known for his dexterity in handling the absurd, Marilyn Manson seems to become the uncomfortable teenager he once was in his youth. Apprehended by a one-eyed musician cop, he embodies the anxiety of a frightening normality in a performance bursting with finesse and emotion. As his first major role, his ‘lost cause’ character goes well with the flayed universe of his music, without his different coloured eyes or make-up, but with all the impudence of his marginality. 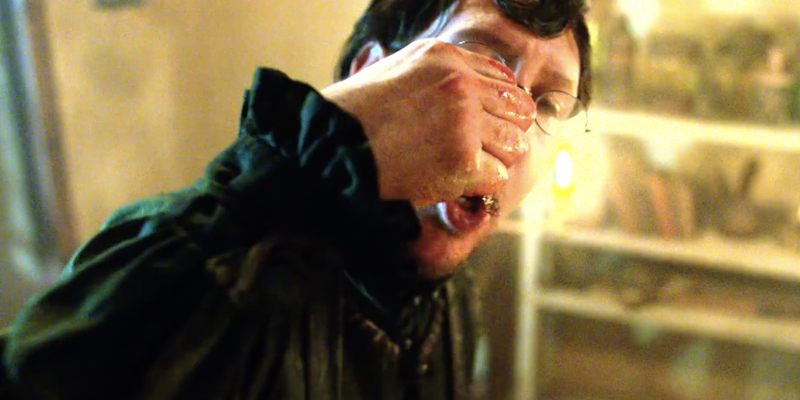 It’s not just with his music that Marilyn Manson provokes fiery reactions from terrified parents and frightened goth teens. Refusing to limit himself to a single artistic milieu, the singer has also made numerous appearances in TV series (Californication, Kenny Powers, Sons of Anarchy). In season 3 of Salem, he is barely recognisable without his make-up as a petrifying barber/surgeon who swallows leeches with relish. Between morbid experiments, he utters these wonderful words as a true devil’s advocate: "Most of us die as we are born, in agony". 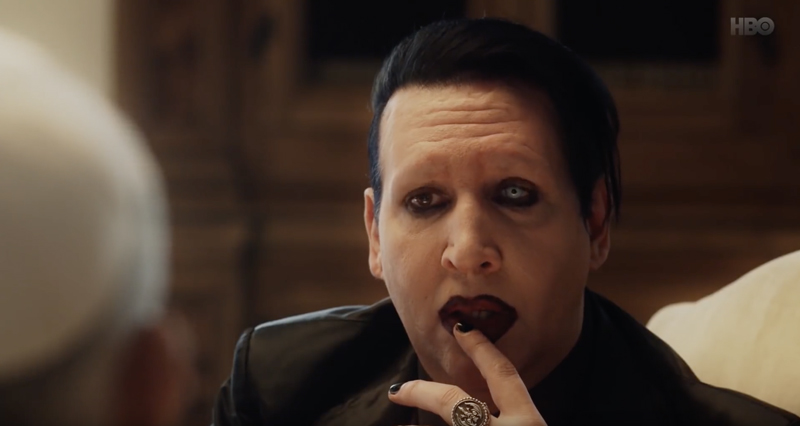 Marilyn Manson in "The new pope" by Paolo Sorrentino

5. Himself in The New Pope 2020 by Paolo Sorrentino

Because we couldn’t talk about Marilyn Manson’s roles without mentioning the one where he plays himself in a collaboration with the sequel series to The Young Pope. The emblematic figure of Satan’s Church is effectively invited to the Vatican in Paolo Sorrentino’s series, for a season that’s hotter than ever. Bewildered and polite, he gives an abstract painting to John Malkovich thinking he’s the former pope. A clash of cultures are on the cards for the latest role embodied by Manson, a man whose version of “Personal Jesus” remains today one of the most beautiful blasphemous hymns in music.