With her first feature, Atlantique, Mati Diop took the notoriously tough jury at the Cannes Film Festival by storm, walking off with the prestigious 2019 Grand Prix. Suddenly propelled into the limelight, the young director, who is part Senegalese, has made a hypnotic movie that daringly mixes fantasy and social commentary. Numéro interviews a talented filmmaker seeking to embody a destiny bigger than her own. 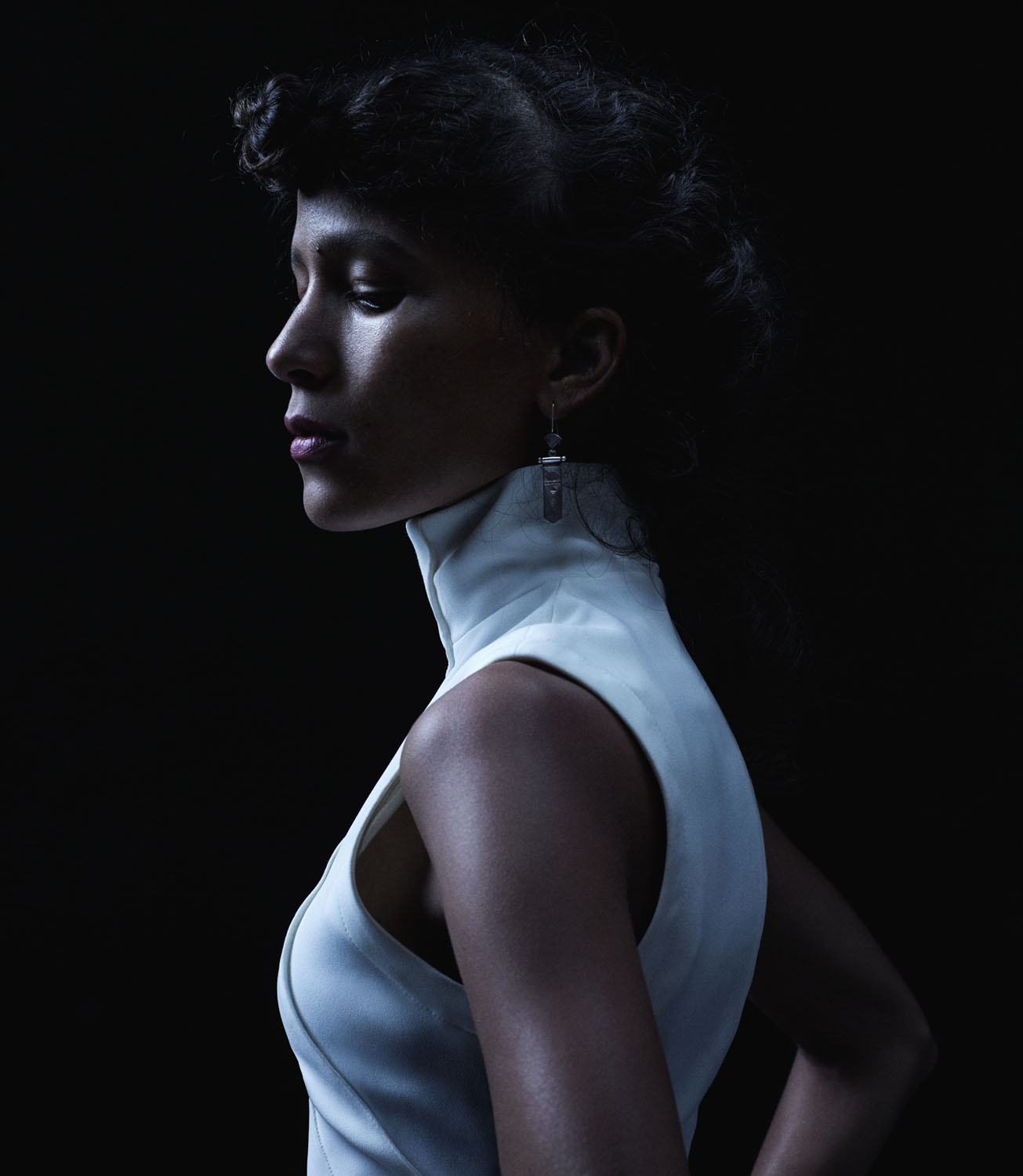 Numéro met up with Mati Diop one summer morning, not far fromwhere she grew up in Paris’s 12th arrondissement. The 37-year-old was finally able to breathe for the first time in months after producing her first feature, Atlantique, which debuted at this year’s Cannes Film Festival. The chaos of screenings and interviews on the Croisette ended in triumph: her very first movie at the festival was awarded the Grand Prix, just behind the unreachable Palme d’or that went to Parasite. Diop’s was a breakthrough that was as swift as it was unexpected, and she’s only slowly coming to terms with it. “I went through a period of extreme shock. It’s going to take some time before I can settle back down, because everything hap- pened so fast, even if it’s positive. Finishing a film is already enor- mously emotional; what happened afterwards was just crazy!” Long silences and hesitations cadence her nonetheless limpid speech, as though she wants to weigh her words and slow down the tempo, enveloping her audience in the same way she does in Atlantique. Set in Dakar (Diop’s father’s birthplace), it tells the story of workers who, when their boss stops paying them, decide to emigrate to Europe; lost at sea, they come back to haunt other bodies, most of them female.

Diop has pulled off the tour de force of making a film that is atonce fantastic and political – it deals with questions of colonization and the never-ending legacy of slavery, as well as the violence of contemporary migrations – and also a hypnotic object, lulled by floating amorous encounters and captivating shots of the ocean. “The political, fantastic and social dimensions are not sepa- rated. From the outset, Atlantique is both a cinematic object and an internal personal journey. The ocean as a character is among the first visions I had: showing this immense mass of water as a living magnetic force that sucks the young down into its depths before spitting them back out again. The fantastic dimension, with the revenants, is inherent in reality as I saw it in Dakar, because the supernatural, the sacred and the invisible are part of Senegalese culture. My own personal sensibility, which is fairly gothic and romantic, encountered that culture. And I often give the elements an important role in my films.” This is filmmaking that is at once consoling and engaged in today’s struggles, as though the zombies represented the most appropriate myths for recounting the world. “In times of crisis, the fantastic is a genre that’s used to touch a political dimension. We’re going through a period of fracture, so it’s hardly surprising. It makes me think of the famous phrase attributed to Antonio Gramsci: ‘The old world is dying, and the new world struggles to be born: now is the time of monsters.’” 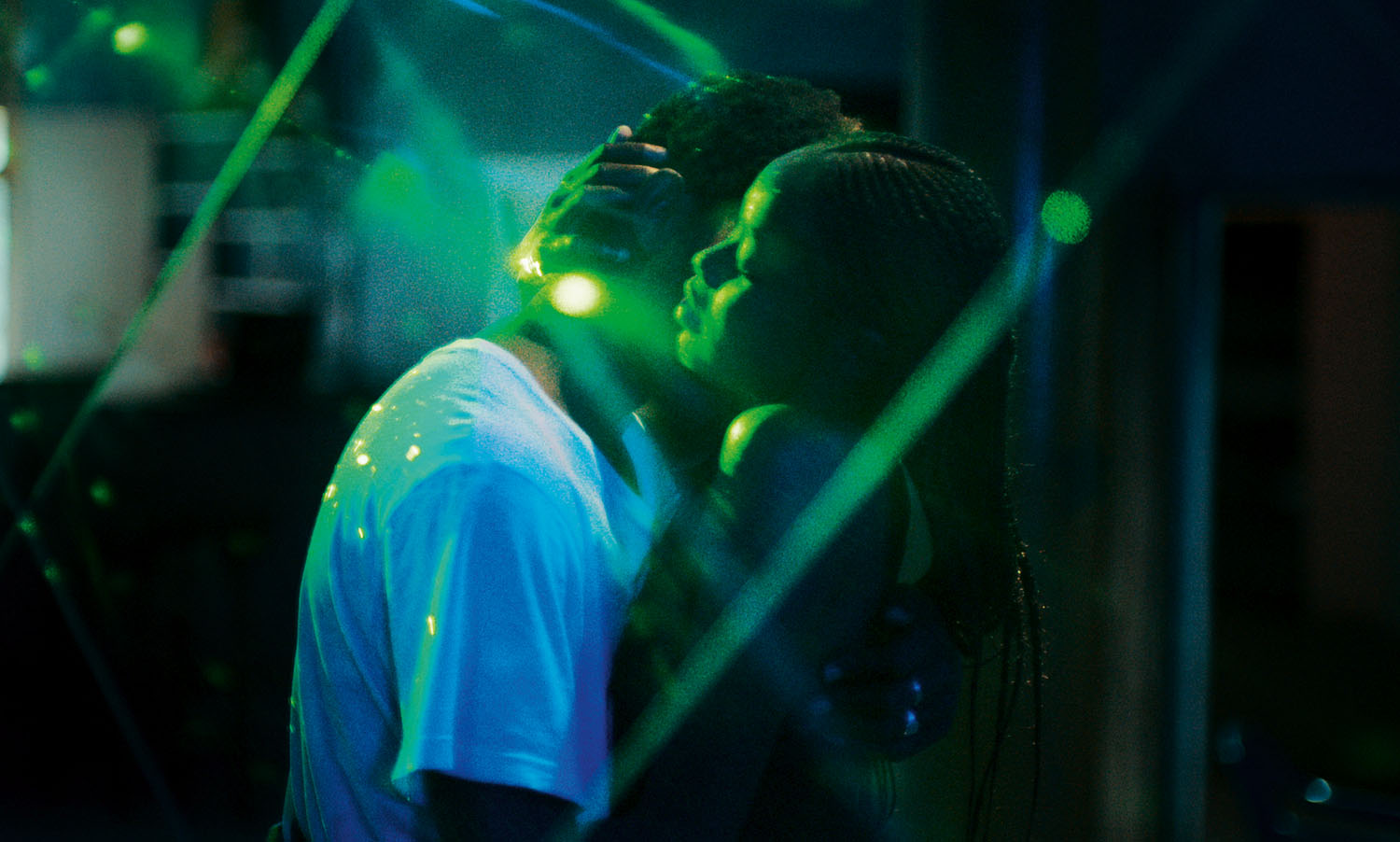 If Atlantique is so compelling, it’s in part because it’s such an outsider, the product of a life that has swung between two continents and two cultures. After her parents’ separation – her father is the Senegalese musician Wasis Diop – Mati’s child- hood was permanently steeped in a creative ambience. She pays special tribute to her mother, who brought her up alone. “Before meeting my father, she already had a very strong relationship with Africa, where she had gone as a photographer. After I was born, she began working in advertising, at a time when it was still a creative industry, in the 80s. As a result I was exposed to a profusion of images and personalities. I grew up with books about photography, and fashion and painting were all around me. The older I get, the more I realize the extent of my mother’s influence. There’s a filiation of independence between us.” Diop also recounts the point to which her experience of life has sometimes been marked by extreme contrasts. “Very early on, I moved in very different social circles and was exposed to social and cultural diversity. My African grandfather was an imam, whereas my maternal grandmother prayed to the Virgin and my father is a Buddhist. Before some of my cousins went to live in the U.S., the Senegalese branch of the family, in Dakar, lived rather modestly, whereas my mother, who earned good money, always took me with her on her travels, which were her passion. I would spend holidays in Martha’s Vineyard and then sud- denly find myself back in Africa among the underprivileged.”

In this jungle of influences and viewpoints, finding her balance was not easy for Diop, especially since, in her family, creativity was primarily “the stuff of autodidacts,” which didn’t help her adapt to classic eductional structures. “I very much wanted to go to Sciences Po after my baccalauréat, but at the same time I had developed what was almost a phobia of classrooms and the teacher-pupil dynamic. I couldn’t see myself spending four more years studying. I wanted to try things out and express myself.” So she began a series of jobs (assistant photographer, waitress), started working in theatre, doing sound and video creation, made a short film, was accepted on a residency at the Palais de Tokyo and then at the Studio national des arts contemporains in Le Fresnoy. At this point, the influence of artworld stars like Dominique Gonzalez-Foerster, Philippe Parreno, Pierre Huyghe and Ange Leccia (“The first person who saw my work and believed in me”) made itself felt. But at 25, Diop became conscious of her differences. “I understood that contemporary art could not be my playing field because it was too closed, too elitist. I didn’t get who it was I was addressing. At gallery openings, I didn’t understand what was at stake. I began to see that the popular side to cinema was important to me, and in consequence its political dimension. What are we talking about? Who are we talking to? For whom are we doing this?”

In order to make her crossover, Diop needed an observer whocould reveal her to herself. And she found that person in the filmmaker Claire Denis, who cast her in 35 Rhums (2008) and in doing so set off a double revelation. “It was an experience that initiated me into the work of an actor, and I liked it, enough to still want to do it today. I also came out of the experience knowing that I wanted to direct. The other aspect was very intimate. The fact of playing Joséphine, the daughter of a black man, awoke me to a part of me that had been crushed by my white culture and the Paris arts scene I frequented. While perfectly conscious of colonial heritage and all its complexity, I was myself a little alienated. I had a link with my African origins, which I’d been lucky enough to be introduced to as a child, but at the same time, when I was making the film with Claire Denis, I no longer saw or thought of myself as half black, but as almost completely white. I relaxed my hair, but had a critical attitude towards black women who did that or who whitened their skin. I didn’t even realize! I told myself a story that it wasn’t very practical for me to have curly hair... It’s crazy to say it, but in a certain way seeing myself next to Alex Descas in 35 Rhums was as though I was confronted for the first time with the fact that I’m black.”

For Diop, it’s a question of exploring private and collective frontiers and envisaging her responsibility as the first black women selected in 72 editions of the Cannes Film Festival.

At the same time came the tenth anniversary of the death of her uncle, the respected Senegalese film-maker Djibril Diop Mambéty, which propelled her into a powerful “introspective tipping point.” “When he died, I was 14. I hung around at Châtelet-Les Halles, I was living my ordinary teenage life, we’d never talked about film in our conversations. But ten years later, I had an awakening.” Diop began a daring project: a film documentary on the subject of one of her uncle’s masterpieces, Touki Bouki (1973), resulting first in the short Atlantiques (2009), and afterwards in Mille Soleils (2013), an elegiac mid-length film that set the young Diop firmly among the up- coming directorial talents. “I felt the need to return to Dakar and use cinema as a tool for reappropriating my black origins. I wanted to retrace the thread of my own history, which I didn’t know at all well in the end.”

Atlantique is the latest part of this quest – the quest of a lifetime – using different means and with different ambitions, and with a certain maturity too. For Diop, it’s a question of exploring private and collective frontiers and envisaging her responsibility as the first black women selected in 72 editions of the Cannes Film Festival. When the list was first announced by Thierry Frémaux, Diop might have thought her inclusion was in part due to the colour of her skin. But such doubts are now gone, so much does the film speak for itself. But it wasn’t easy for Diop to embody this sort of symbol. “My decision to shoot my first feature film in Dakar in the Wolof language was political, a sort of rupture. At the beginning, for my first movie, I was going to adapt a Norwegian novel set in the Alps. I was on the point of starting the development phase when I realized that I had no right to do this, that the world didn’t need an umpteenth film about two blond teenagers in the snow. I had something much more particular and political to incarnate. I’ve requisitioned what I really want to defend and bring to cinema, the story that I, Mati Diop, can tell and that no one else can tell in my place. I sometimes like to fool myself that I’m going to make a light romantic comedy in Paris about my daily life with my girlfriends, which is essentially my real life. But I feel I’m on a mission, even if there’s something rather ponderous in this term. Growing up I was always conscious of the under representation of blacks in film. I wasn’t blind to it – on the contrary, it perturbed and bothered me.” In calming this distress by making wonderfully vivifying films, it’s clear that Mati Diop has found her vocation.