In 2017, a report by the American channel Vice turned its cameras on an alarming project where tattoo artists offer to cover the bodies of volunteers, hungry for thrills, entirely with black ink, as part of a free session. The experience is very much about the actual pain inflicted by the needle rather than the final aesthetic result ... Numéro explores this macabre project, sensitive souls should look away now. 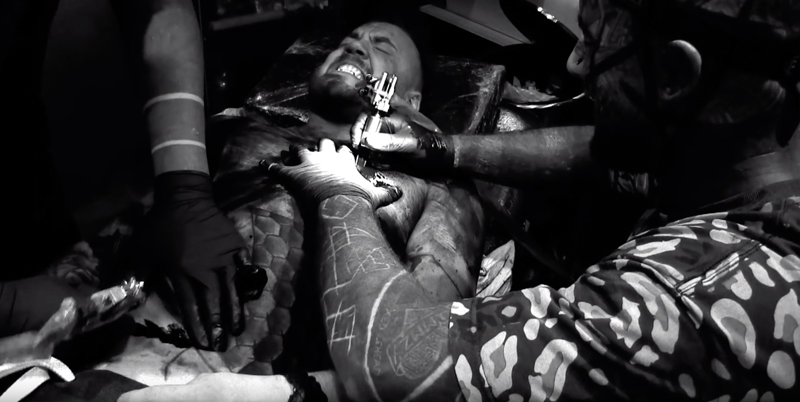 “What if a tattoo was first of all a noise? The sound of a needle sinking into the skin, the skin crying out? Because the noises are there: the electrical crackling of the device, the silent flow of warm blood, the muted sound of the sponge absorbing the blood, the indistinct cry of the skin when the needle enters the flesh,” writes Vincent Estellon in his book Tatouage sur corps ou envers de l’expression *. In the tattoo parlour chair, it is indeed the endless cry of a taught body, undergoing the fierce incision of ink-drenched needles, which is stifled by a tenacious will to deal with the pain. The bulging eyes of the (self) mutilated man weep over this black ink that eats into his skin raw. Bilious blood oozes from markings which wickedly striate over his chest. The body seems to forcefully vomit out this ink that’s trying by any means to make its mark, but the man resists, because this is the challenge he has chosen to undertake.

1. The tattoo as means of surpassing oneself

The people behind the Brutal Black Tattoo Project are Cammy Stewart, Valerio Cancellier and Phillip 3Kreuze. Three artists specialising in blackwork tattoos (large-scale, all black tattooing). A Scotsman, an Italian and a German, united by the same mantra "no pain no gain" and their unprecedented tattooing is portrayed in the Vice documentary as sessions of veritable torture. However, behind this satanic trio and their apparent sadism lies a very real desire to offer a unique experience in total opposition to contemporary tattooing practices where pain must be minimised. Here, tattooing is seen first and foremost as a gruelling process, resulting in a black mass over the entire body from head to toe, covering the face, the arms and the hands. Some see it as social suicide. Others as a way of finally achieving the ideal image they have of themselves.

“The people who take part in this project have established a sort of companionship with pain,”explains sociologist David Le Breton. In his book Expérience de la douleur, entre destruction et renaissance (2010), he explains how it’s imperative to distinguish "pain" from "suffering". One is essentially physical while the other remains subjective and concerns the soul and the spirit. Thus illness and death can be the prerogative of true mental suffering, but the pain of voluntary tattooing has a constructive dimension. We shouldn’t forget that those taking part in the Brutal Black Tattoo Project are indeed “consenting victims”. By submitting to the good will of the needles, they’re accepting that their bodies will be abused for hours and will look completely different at the end. Because the shape of the tattoo is a mere detail. Covered with thick lines, the bodies radically change in appearance during the sessions, the face is swathed in a black mask as the spirit becomes more reckless. 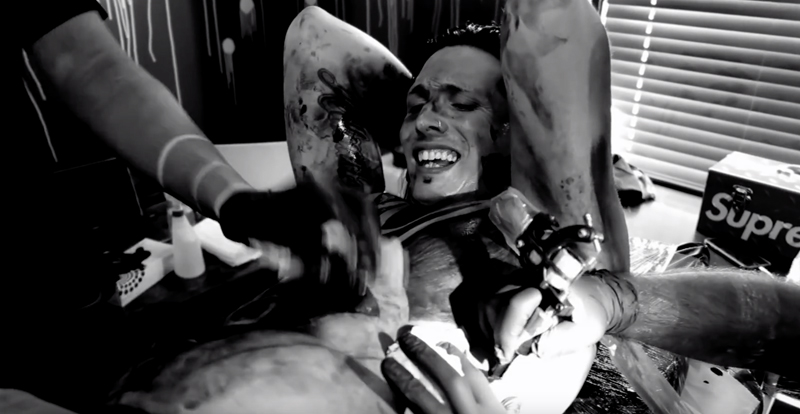 Similar to the traditional rituals of tattooing and scarification practiced in certain parts of the world, the Brutal Black Tattoo Project wants to break away from mainstream tattooing, which is essentially all about aesthetics, mandalas, pretty flowers and birds in flight. A true rite of passage, it makes pain an end in itself. Inflicted and received in order to push the limits of the body and mind, pain is seen as an effective means of going beyond oneself. While we’ll never know exactly what pushes the participants to take part in such a project, we can only guess that they’re seeking to get rid of one identity in exchange for a form of excellence. More than just a tattoo, it is an essence, an improved identity that they’ve acquired through this extraordinary strength of character.

“If you don’t feel pain, you’re not alive.” With ink on their eyes, fingers and forehead, participants in the Brutal Black Tattoo Project, mainly men, have their own vision of the world. Already massively tattooed, they want to fill in the blank spaces, or cover up the tattoos that no longer suit them. Some are tattoo artists themselves and are thus used to the needlework, others simply have something to prove to themselves. With this test of pain as an embodiment of manhood, the embellishment obtained at the end is all the more satisfactory. While these tattoos reflect a sort of marginalisation, they are also the gateway to a community where physical suffering is synonymous with great mental strength. As if returned from the dead, they have separated themselves from ordinary folk - for whom pain is the enemy to be avoided at all costs -, and they display the stigmata of their transformation for all to see. 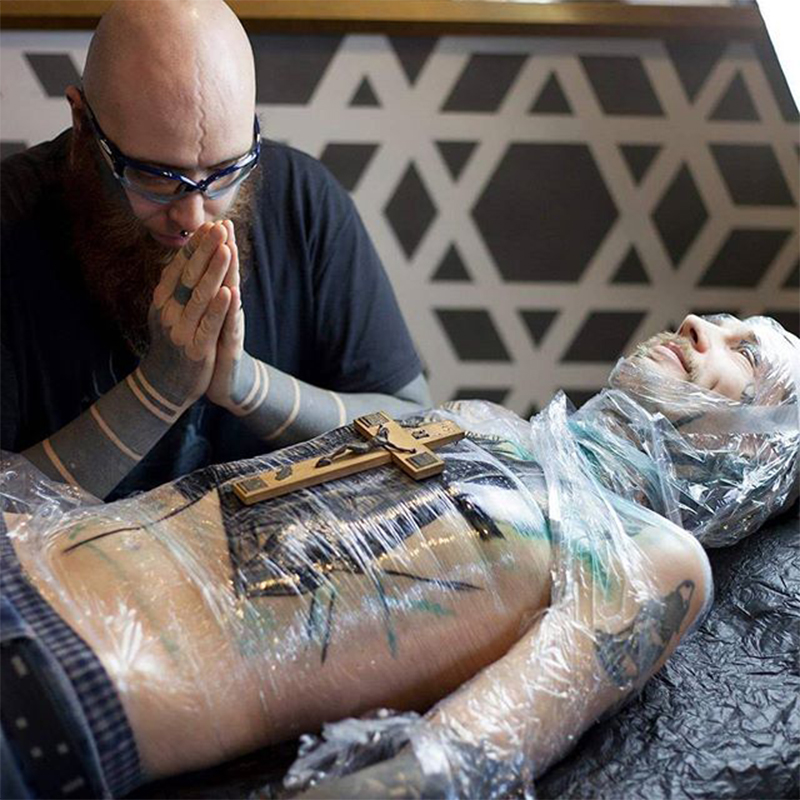 While we might question the merits of such an initiation, the Brutal Black Tattoo Project stands out in a world where tradition no longer hold much sway over individuals. The tattoo itself, which in its beginnings had powerful connotations and a sense of belonging, has been democratised to the extent that any average American now sports a traditional Japanese tattoo without knowing what it means. Since neither God, nor the family, nor the homeland constitute true indefectible landmarks in our democratic societies, individuals are frantically looking for a framework to cling on to. In this sense, inflicting extreme pain on yourself by radically transforming your body, illustrates just as radically, the need to join a collective.

Sociologist David Le Breton also explains that there’s been an increase in traditional tattoos around the world. At the international fairs, it comes as no surprise then that tattoo artists are using ancestral tools and techniques to craft their artworks. During the 9th World Tattoo Fair at La Villette in Paris (2019), artists such as Ajarn Matthieu and Ajarn Rung tattooed numerous customers using ancestral Thai techniques, employing a sort of small hammer dipped in ink. Even though it takes much longer and is more painful, this kind of process is not considered as extreme but more as honorary, as it pays tribute to the traditions and know-how of the ancient ones. While the Brutal Black Tattoo Project is not a direct reference to any traditional practice, it does suggest a step back. The tattoo is no longer harmless, it has to be deserved with the cost of real effort. Afterall, no pain no gain.