As dystopias continue to flourish over the small screen, imagine a dark future eroded by new technologies, a software creating terror on the internet. Well, it’s already here… Deepfake allows for the replacement of one face with another so that now anyone can say anything. From pornography to politics, this fascinating innovation is leading web users to make their wildest fantasies come true, all while manipulating the crowds… 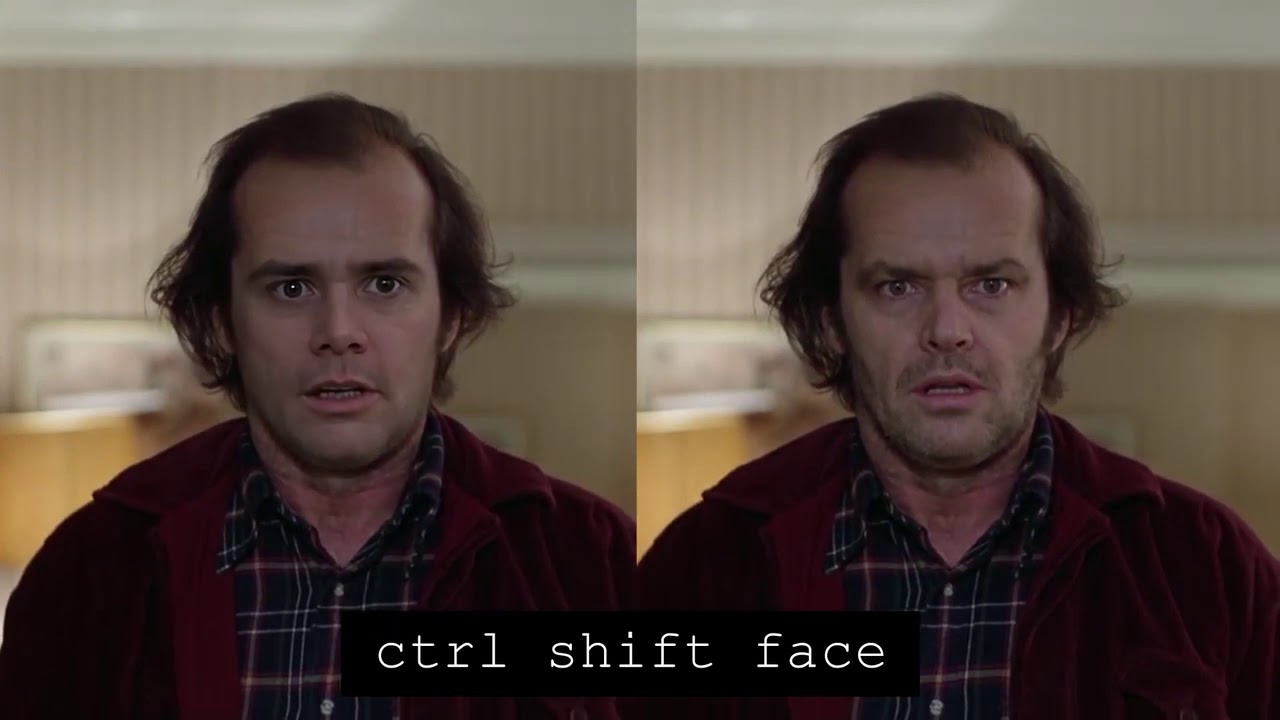 July 2019. In a video published on social media, Jim Carrey plays Jack Torrance, the irascible and terrifying character in Stanley Kubrick’s Shining. Wearing a purple Harrington jacket, he imitates Jack Nicholson – the original performer – by copying every one of his expressions with an astounding mimicry, from his demonic grin to those distorted eyebrows. The comments section below the video is full of praise: Jim Carrey was voted “best actor in the history of cinema” by a handful of internet users lost in the meanderings of Facebook. An unofficial honorary title… particularly because the extract is incomplete. The original publication on a split screen - on the left, Jim Carrey’s interpretation, on the right Jack Nicholson’s - presents the two perfectly synchronised scenes struck through with the words "special effects".

This sleight of hand is the work of Ctrl Shift Face, the YouTube channel that’s mastered the art of deepfake, an ultra-realistic fraud that consists of replacing one face with another using a powerful software. Since they first appeared in 2016, these clumsy subterfuges have continued to proliferate, becoming increasingly realistic. Humorous experiences veering towards a scam, tricking the less attentive. At a time when we tweet like we breathe, without stopping to analyse the facts, broadcasting “reactions” on the web rather than real thoughts, deepfake is a boon for hoaxers quick to take advantage of the credulity of net users.

2. A process straight out of the movies.

Behind the Ctrl Shift Face alias hides a 30-something Slovakian who shares the same distrust of fake news as Donald Trump. In just one week’s work, this special effects specialist can fool anyone with his deepfakes. A feat not everyone is capable of: “It’s easy to make a bad deepfake, but very hard to do one that really works”, says the geek columnist in le Monde newspaper. “You need a very powerful machine, time, patience, but above skills.” Before this, Ctrl Shift Face used to scan people and duplicate their digital silhouette for the movies. A technology we’ve already seen in action at Universal studios when they featured the actor Paul Walker in a scene from the Fast and Furious franchise (2015), a few months after his death in a car accident.

Digital trompe-l'oeil is a juicy market, and California's visual effects company Digital Domain knows this. Using an ultra-precise digitisation system and hundreds of LED lamps arranged in a sphere, it has already reproduced the faces of around sixty celebrities who, for almost a million dollars, will be able to pursue their film careers long after their death ... But the deepfake software doesn’t need any appointments to scan faces and juxtapose them onto others.

Arnold Schwarzenegger in “No country for old men”.

3. A free technique available on the internet.

Anyone can create a mediocre deepfake. Just as anyone can falsify a photograph or spread fake information on the internet. For deepfaking, all you need is a computer with a graphics card that’s powerful enough to run the appropriate software (DeepFaceLab), which is freely accessible on the web. By providing two different videos with close-up film scenes, this artificial intelligence will generate hundreds of images by recording the first character's facial expressions and lip movements. These are then duplicated onto the face of the second person. Now anyone can make a speech facing the camera, and become one with their favourite actor. For the deepfake to create a really successful illusion, a few additional steps are necessary. Perfectionists even use apps like Voices to imitate the vocal timbre of a celebrity.

While some are thrilled to welcome this technological feat, deepfake remains a disturbing creation. It’s all the more sinister as disinformation reigns and the media, faced with rapidly diminishing readership, has fully integrated the distribution of online content into their mode of operation. What was originally a humorous exercise in 2016 – the American presenter Jimmy Fallon turned into Donald Trump to telephone Barack Obama in a successful deepfake – has today become an instrument conducive to crowd manipulation. Starting with politics, where false statements posted on the net potentially harm candidates and influence electorates. Then, in the corporate world: in 2019, as part of their installation Sheffield Doc Fest, the artists Bill Posters and Daniel Howe produced a deepfake which saw Facebook founder Mark Zuckerberg say: “Imagine this for a second: One man, with total control of billions of people's stolen data, all their secrets, their lives, their future... ” It should be noted that 90% of the deepfakes generated are connected to sex and pornography. A sizeable anxiety when a simple fantasy acted out in private could lead to the online distribution of fake sex-tapes. The age of digital propaganda has well and truly begun...