Who is the actress and activist Jennifer Lawrence ?

An Oscar winner at the precocious age of 23, and an actress who incarnates her times, Jennifer Lawrence intelligently alternates blockbusters and films d’auteur, all the while defending her political convictions, such as her support for the movement #Timesup. This autumn she dazzles in a film directed by Francis Lawrence (of Hunger Games fame) to accompany Dior’s new fragrance Joy, of which she is the official face. 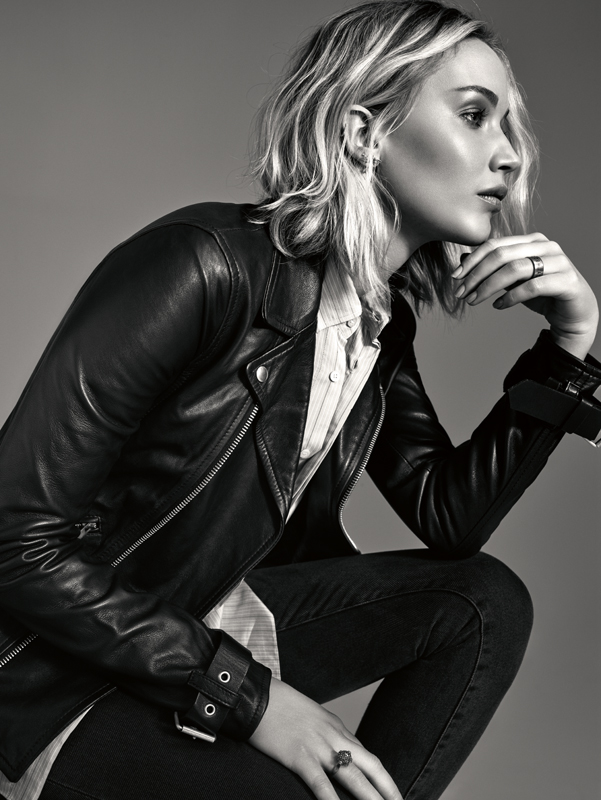 The first time I met Jennifer Lawrence, in London at the beginning of the 2010s, she’d just been nominated for the first time for an Oscar, for her role in Debra Granik’s indie hit Winter’s Bone, in the best actress category. She was 20 and had fire in her eyes. It wouldn’t be until three years later that she finally won the statuette, in David O. Russell’s Happiness Therapy, a deep and stylish romantic comedy in which she starred opposite Bradley Cooper. But already, in this luxury London hotel overrun by a horde of ordinarily blasé journalists, you could feel a sort of tension in the air, as if those present had the vague feeling that they were meeting something other than just the sensation of the year, in actual fact an actress who was destined for a career that would be quite out of the ordinary. She was funny, intelligent, moving, a little bit reserved, but sure of her worth.

Eight years later, Lawrence has more than fulfilled those expectations. With four Oscar nominations to her credit, she has become the youngest woman to be nominated that many times in the best actress category. For several years now she has been the most highly paid actress in Hollywood, according to Forbes magazine, and her films have made over $5 billion worldwide. That’s what’s called mastering your domain and ruling supreme. Something that no actress has managed for such a protracted period since Julia Roberts.

She imposed her own tempo on each film by effortlessly promulgating her way of being, striking home every time with her intensity and her ability to play youth enlivened with just a dash of ageless wisdom.

Like the star of Pretty Woman, Lawrence has something of that all-American magic found in girls who hail from neither the city nor the coasts, but who grew up in the sunshine of the prairies. Lawrence was born in Kentucky, land of bluegrass and cheerleaders – and, indeed, she was a member of a cheerleading squad in high school. While she has never set out to deny her origins on the border of the Midwest and the Deep South, she knew early on, for ambition’s sake, that she’d have to leave her homeland pretty quickly. And at just 14, while on holiday in New York, she was spotted in the street by a talent scout who set her up with potential agents. So began a period in which Lawrence did everything to maximize her chances, to the point of giving up on regular schooling. She also adamantly refused to work as a model. So what was it that drove her? A desire, she has explained in interviews, to reconnect with childhood sensations. She recalls that when she was a kid, acting in front of her family or in school plays was a way of banishing anxiety and getting back her self confidence. And it’s perhaps that which makes her so engaging today – this unchanging joy in acting, her simple and natural way of transforming every set she finds herself on into a place of freedom.

"There are several women I consider role models. Professionally, I was lucky enough to work with Jodie Foster when I was about 18. She gave me valuable advice on life as well as my career. She’s smart and solid with her feet on the ground. Jodie was a real role model for me."

The challenge was not easy. Early on, Lawrence began, with the suppleness of a cat, to alternate indie productions and blockbusters until she was capable of just about anything. All without disorienting her fans – a rare talent. In 2011, Matthew Vaughn’s X-Men: First Class made her a global star in the role of Mystique, a mutant who can change form and appearance – the perfect metaphor for an actress. The Hunger Games tetralogy, in which she played Katniss Everdeen, a rebellious teenager, proved she was capable

of the leading-lady role in a movie franchise whose financial stakes were colossal. These films also charted Lawrence’s progress towards the summits, showing a young woman who was ever more sure of herself and of her choices. But at the same time one could find her being directed by Jodie Foster in The Beaver, starring in one of the only contemporary romantic comedies that can truly be taken seriously – Happiness Therapy –, and playing the heroine in a black-comedy crime movie set in the 70s which became an immediate classic, American Hustle. On each occasion, Lawrence  was herself; better yet, she imposed her own tempo on each film by effortlessly promulgating her way of being, striking home every time with her intensity and her ability to play youth enlivened with just a dash of ageless wisdom. 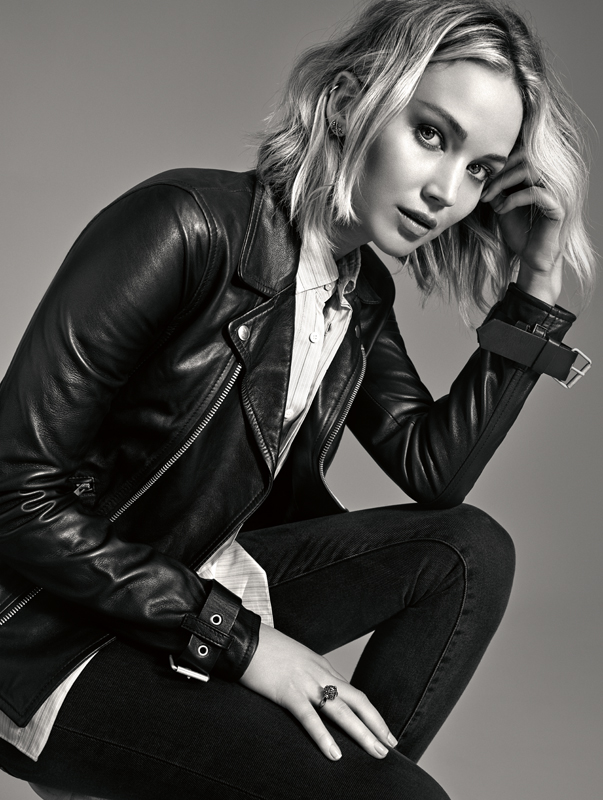 For this reason, describing Lawrence as a “young actress” doesn’t make much sense, and probably never did. As a result, her subsequent career has been just as exciting as her beginnings. In the short directed by Francis Lawrence (no relation) to accompany the global release of Dior’s perfume Joy – of which Jennifer is the face – she radiates, in just a few leg movements in a Beverly Hills pool, an aura of eternal Hollywood glamour; she’s a woman of 2018 who could have been a star in just about any era, an incarnation of the contemporary who is never hindered by the present. “Francis and I have been working together for many years, notably on Hunger Games and Red Sparrow. Because he knows me very well, he was able to incorporate several aspects of my personality into the film. We tried more to catch emotions than to tell a linear story. It was as fun as it was exciting to work together in this way, in what was an entirely new approach for us.”

“I’m devoting time to RepresentUs, which I’ve joined, and whose goal is to encourage people to get involved in politics. RepresentUs is the biggest anticorruption campaign in the U.S."

Over the past few years, Lawrence has changed, and not only because life has made of her the most desirable actress of her times. Eager to rest, she has taken more time to reflect on her commitments, one of which is feminism, a nobrainer in the context of #TimesUp, which she publicly supported in early 2018. “I see myself as a strong woman who holds the reins of her life. There are several women I consider role models. Professionally, I was lucky enough to work with Jodie Foster when I was about 18. She gave me valuable advice on life as well as my career. She’s smart and solid with her feet on the ground. Jodie was a real role model for me. And of course there were my friends, my mother and my family.” Lawrence likes the simple life (“What makes me happy? My dog Pippi, my friends and reading”), but there is a constant openness in her to passion; her favourite book, she says, is Tolstoy’s tragic novel Anna Karenina, certain chapters of which she’s “read again and again…”

Since Donald Trump’s election as president of the USA, Lawrence has developed a taste for urgent political activism via a bipartisan organization which is fighting for an overhaul of American democracy: “I’m devoting time to RepresentUs, which I’ve joined, and whose goal is to encourage people to get involved in politics. RepresentUs is the biggest anticorruption campaign in the U.S. acting at a local level, and it unites conservatives, progressives and all those in between. Our goal is to repair the American political system which today is broken by corruption. We circumvent Congress by getting anticorruption laws passed at state and city level. These laws protect our communities and help create a dynamic for future national reform.” So, before the release of the next episode of X-Men, in February 2019, Lawrence clearly has her work cut out in realms beyond those of the sound stage and the studio. But Planet Cinema is still waiting for her, and her alone.