The 32-year old English designer, and winner of the 2016 and 2017 British Menswear Designer of the Year award, was guest of honour at Pitti Uomo in Florence. Numéro looks back at the journey taken by this master of visual effects, adored by the Anglo-Saxon press. 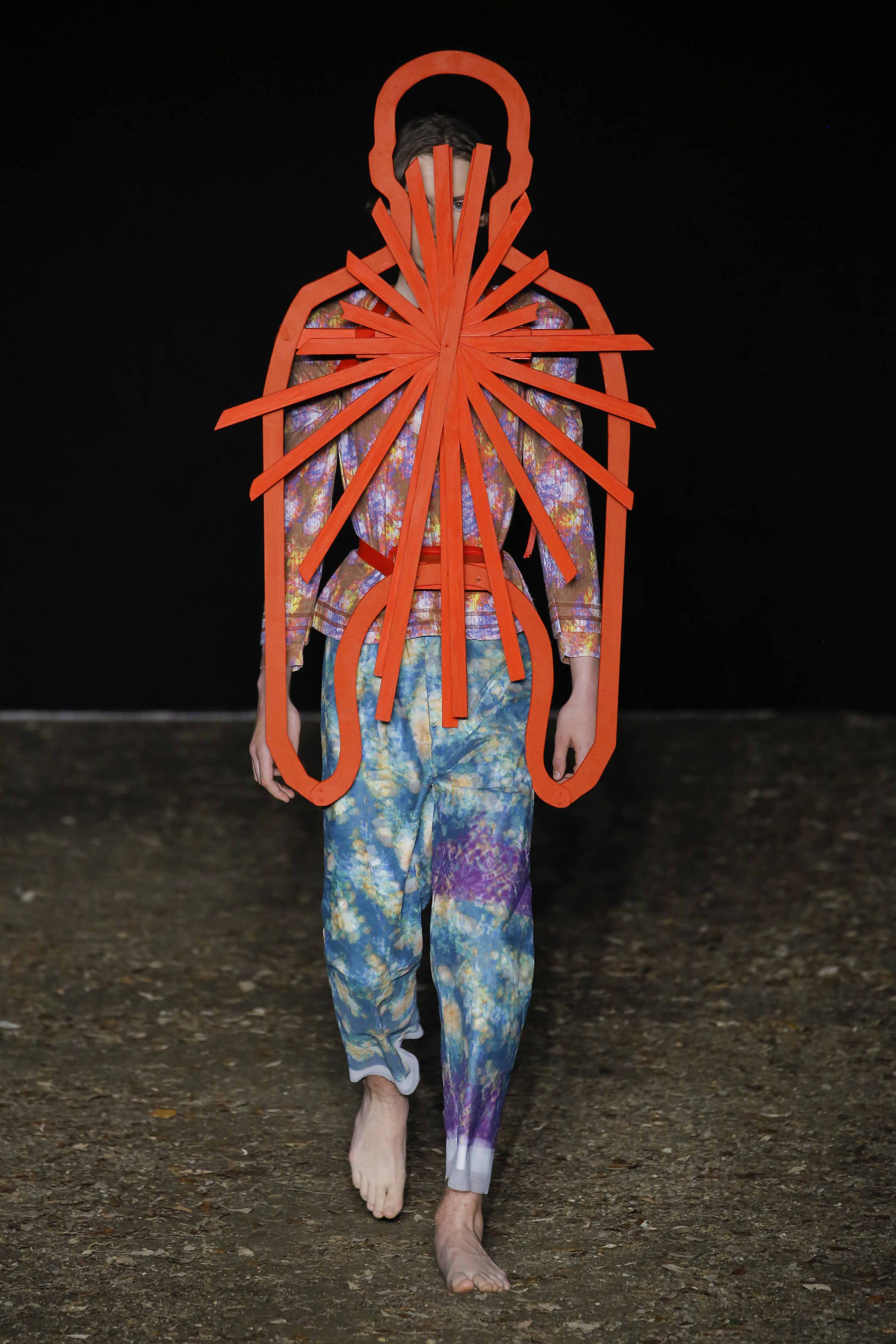 “The designer revolutionising the masculine silhouette” (CNN, April 2018), “the designer who’s changing how men get dressed” (The Guardian, June 2018) … Quick to embrace the slightest creative spark, the Anglo-Saxon press isn’t ready to stop heaping praise on its new darling: Craig Green, 32. His is a highly esteemed success coupled with a generous presence in stores: Dover Street Market, Barneys, SSENSE, Selfridges, Matches Fashion… But it was in Italy the designer truly confirmed his new empirical status. As guest of honour at Pitti Uomo, the Florentine high mass of men’s fashion, the British designer presented his spring-summer 2019 collection on June 14th there.

His great quality: playing on two sides, casual and experiemental, conceptual and visual.

Effortlessly, Craig Green rolled out all the recipes of his success: a clever balance between experimentation and casual pieces with obvious commercial efficiency, skilfully reworked artistic references, and a conceptional edge embodied both visually and by his slightly metaphysical, slightly sociological discourse. One of the great qualities of the designer lies in his ability to play on two sides, casual and experimental, conceptual and visual. 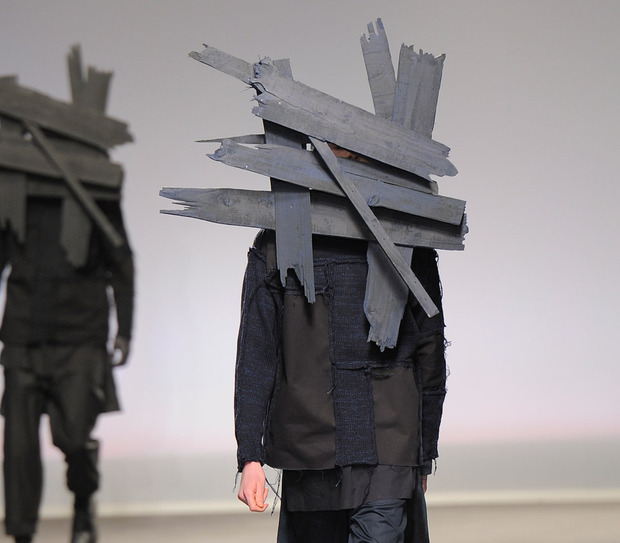 In Florence, the tableau seemed so classic. By choosing the sublime Giardino Di Boboli as backdrop for his show, Craig Green played the bucolic romanticism card. The garden created in the 16th century for the Medici family is home to a collection of sculptures that form their own hypnotic parade. The other tableau was of course, the British designer’s retro-futurist creations, presented at night, between century-old trees. What effect did the clash of these two tableaux have? A strange, unreal beauty, a fascinating and somewhat frightening anachronism that could be home to characters from THX 1138 or Logan’s Run, two cult sci-fi films of the 70s, muscling in on the Renaissance.

For fall-winter 2013 Craig Green had his models walk the runway covered with wooden sculptures. It reminds us of Kawamata.

From the beginning, Craig Green has understood how to impose his language and create visual tableaux, literally as well as figuratively. For fall-winter 2013, he had his models walk the runway covered with portable wooden sculptures. These dismembered tables replaced the heads of each model and remind us of Japanese artist Tadashi Kawamata’s wooden huts. The Daily Mail couldn’t help but mock with the title: “No one wants to dress like that, what a plank.” But just like Rei Kawakubo, the queen of unconventional fashion, the show is only ever an experimental laboratory.

Also like Rei Kawakubo, Craig Green’s clothing accumulates layers. The volumes are drawn like planes that pile up. A method he neglected this season in favour of more simplistic cuts. The designer is not known for bending to the constraints of men’s fashion that should be wearable and conservative even (it’s well known that men like nothing more than classic suits). Thankfully this is 2018 and men are more liberated these days. 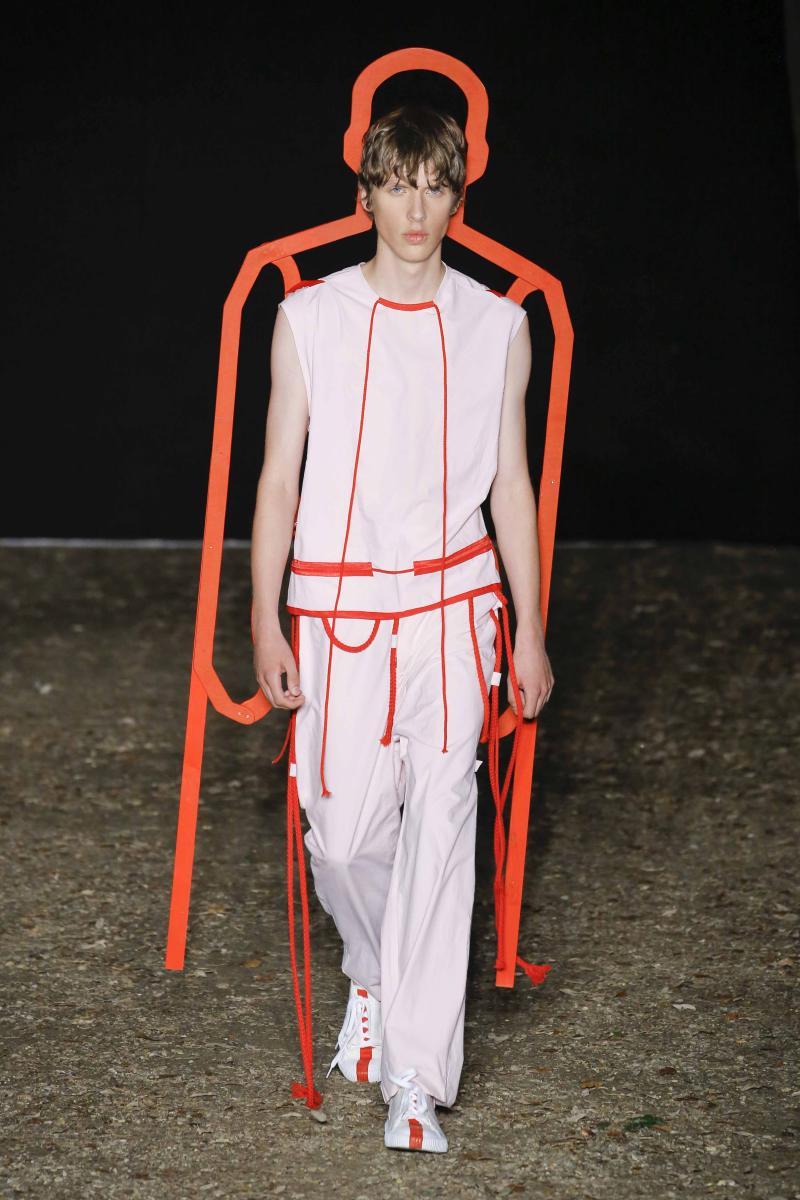 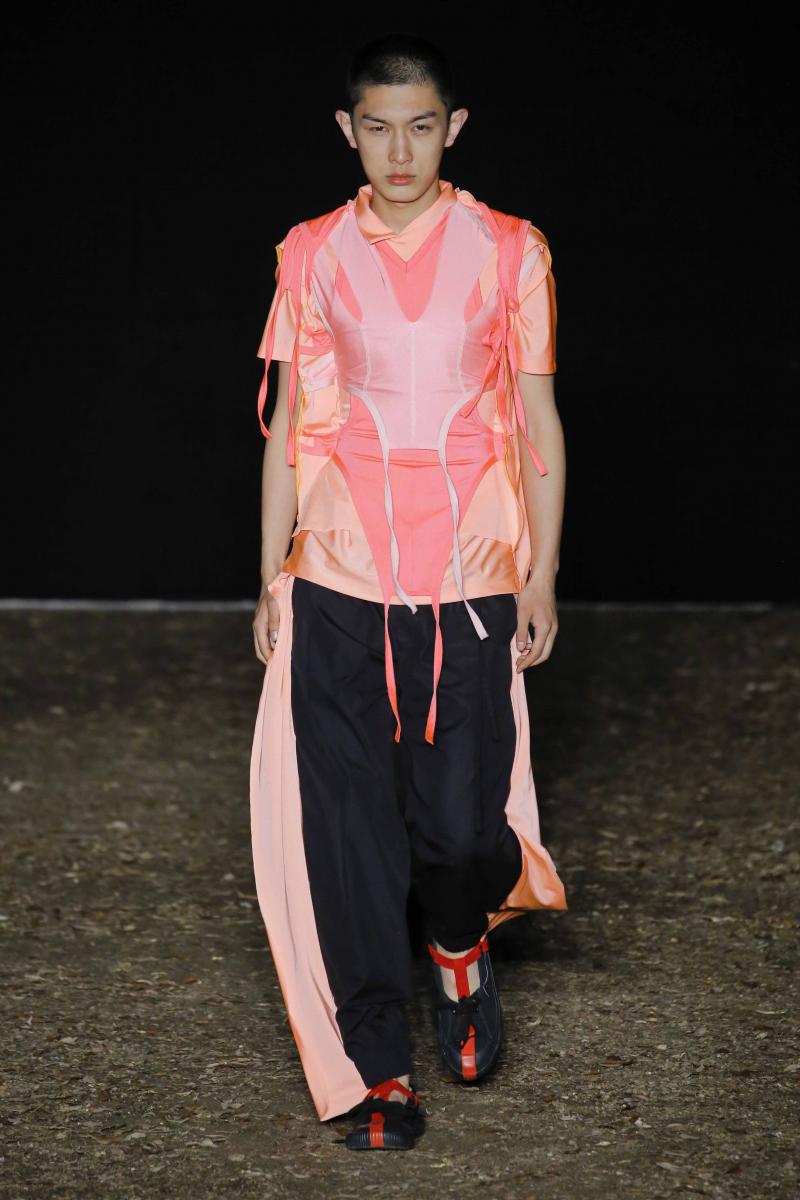 Show after show, the Craig Green grammar has established itself: the use of ropes – very present in the first looks of this Florentine show – flag-veils, sculpture-structures worn by the models… and a certain (paradoxical) obsession with uniform. Because indeed it’s his garments inspired by the police, doctors and workmen - conventional wear par excellence - that are selling like hot cakes, along with parkas and kimono-style coats… In this era of “at the same time”, the young man knows he has to align radical with commercial, with one nourishing the other. The launch of his CORE line, a selection of the “bestsellers and pieces we like wearing to the studio every day”, is proof enough.

“I’m very interested in the way the cubist artists represented different points of view of a same object on a two-dimensional flat plane (the canvas). As if that object was being seen from different perspectives at the same time.” Craig Green

In terms of artistic and conceptual references, the designer is just as impressive. At the end of his Florentine show, Craig Green willingly offered a deciphering exercise: “I’m very interested in the way the cubist artists represented different points of view of a same object on a two-dimensional flat plane (the canvas). As if that object was being seen from different perspectives at the same time. That’s the sort of the effect I was looking for with this collection. I was very inspired by one photo in particular, where we see a woman being followed by a man in a street. When the photo was taken, the man was so close to the woman that his presence forms a halo around her. So, is he a guardian angel or a threat? The perspective effect was disturbing.” 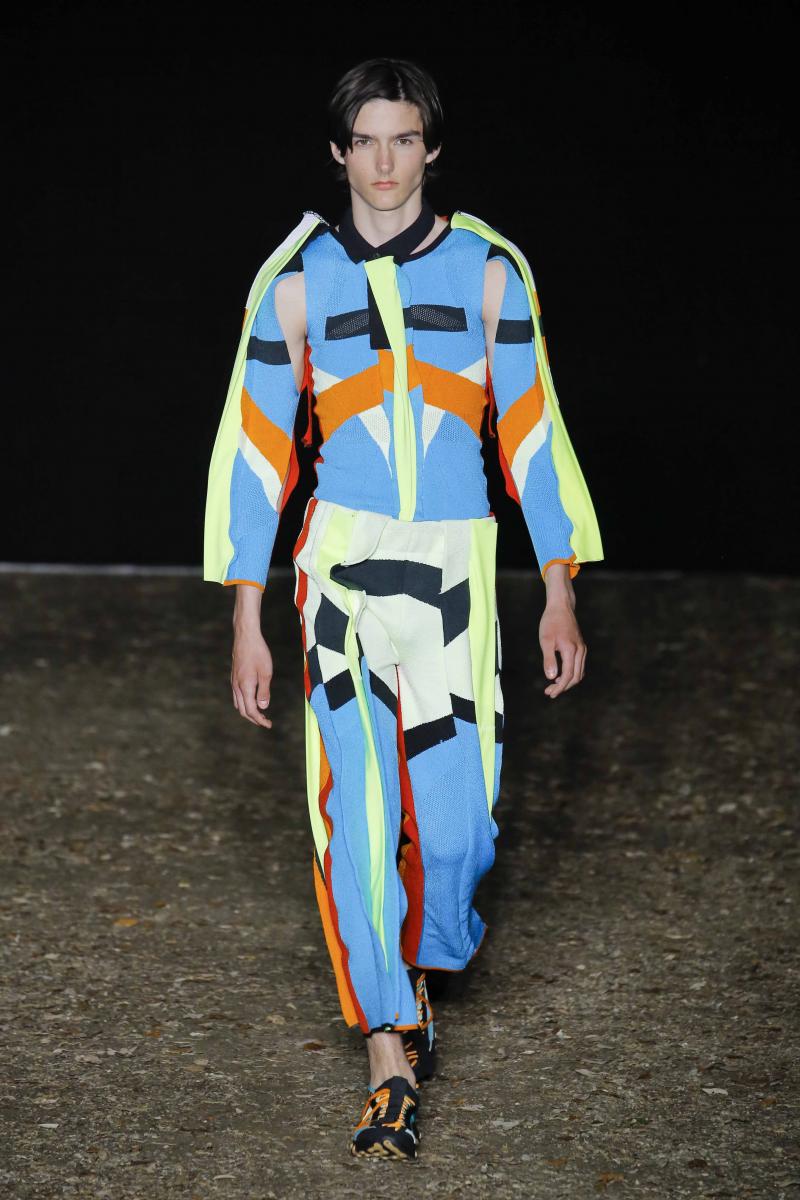 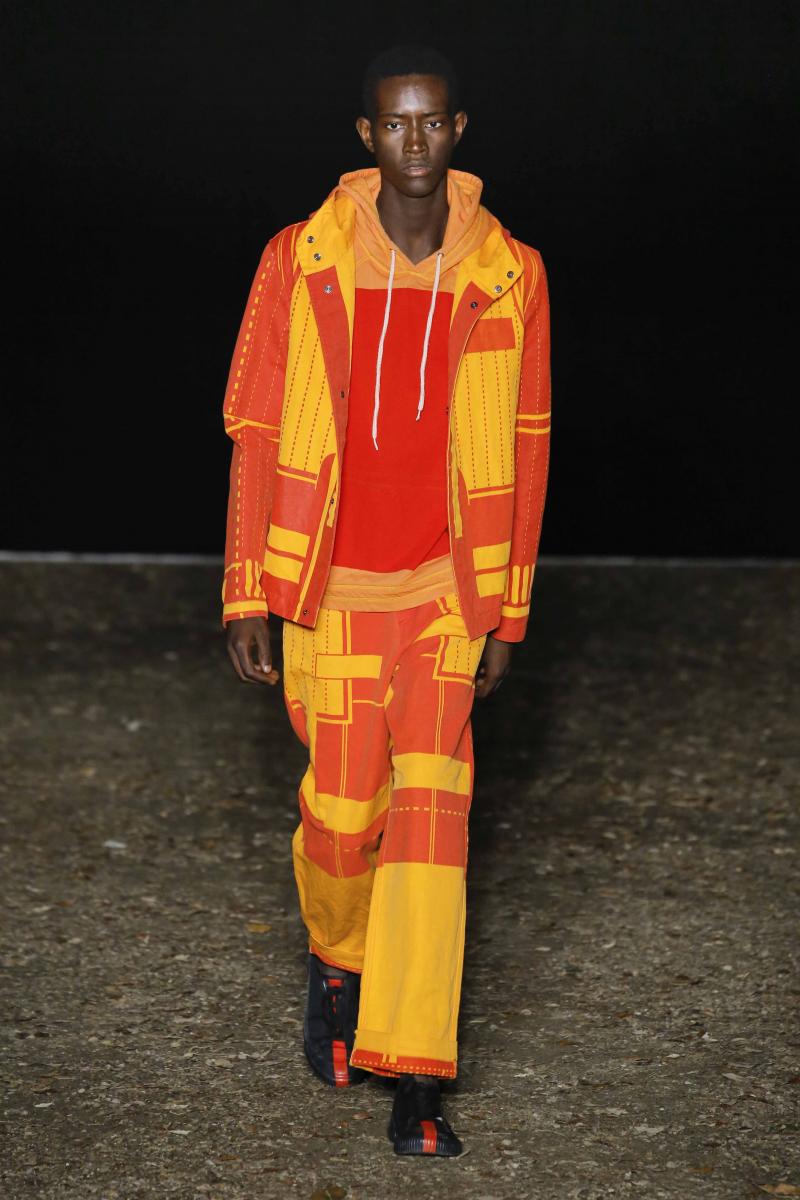 The designer recreated this effect in his show. Some of the models wore a structure that formed a sort of aureole around them – a wooden frame harnessed to the body. A spiritual aura? Or more prosaically perhaps, a crime scene, with the outline recalling the chalk lines drawn around a murdered body? “When you ask 10 witnesses to describe a scene, you will get 10 different stories. I tried to incorporate all these stories in one garment,” explains the designer. In the first half of the show, Craig Green was inspired by another vision, “The scene takes places at a festival. A man hugs his girlfriend in his arms so tightly, that from behind we get the impression his trousers have become one with her skirt.” In the show, colourful ruffles added to masculine outfits form “gills” that prolong them, like a halo or a skirt. On numerous looks, the “feminine” garment appears like a ghost on the “masculine” garment. Genders merge and melt together to create a genderless outfit.

The “feminine” garment appears like a ghost on the “masculine” garment. Genders merge and melt together to create a genderless outfit.

The master of visual effects ended his show in glory with perfectly accomplished tie dye toga and tunics: the must-haves of the season. On a more general note, the colours were particularly vibrant. The designer admitted, “I recently watched a documentary that explained how associating two colours can create a unique feeling or emotion. Red on blue creates a vibration, a spectrum of light that prevents you from focusing on it.” 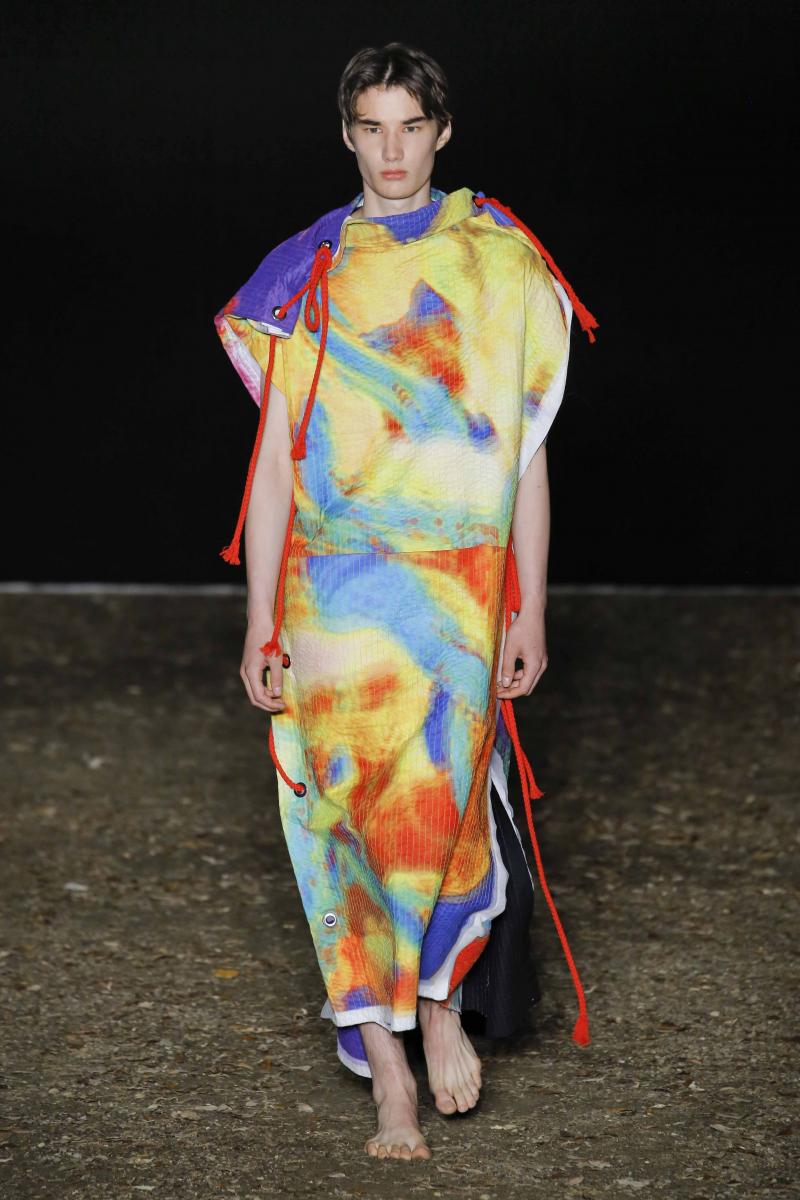 On the sociological and political side, we have to go back to his obsession with uniform, which has never been so fully assumed: “I was inspired by postmen’s uniforms and what cleaning ladies wear. For me, they're the real unrecognised heroes of contemporary times. No matter what your social background is, or who you are, with a uniform you become part of a community where everyone is equal. The uniform is not a symbol of oppression, but one of inclusion.”

“The uniform is not a symbol of oppression, but one of inclusion.” Craig Green

Social pragmatism and metaphysic visions, Renaissance classicism and 1970s science fiction… Craig Green is a multiverse kind of guy, as if one event – the show – can contain several parallel universes and different temporalities. Its future is anterior: a future imagined in the 1970s with its doctors’ uniforms belonging to a spaceship, or the colourful tie dye garb of a Raëlian sect. Its future is also a contemporary one, after all didn't he design the costumes for Ridley Scott’s recent foray into outer space, “Alien: Covenant”? His own future lies before him and his vision of our reality has yet to reveal all its secrets. “Sometimes reality is more terrifying than fiction”, he reminds us. We can’t wait for him to scare us again soon. 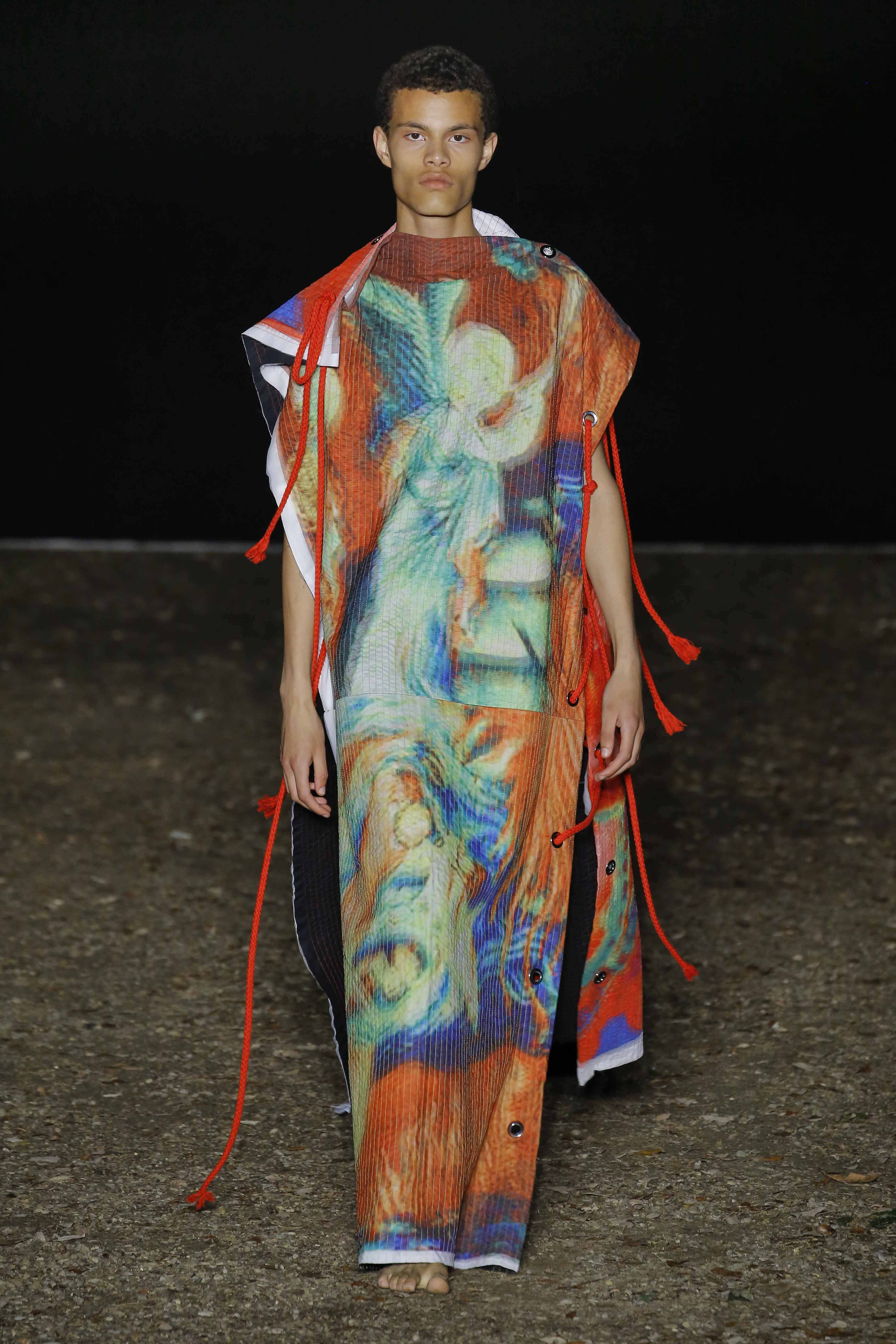 The figure of an angel, omnipresent at Craig Green’s spring-summer 2019 show at Pitti Uomo in Florence.