“There are no rules about how you represent yourself.” Interview with Grace Wales Bonner

The artistic director of London’s Serpentine Galleries, an eminent figure in the art world and a longtime contributor to Numéro, Hans Ulrich Obrist has been attentively following the career of Grace Wales Bonner since her début. In a class all of her own in the fashion world, the 26-year-old Londoner, who was born to an English mother and a Jamaican father, anchors her collections in solid intellectual research that mixes critical theory, literature, the fine arts, music and history. Her collections seek to express the way European and African cultures currently influence each other, to question the representation of black men in today’s society, and to go beyond the codes and stereotypes associated with gender. The 2016 LVMH Prize winner also regularly publishes zines that record her research using photographs, texts and collages. Hans Ulrich interviewed Bonner for Numéro this August, as a way of answering the question we’d asked him, namely what is it in Bonner’s work and approach that deserves to be understood in the context of art? 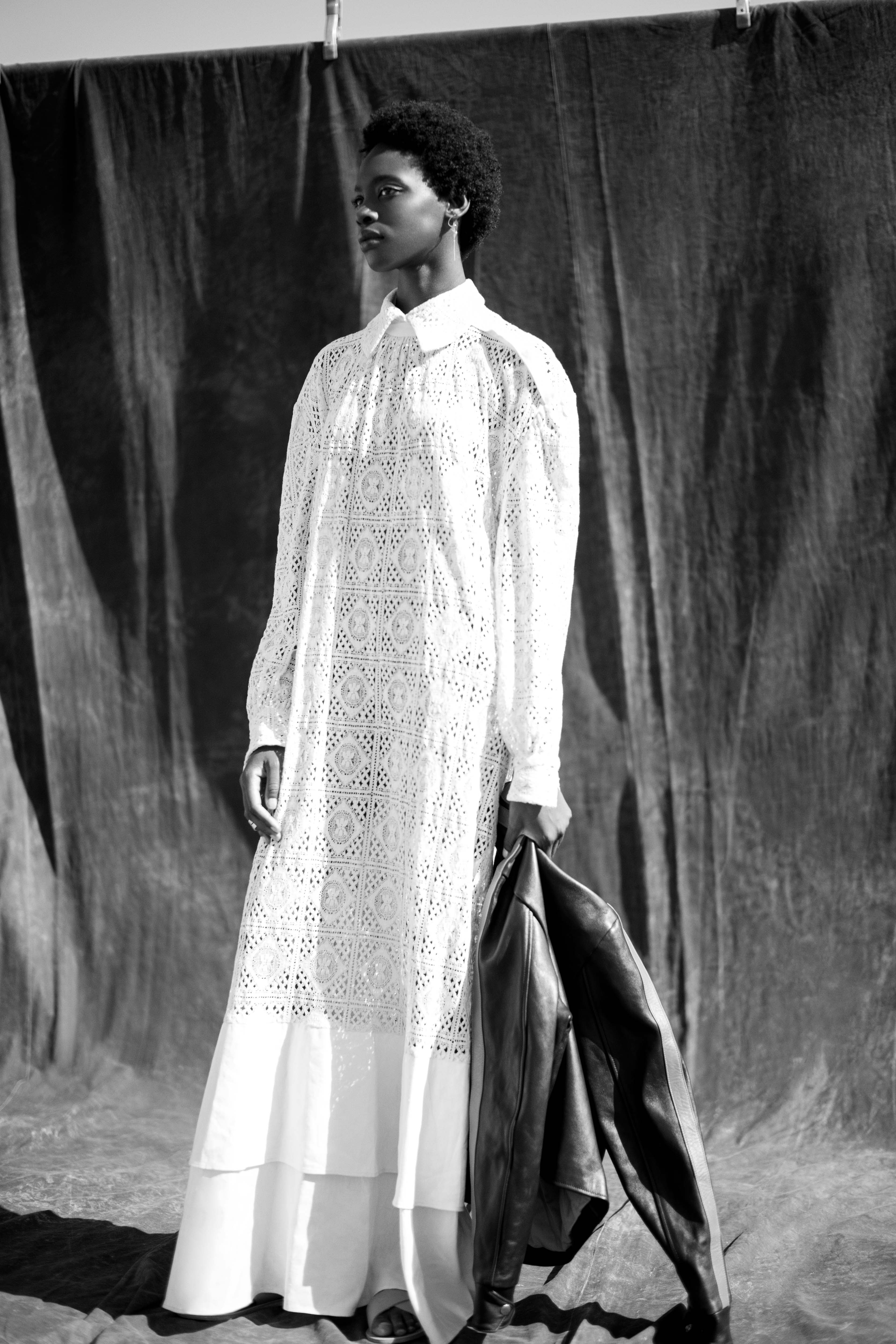 Hans Ulrich Obrist: When we last met, I mentioned to you the writings of Édouard Glissant and his idea of mondialité, which he developed in his book Traité du Tout-monde. For him it was about re-establishing a dialogue at a local level, and showing all the diversity that exists in the world – which is to say the antithesis of homegenization that's brought about by globalization. It’s an idea that seemed interesting to me in the context of thinking about fashion.

Grace Wales Bonner : I’ve been reading the book you gave me by Glissant about mondialité, looking at Modernism in the Caribbean and thinking about how that transcribes to an aesthetic. That’s kind of where I’m at with my research. Also I think that travelling is very important for conceptual research. My way of working consists in large part of mixing with “real” people and engaging with them locally, and seeking inspiration in them. I often think about what I’m doing as a conversation with people – I work through conversations and collaborations, which allow me to have all sorts of different perspectives.

That’s a very interesting answer because Glissant said he looked at the islands of the archipelago – he was from Martinique – and said that it’s not because we’re in dialogue with other islands that we lose our identity; on the contrary, the identity becomes richer, more diverse, more hybrid. And to me this is why your multiple collaborations are so interesting. Since we first met a couple of years ago, your collaborations with music have become more and more intense. Could you tell us a little bit about your work with Blood Orange’s Dev Hynes?

I guess I’ve always been very interested in Dev’s work because it’s so multi-faceted: personal film, choreography, composition, performance, etc. He’s very bold in terms of his output, and that’s exciting. We worked together on a film about a very young dancer I discovered in Johannesburg, a 17-year-old called Leroy Mokgatle. The film is based on footage we shot while we were out there, but also on research into the different forms of music and sound in South Africa. The way Dev’s music formed the film was really quite organic. The project was also a collaboration with photographer Harley Weir, who I’ve been working with since 2013. Harley and I first teamed up together in Dakar in 2014, and we also did a documentary in Senegal with local wrestlers and all sorts of different types of dance. We’ve developed a way of working where we reconsider some of the ideas that come up for a collection through photographs or through film.

You also produce zines which reproduce the research you carry out for a particular collection in the form of images, texts and collages. One of the more recent ones you did was with the singer Sampha, from Sierra Leone, who also authored the soundtrack to your autumn/winter-2017 runway show.

Yes, I’ve been working with him for the last year on a zine and on the visuals to go with his album Process. For my collection it was really interesting to work with someone who has a body of work that already exists, and to think about how to represent that musical oeuvre visually. The zine was a partition of different works. We collaborated with twins from the French Caribbean called D u r i m e l , w h o p h o to g r a p h e d Freetown and Sampha’s family and documented his story there. I also worked with Sampha’s personal photographs and collages, so it was a mixture of abstracting lyrics, partitioned work and collage. Given what’s happening right now in Sierra Leone it feels important to have this really beautiful document of our time there, and I’m hoping we can do something with it to help support relief efforts with regard to the tragedy happening in the country at the moment.

Can you tell me a little bit about your autumn/winter-2017 show?

It was very much informed by black literature. I started by looking at an anthology of black writing that I used essentially as a bibliography. I also came across an essay written by Hilton Als about his exhibition James Baldwin/Jim Brown and the Children – the photographs that accompanied the essay really informed my thinking. I guess the collection was about minimalism and exploring sexuality in quite a direct way, at any rate much more so than I’ve ever done in the past.

And what about the influence of Baldwin himself? When we had lunch the other day you were talking about how his celebrated novel Giovanni’s Room had inspired you.

It feels quite natural to be inspired by literature. There’s an idea of characters that I can get quite strongly through novels, and with Giovanni’s Room there’s a very specific idea of Paris and Parisians that emerges. For me it’s all about the atmosphere, as well as building a sense of character.

I also read that Gary Fisher was a reference for this collection. How did his notebooks, which were published after his death from AIDS-related illnesses in 1994, influence the clothes?

The notion I got from the notebooks is that he was leading this kind of double life, having an interior and exterior life, and that helped me with the essence of the characters I was trying to present. There’s a progression in the show where the characters start off in new work-like wear, and then it transitions into the night, and they’re wearing early-hours kind of nightlife clothes, and suddenly there’s a different type of sexuality. I was trying to represent that tension in the way the show progressed through a transformation.

“There are no rules about how you represent yourself. My work is an attempt to show a spectrum of myself rather than a certain way of behaving or looking.”

You’ve been quoted with respect to that show as saying “I had some pressure with this collection to prove my blackness.” What did you mean by that?

I feel that quote might have been taken slightly out of context. I was talking about my experience as a teenager when I felt a certain amount of pressure to be a certain way. Getting older, the more research I’ve done the more I’ve seen examples of different ways of being. There are no rules about how you represent yourself. My work is more an attempt to show a spectrum of myself rather than a certain way of behaving or looking, and I think that was more what I was trying to say.

In the show before that one, you got the artist and author Lynette Yiadom-Boakye involved, and she ended up writing a shor t story specially for it.

With that show, which was spiritual, I had in mind this idea of a strange preacher. I reached out to Lynette to start a conversation and she responded to the visual research I gave her. I partly had in mind the novel Invisible Man, by Ralph Ellison, where at one point the main character finds boys on the street and starts recruiting them for a movement called the Brotherhood. It’s a turning point in the book. I was talking to Lynette about that moment, and how you can use the street to transcribe a vision and a transformation, and also about carnivals and how the sounds transform the environment. Her work really echoed on that character and really helped me push the show further.

You talk a lot about music, and you’re passionate about art, literature and all these different things, but are there any fashion figures to whom you feel a certain proximity?

I feel like London’s a really exciting place to be at the moment, there’s so much interesting work going on. The stuff that Craig Green is doing, for example, is incredible. I also really love the work of Shayne Oliver at Hood by Air. I just met him!

The energy! Their shows are an amazing form of experience, they’re very powerful and original, and they’re also a very authentic group of people. I really admire the way they work and how they’ve done things on their own terms. Having some time off to be with Shayne and Craig – I’m sure that would be absolutely amazing.

Do you have any other heroes and heroines in fashion?

Miuccia Prada, for her very intelligent and political designs and her reflection on society. I think she has a very wistful, clever way of working. And I love Phoebe Philo too!

What about your next show – do you already have a theme?

I’m thinking about the Caribbean, a place that mixes so many influences from a multitude of different angles. My father’s from Jamaica, so that’s basically where my research is going at the moment.