The confessions of Manfred Thierry Mugler: George Michael, Beyoncé, his physical transformation and his new career

In the 1990s, Thierry Mugler made fashion history with high octane runway way shows and his gourmet fragrances, which remain top of best-selling perfume lists today. Having been discreet for a few years, the artistic director is back with a new name, Manfred Thierry Mugler, a new goliath-esque body and a new job as music-hall director. Here he shares his thoughts with Numéro Homme in an exclusive interview. 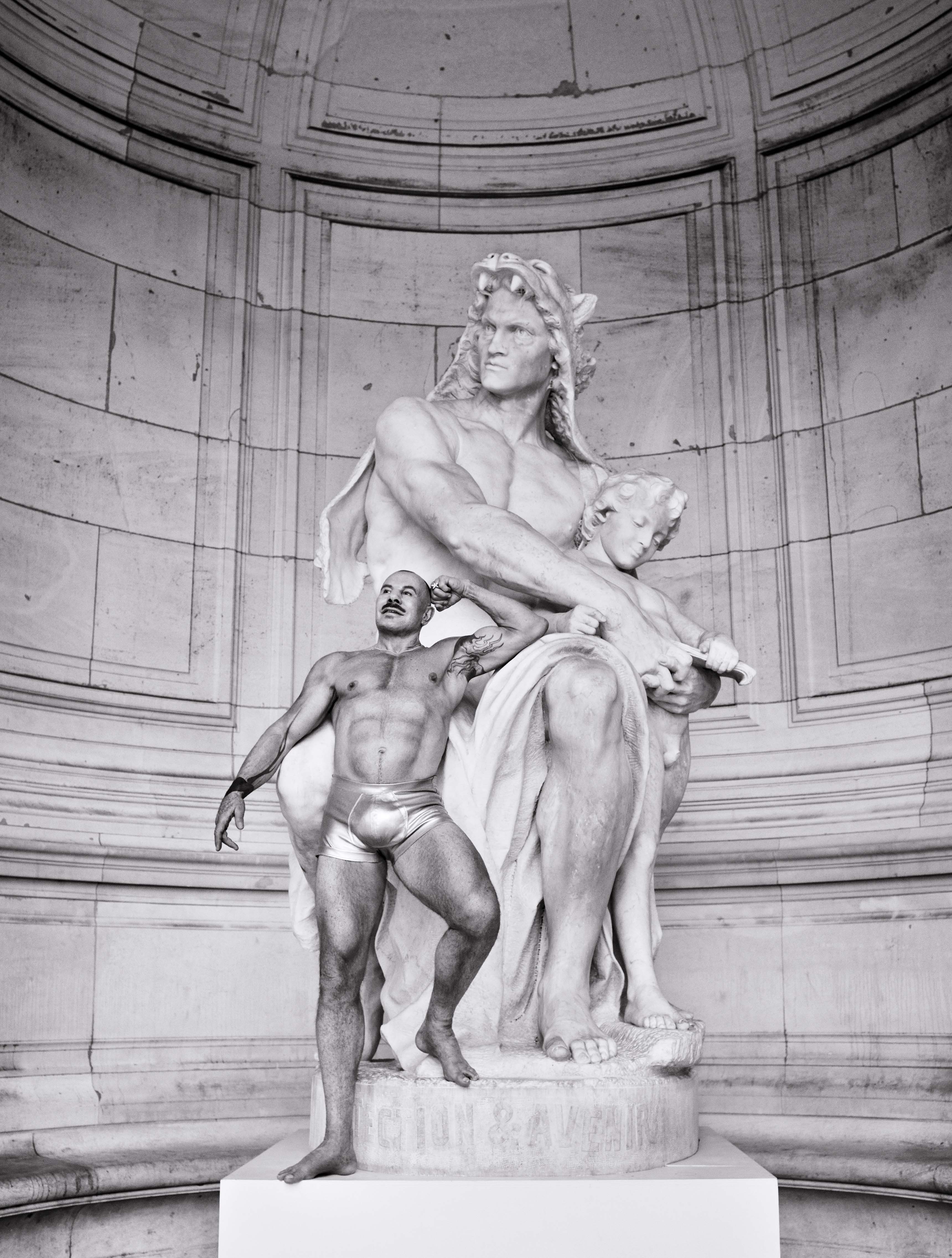 Numéro Homme: Why made you decide to give up fashion in 2003?

Manfred Thierry Mugler: Mainly because fashion was an incredible means of artistic expression in the 70s, 80s and 90s, but it wasn’t like that anymore in the 2000s when creation was completely stifled by marketing and business. Not to mention the most infernal pace and impossible deadlines to keep up with between the cruise collections, the pre-collections, the menswear and the womenswear, the ready-to-wear, the haute couture… You just have to look at all the designers who’ve either lost it or decided to quite while the going’s good. I have to say that I always saw fashion as a very useful and exciting vector for stage direction, but one that has limits. For 20 years my heart broke having to refuse video and performance projects because I simply didn’t have enough time. To shoot a video in Los Angeles for example, you had to be reactive within three weeks, and so I missed out on doing films for Cher – in her heyday -  Aretha Franklin, Bette Midler and so many others. Although as you must know I did find time to make Too Funky for George Michael…

… Yeah now we’re on this subject why exactly did you two fall out on that set? People have been asking the question for 20 years now.

It’s quite simple: George had promised me by email – the day before the shoot, that we were in complete agreement over the script, the story-board and the editing of the video. He said he didn’t want to be in it, unlike all his other videos. So far so good. The next morning, I arrived on set at the Boulogne Studios, where almost 500 people were waiting: one hell of a team, dancers from all over the world, from Japan and Australia, all the top models – Linda, Eva, Nadja, Tyra –, incredible people like Rossy de Palma and Julie Newmar – who played Catwoman in the first Batman – and the female impersonators Lypsinka and Joey Arias… Then George rocks up at 9am and says contrary to everything we’d agreed on, that he wanted shots of him in the video. I told him that was impossible, that the story-board was all sewn up, but I knew he took it badly. We carried on as originally planned for two days but on the last of the shoot he lost it and summoned the whole team to announce: “Mugler is fired. Now I’m the director.” There was a deathly silence on the set, no one moved. I didn’t know where to put myself. Then Julie Newmar spoke out and said indignantly, “I know all about your dealings in Los Angeles Mr Michael! Know that we’re all here for Mugler and not for you!” All the top models then chimed in saying they wouldn’t stay if I didn’t. So, George stalked out and locked himself in his dressing room, after his bodyguards had tried in vain to throw me out. Anyway, we finished the shoot without him, but he ended up adding shots of himself during the editing. In the credits at the end of the video, you’ll notice the words “directed by” are followed by a question mark, for the simple reason he was contractually obliged to acknowledge me as director. To be honest he completely butchered the video for Too Funky in the editing room, and we ended up with something insipid because his only goal was the promotion of his album. He most notably cut the gay and transgender scenes, which seemed a shame considering the royalties from the record went towards the fight against AIDS. It was only years later that we patched things up thanks to Beyoncé…

It’s quite a sweet anecdote and pays tribute to George: in 2009 I was in London for the opening of I Am… Beyoncé’s world tour, which I was the artistic director of. And just then I got a message from George, funny, adorable… “Hi Thierry, it’s George, the poor English queen manipulated by his managers in Los Angeles… But all that’s behind us now. You made the most beautiful video of my career… And my dream now is to appear on stage with Beyoncé tonight.” So, I called Beyoncé and said, “Okay Miss B, we’ll say yes to George on one condition: that he sings If I Were a Boy in a duet with you!” The poor guy was busted in public toilets in LA and had been forced to come out, so I thought that track was very appropriate. Beyoncé was like, “That’s fine, that’s fine.” And so, there was George on stage at the O2 Arena with her singing “If I Were a Boy”! It was a total triumph.

“I haven’t had any implants contrary to what you’re suggesting, but I have undergone facial reconstruction following a serious accident at the gym that completely smashed my face. If that hadn’t happened I would never have done anything with my face.”

Is Beyoncé genuinely nice or a total pain in the ass?

She’s taught me a lot, I never saw anyone blessed with such powers of concentration. It’s extraordinary. She is an animal on stage, where she embodies this utterly instinctive beauty. During the tour, there were more than 500 people in her entourage who didn’t stop talking during rehearsals, but when there was even the slightest decision to make, she was able to shut out all the noise and focus like a tiger on a lamb.

Why have you rechristened yourself Manfred Thierry Mugler?

I didn’t rechristen myself, Manfred is my real first name, the one that appears on my passport. For the fashion world I needed a name that was more synthetic, and for a French brand the name Manfred, with its Austro-German resonances, did quite hit the mark. So, I kept my real name tucked away all these years and started using it again recently for these new, more personal adventures that are more linked to my childhood.

Your change of name seems to be accompanied by a rather astonishing physical metamorphosis… What’s that all about?

It’s not so much a transformation as an evolution, the search for a physique more in tune with my state of mind. One of the other reasons I left fashion was because I got so screwed up over twenty years of sleepless nights creating superheroes and superheroines. It reached a point where I was so pissed off with putting myself down to elevate others and I said to myself, “That’s enough bullshit, from now on I am going to take care of myself for a while and become what I was when I was a kid: strong and physical, a joker and a fighter.” Don’t forget that I was a dancer for 15 years, that I’ve done huge amounts of acrobatics, trapeze and kathakali – an Indian dance that’s a mix of martial arts, mime and singing – a sport that’s very complete, very violent, very telluric, very hard. The physical mutation was a sort of return to myself, a repairing and reconstruction too. 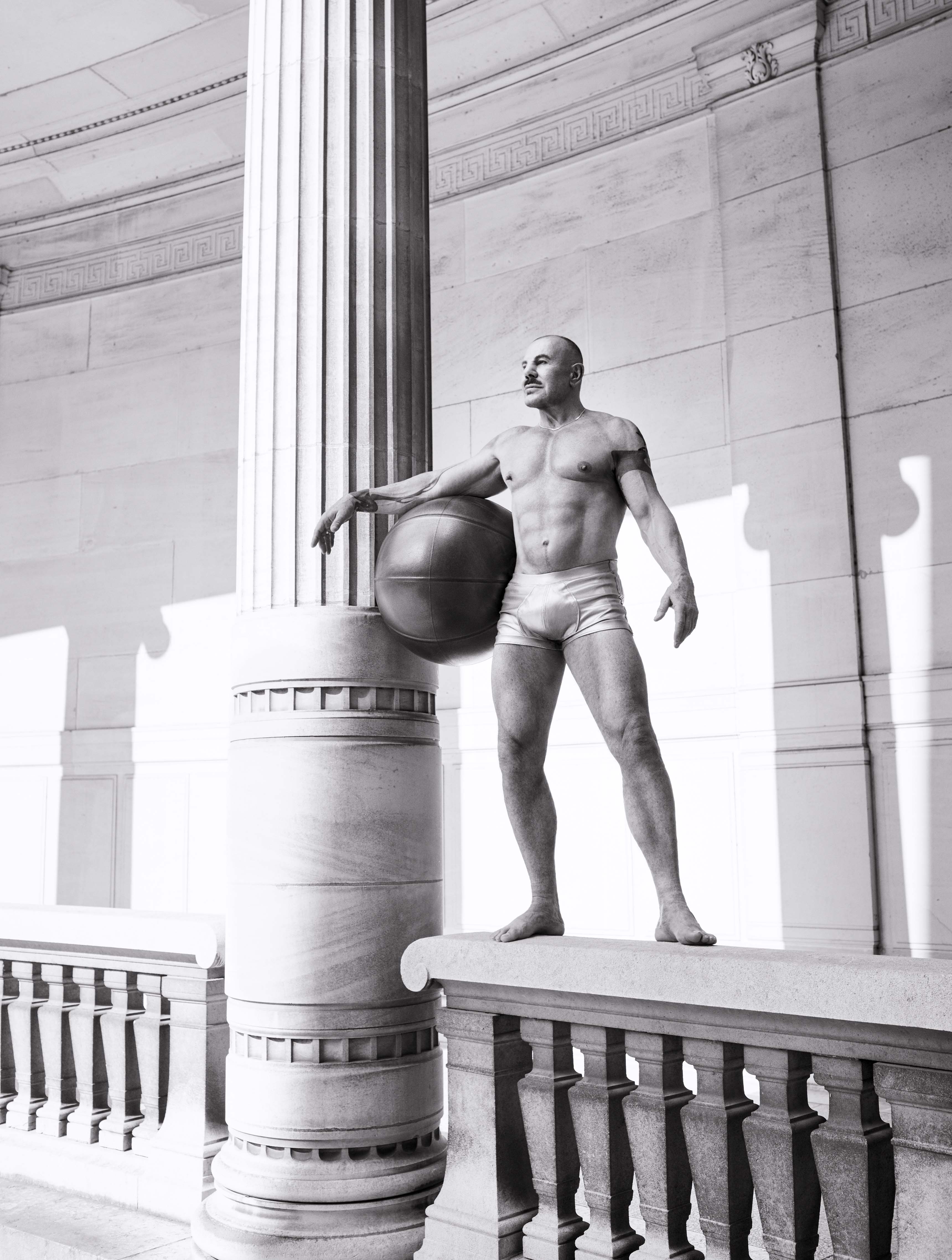 What is your aesthetic ideal? Who or what would you like to resemble?

I’d like to look like a statue by Arno Breker, the Michelangelo of the 20th century and favourite sculptor of the 3rd Reich. It can’t be denied that our dear daddy Adolf [Hitler] – I’m only joking when I say that, promise – knew how to surround himself with the very best, whether it was in the fields of architecture, graphics, photography or sculpture.

What were the different stages involved in this extreme ‘relooking’? Diet, sport, implants, facelifts,

The first step was awareness, humility. In life you have to know what you want, where you want to go, and what you want to become. In our era, with the help of good technicians, good doctors, and good professionals, you can do what you want with your body. So, I armed myself with an iron will and a slew of nutritionists, therapists, coaches… And an army of plastic surgeons, if I’m not mistaken. I haven’t had any implants though contrary to what you’re suggesting, but I did undergo facial reconstruction following a serious accident at the gym that completely smashed my face. If that hadn’t happened I would never have touched my face, but seeing as he had to complete rebuild my chin, I said to myself, “Why not take advantage of this to sort things out a bit?”

You often refer to your childhood, do you talk about it with your shrink?

There is nothing more beautiful, or harder to find than your childhood soul. Especially in this era.

Have the royalties from Angel made you a multi-millionaire?

You can’t be a multi-millionaire in France (laughs). And that’s my answer.

“Monsieur Arnault did approach me for Dior, just before the job went to Gianfranco Ferré.”

What are the advantages and disadvantages of being rich and famous?

The advantages are that there’s always a table for you in a restaurant, and you can turn up bare chested at the hotel at 3am, when its minus 15 degrees. The disadvantages are that when you’re chilling in a night club there’ll always be someone to throw themselves on the floor and lick your boots.

I don’t see a problem with that?

Where the hell did that photo come from?

I never found out.

How did the AIDS years change you?

I was in a relationship when the scourge hit the gay community. I was very committed, which meant I slipped through all the nets. Others weren’t so lucky. I witnessed the most shocking scenes. I really did see innocent angles fly away, aged 20, 21. I remember for example the extraordinary illustrator Antonio Lopez who came to my birthday in New York even though he was incredibly ill - it was the last time he ever went out. What was most disturbing was the terrifying beauty of these boys who were all emaciated by illness and pain. It was abominable, a hecatomb.

Which designers interest you today?

Apart from Iris van Herpen, I can’t think of anyone else.

Legend has it that Bernard Arnault offered you the post of artistic director at Dior. Is that true?

Monsieur Arnault did approach me for Dior, just before the job went to Gianfranco Ferré. I met him several times to discuss it, very clandestinely, before he realised that perhaps I had too much personality for the job.

You only occasionally give interviews… Why such reticence in the face of the press?

I had a hard time when I was doing fashion. The journalists didn’t understand my collections at all, they judged them from idiotic point of views, with stupid questions about the season’s inspiration. It was a pain.

Why do you think that some critics saw the hyper-femininity of your creations as degrading to the image of women?

When it was the complete opposite! You know sometimes it’s better not to try and understand human bullshit. It’s like when I had black beauties walk the runway at the Palais de la Porte Dorée in a tribute to Africa, and I was accused of racism. As you can imagine I was absolutely gobsmacked.