The virtuoso, avant-gardist fashion designer Thierry Mugler is currently being celebrated at The Montreal Museum of Fine Arts with an exhibition entitled “Thierry Mugler: Couturissime”. Discover nine of the collections that marked the fascinating history of his fashion house. 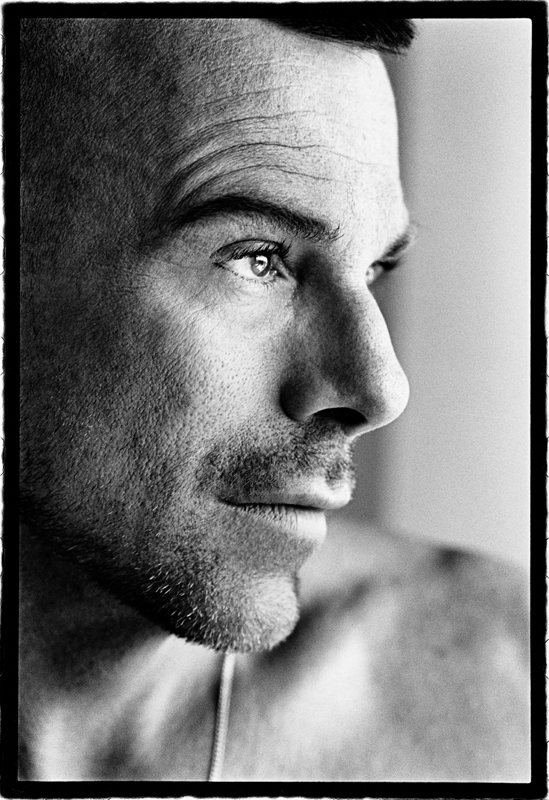 He is one of the most important fashion designers of the modern era: for 30 years, collection after collection, Thierry Mugler deployed his avant-gardist vision of fashion. Under his impetus a new woman appeared on the runway and she was smoulderingly powerful. Reshaped at the end of the 1970s by a structured silhouette that was instantly recognisable, she had a tiny corseted waist, large shoulders, and an emphasised bust and hips. He thought he would become a ballet dancer, but the young Thierry Mugler ended up transcribing his love of the body through designing clothes. In 1973, with daring and perseverance this perfectionist created his first collection Café de Paris, and two years later organised his very first runway show in spite of minimal financial means.

With Mugler, femininity is in your face and assumed one hundred percent​

Extravagant, sexy and sometimes irreverent, “his fashion conjugates with the superlative”, writes Nathalie Bondil, director general and chief curator at the Montreal Museum of Fine Arts. “Oversized hats, neon wigs, (…), aerodynamic busts, tight-fitting dresses, gleaming corsets, cleavage, butt”, all features that define the Mugler style. With him, femininity is in your face and assumed one hundred percent: from his first total look of 1979, his pieces guided women towards an emancipation through the affirmation of an armoured body that was undeniably resistant to any social affronts. Beyond the silhouettes, his virtuosity is also illustrated by his use of unconventional materials: by adapting rubber, chrome, resin and plexiglass to the curves of a body, the designer marked a very distinct turning point in 1980s-90s fashion, which gradually became more fantasy than wearable. His keen eye fused a liberated sensitivity to the world of science fiction with pure futurism. With Mugler fashion became art. 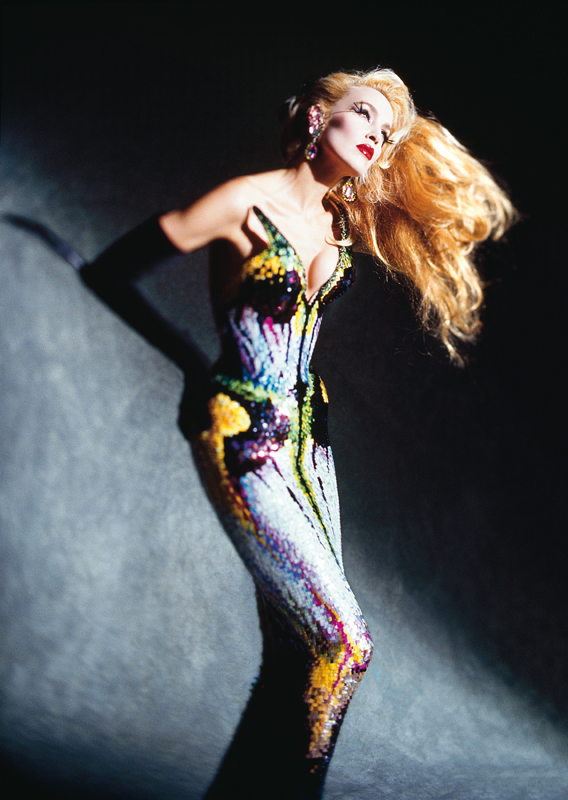 And yet after two decades of prolific success, the designer bowed out in 2001, after presenting his last ready-to-wear collection. Weary of the ever increasingly frenetic pace of the fashion industry, he turned his attention to creating shows and designing stage costumes. However, his rich heritage has never stopped being revisited by designers openly claiming his influence, as well as numerous pop stars including Lady Gaga, Beyoncé and Cardi B, who still wear his outfits today. Currently being celebrated with a grand retrospective at the Montreal Museum of Fine Arts (MBAM) – accompanied by a first book published by the museum in collaboration with Phaidon – his immense oeuvre is revealed there though a judicious selection of pieces. To better understand the influence of this fashion utopist, we look back at nine of his most emblematic collections. 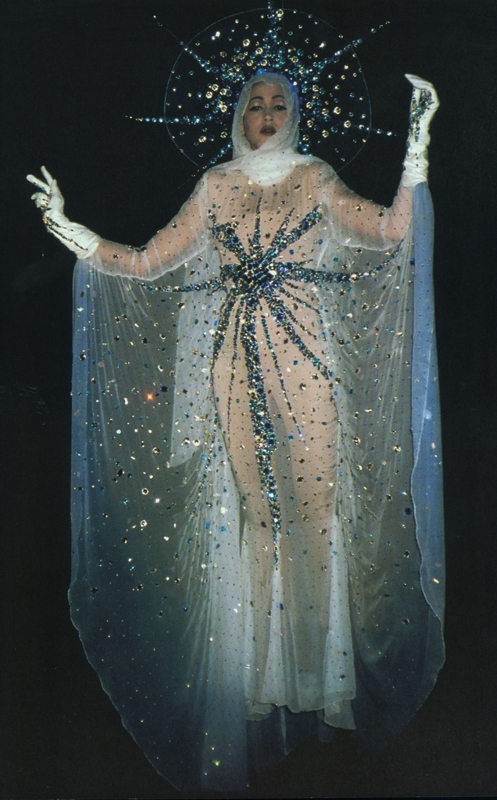 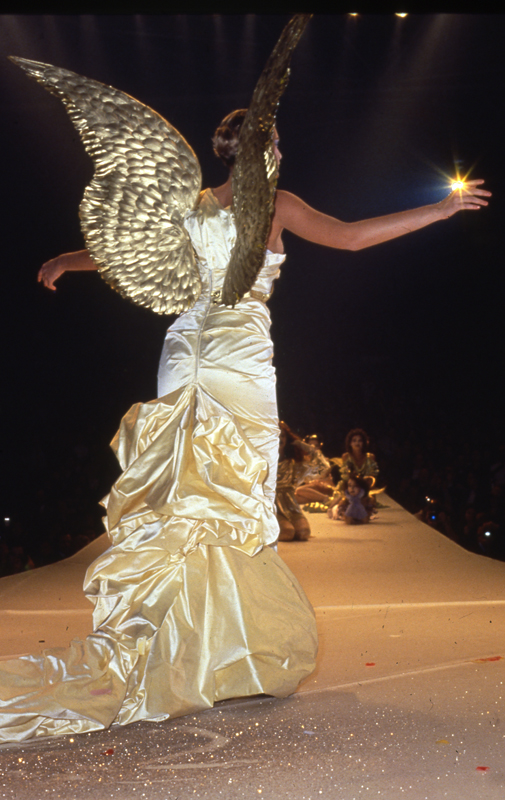 In March 1984, Thierry Mugler made a splash: to celebrate the 10th anniversary of his house, he organised the first ever runway show/performance open to the public in the West. To host this ambitious project, the designer chose the Zénith, a concert hall in the Villette neighbourhood of Paris. In full 1980s effusion, fashion came together with the theatre and music worlds more than ever before in this highly colourful production, which drew more than 6000 spectators. On the runway, 350 outfits paraded past the audience: women adorned with halos and gold wings were the angels in this collection, pushing the wonder to its paroxysm with the majestic descent of Pat Cleveland from the ceiling, a Madonna-like figure draped in celestial and starry finery. 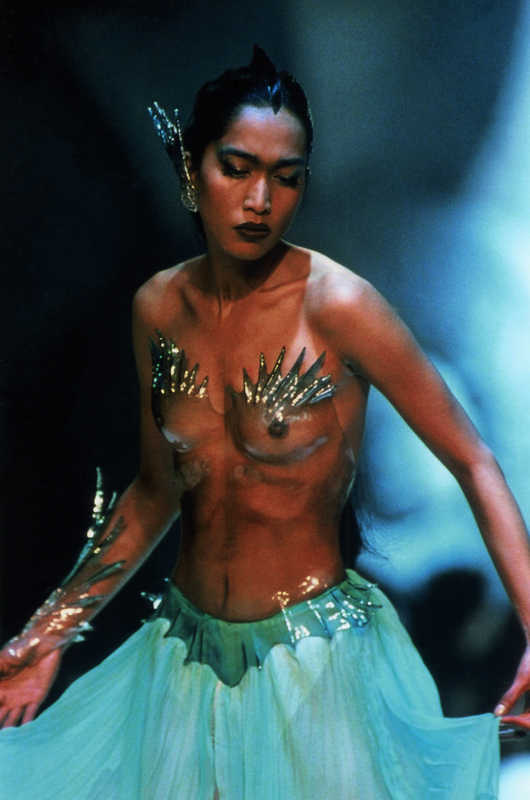 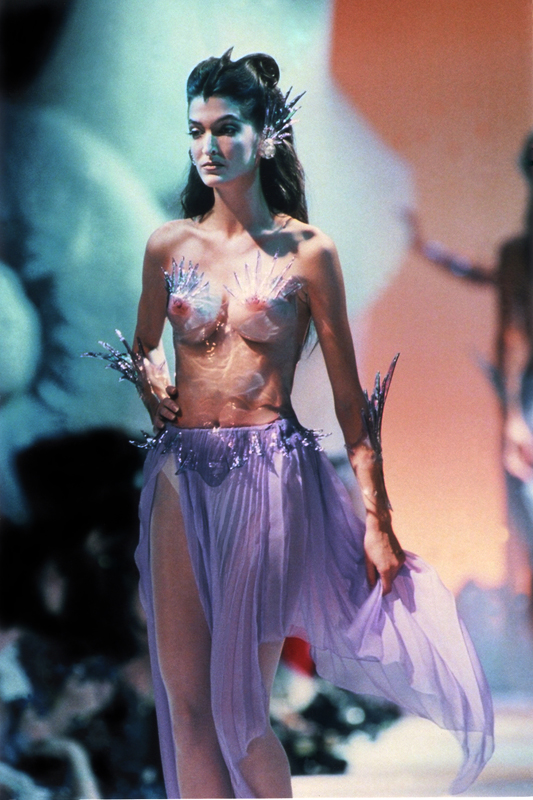 Spring-Summer 1989 ready-to-wear: Mugler and his mermaids

The aquatic world has always been a fertile source of inspiration for the designer. In the Les Atlantes collection, he drew inspiration from marine fauna and flora to tell the tale of an abyss peopled by mermaids. Structured suits, metallic dresses and jumpsuits followed one another in hues of white, blue and silver. The masterpieces of the collection were the shell-like bustiers in canted glass with matching accessories, made by the master-sculptor Jean-Jacques Urcun, marking the beginning of a long collaboration with the designer. 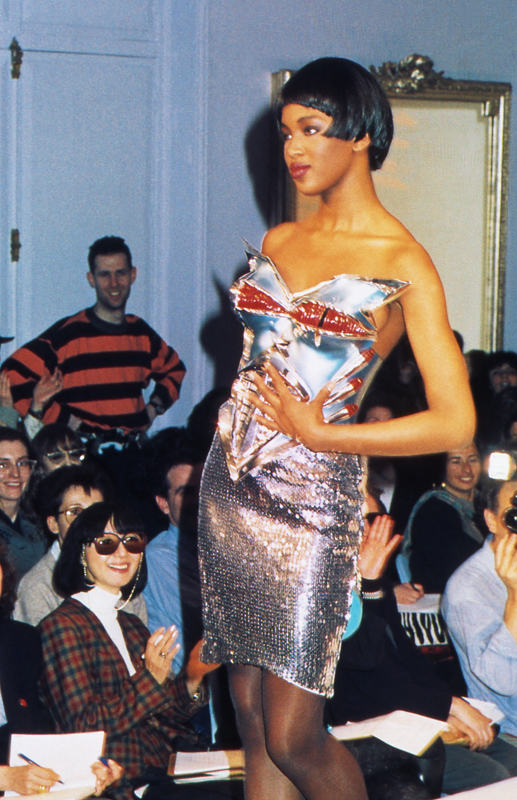 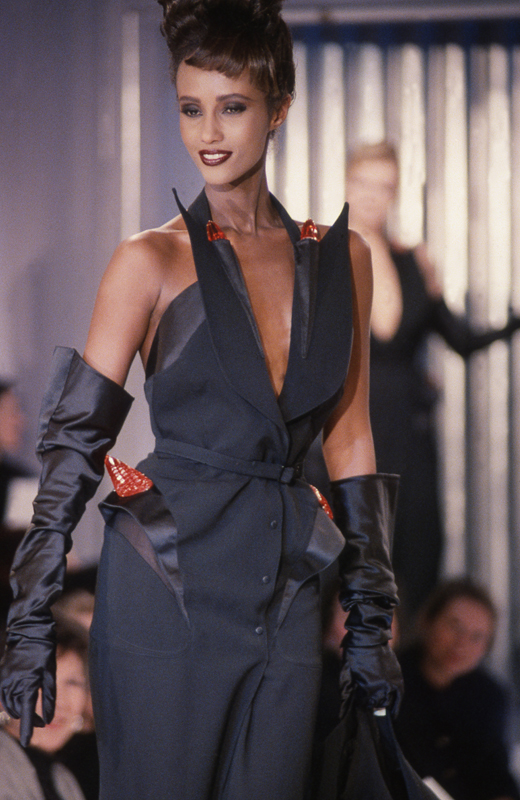 With Thierry Mugler’s clothes regularly revealing his love for construction, it came as no surprise when his garments actually began to meld with automobiles. With the winter Buick collection, he made overt references to the American cars of the 1950s, and in particular the designs created by Harley J. Earl. Through his choice of cuts and materials, the designer attempted to capture their powerful lines where metal and reflectors meet fabric. A very literal example was the famous bodywork-bustier “roulé comme une Buick” [drive like a Buick], worn by Naomi Campbell (and made, once again, in collaboration with Jean-Jacques Urcun), illustrating the fantastical spirit of Mugler known for mixing humour and sensuality. 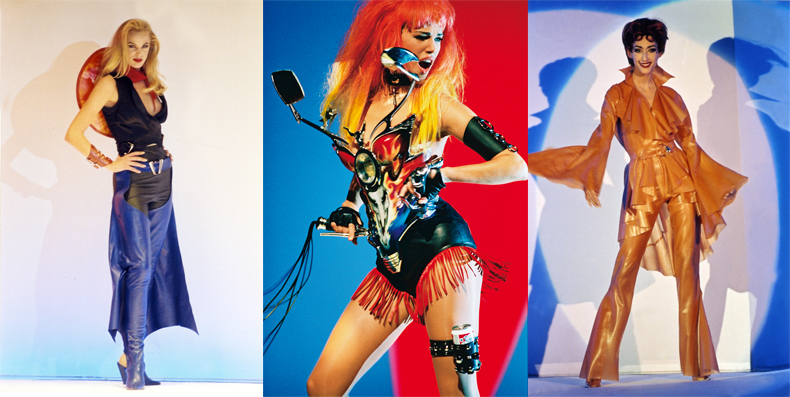 Spring-Summer 1992 ready-to-wear: leather and rubber with the Cowboys

Two years after cars, it was the Far West cavaliers that inspired the designer. For his Cowboys collection, he sent an army of bikers down the runway all dressed in leather, from a corseted biker jacket with fringes to thigh boots attached to the waist -  20 years before those imagined by Vetements with Manolo Blahnik. As well as leather, cowhide and cowboy hats, Thierry Mugler also explored a material that hadn’t until then been much exploited in luxury ready-to-wear: rubber. One of the most memorable pieces of the collection remains his “Harley Davidson” bustier complete with handlebars and wing mirrors, a nod to the earlier bodywork-bustier of 1989. This piece would become famous thanks to George Michael’s “Too Funky” music video made by Mugler himself from images of his runway show. 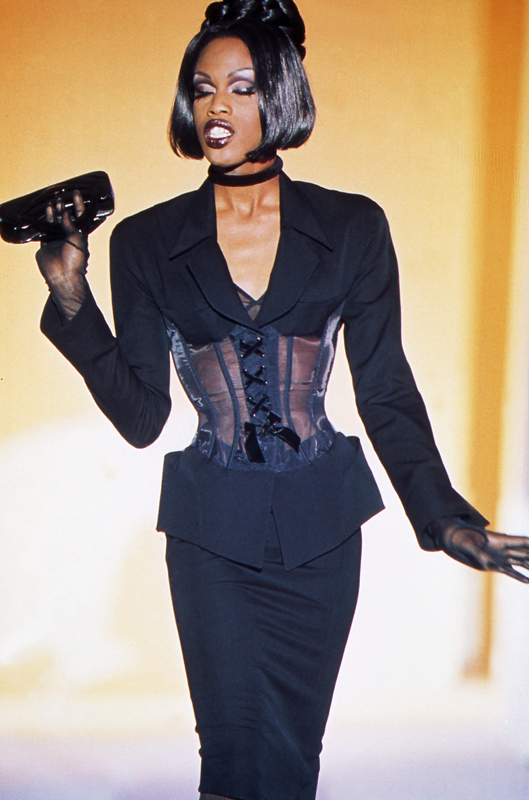 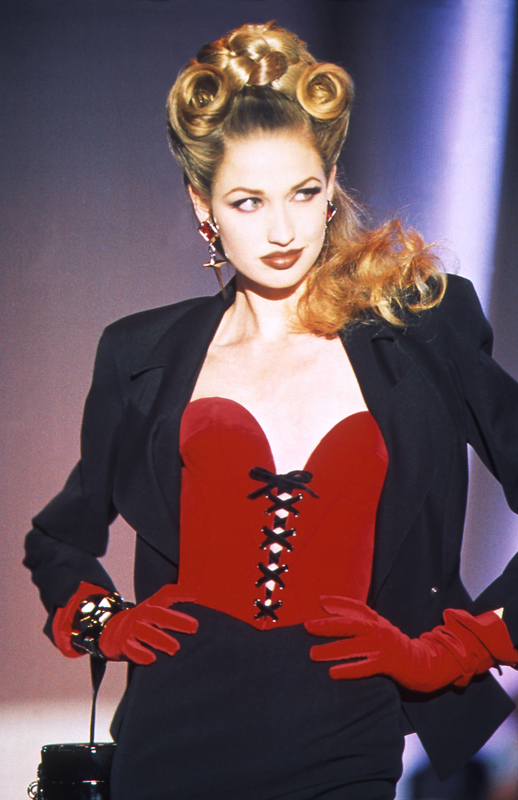 In 1992, Thierry Mugler was authorised by the Chambre syndicale de la Couture to join the very closed club of haute couture as an “invited member” and present his first couture collection. At the time haute couture was suffering from a distinct lack of modernity and daring and was tiring the press and the buyers. For this collection, the designer chose the splendid setting of the Ritz swimming pool, which also gave its name to the collection. For the event, he invited some 20 seamstresses to his atelier to work with him on the creation of unique pieces articulated around the corset. The result was a collection of remarkable precision where the unerring sense of detail exalted the creativity. His immediate success earned the designer a permanent haute couture membership that lasted for ten years. 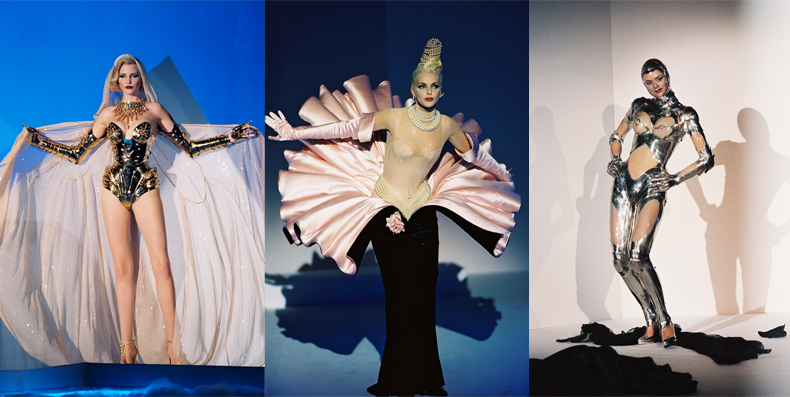 Following the sensational runway show at the Zénith, Thierry Mugler had to celebrate the 20 years of his house in serious style. So, he chose the Cirque d’Hiver for a very complete and highly spectacular anniversary show, revisiting the most impactful figures from all his collections. Among the notable creations were the gynoid robots and the chrome outfits, resulting from an intensive collaboration with Jean-Jacques Urcun on a female android – the first design with made with Delcros for the Superstar Diana Ross collection of 1991. Starting with a metal bra, the outfit gradually became an all-in-one made of metal and plexiglass, an invention that has since inspired countless designers from Alexander McQueen to Dolce & Gabbana. Another memorable piece from this collection was the famous sheath/shell dress which we recently saw being sported by Cardi B at the 2019 Grammy Awards. 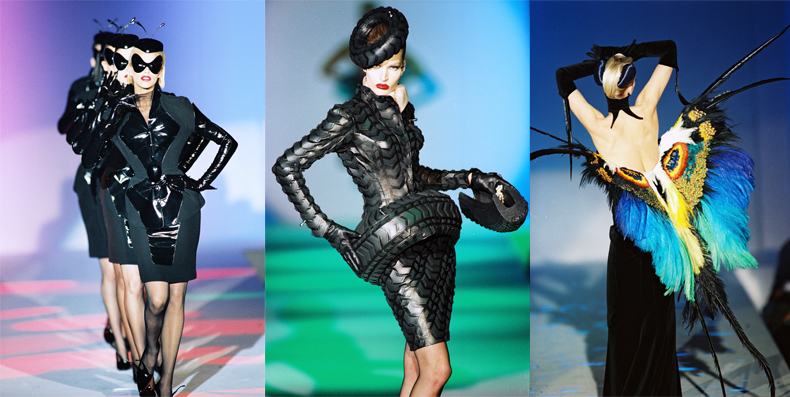 Spring-Summer 1997 haute couture: behind the insect, the woman

If the style and the madness of Mugler were to be illustrated by a single collection, Les Insectes would undoubtedly be the most appropriate. The designer surpassed himself by imagining a world where women were fused with insects, adopting their characteristics on a human scale: carapace, antennae, blacked out glasses like a fly’s eyes and the gracious wings of a butterfly in scintillating colours. Another remarkable piece was the “tyre” suit made of rubber and leather thanks to the designer Abel Villareal - an umpteenth blending of women and cars. With this daring collection, Thierry Mugler continued to surprise and along with the newly arrived John Galliano and Alexander McQueen, contributed to making the spring-summer 1997 collections one of the most exciting haute couture seasons. 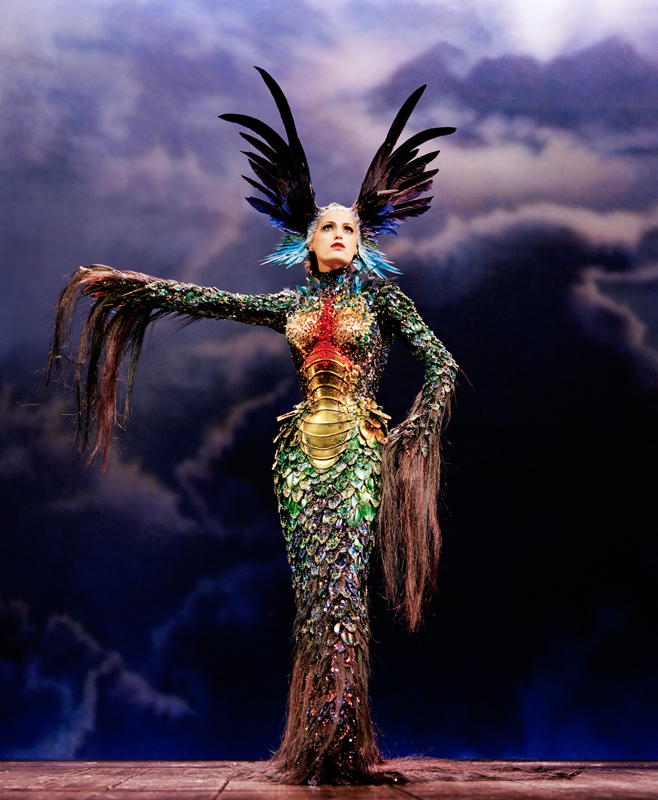 Continuing from the previous collection, Les Chimères transformed the women-insects into fantastical creatures, inhabiting the dreams of the designer. Thierry Mugler translated this imaginary faraway land, with a gaze turned towards the East and its aesthetics. Thus, we find pieces with influences from Russia and Eastern Asia. The absolute highlight of the show was the Chimera dress in which the model Adriana Karembeu became a hybrid creature, a winged mermaid in all the colours of the rainbow. Conceived by Jean-Jacques Urcun and the corset-maker Mr Pearl, this remarkable creation is today estimated to be one of the most expensive haute couture dresses in history. 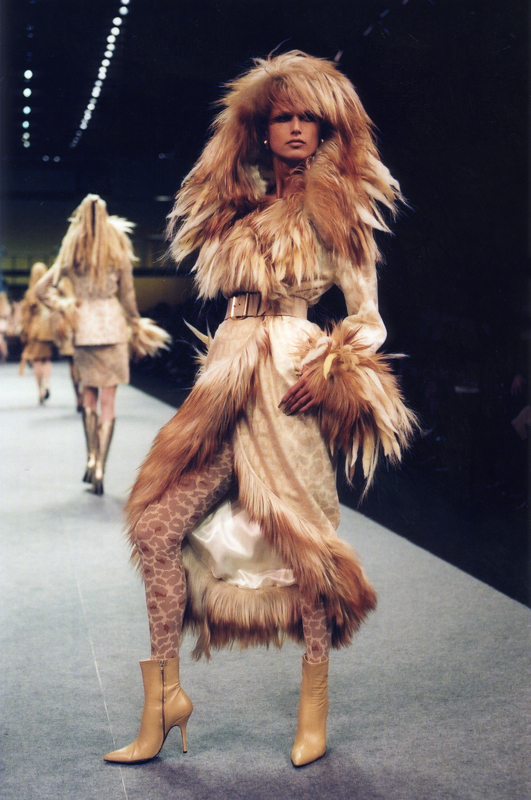 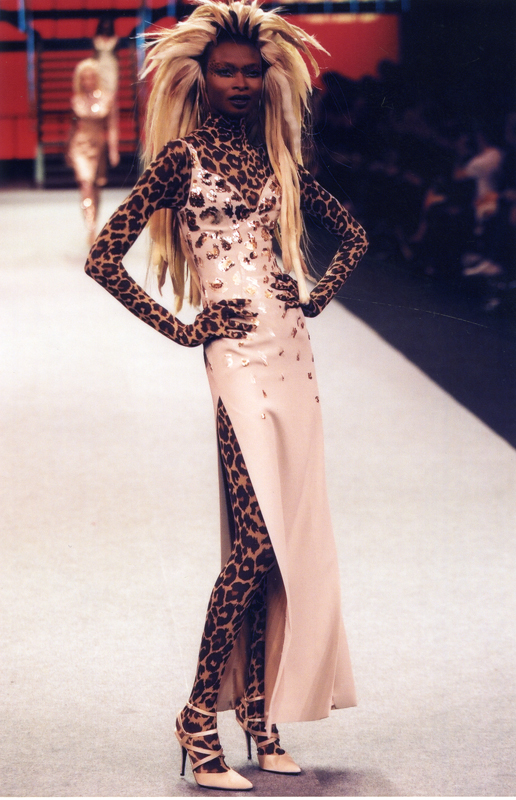 As the 2000’s dawned, fashion faced new competition in the shape of global retailing and fast fashion, which made many fashion labels rethink their economic models. Suffering from this upheaval in buying and an ever-growing demand, Thierry Mugler decided to end his fashion activities. Later, the designer would say: “Fashion was a very emotional and artistic vehicle in the 1970s, 80s and 90s, the look was extremely important. There were real stakes, but it’s not like that anymore. I pushed fashion to its limit, but today creation is limited by money, marketing and the crazy rhythm of the collections.” In March 2001, he showed his last ready-to-wear collection. Baptised Les Fauves, it featured ferocious looking models with wild hair, dressed in white, beige, brown and black leather, swathed in leopard prints. At this dignified conclusion, the designer bade farewell to the fashion world, head held high, eyes firmly focused on new horizons.

The Thierry Mugler : Couturissime exhibition, on display until September 8, 2019 at the Montreal Museum of Fine Arts.

Together with the exhibition, the museum and Phaidon editions are publishing a book dedicated to Thierry Mugler.