The tumultuous career of 6lack

It was after a tumultuous career start that his first album “Free 6lack” finally brought fame to Atlanta rap artist 6lack. Characterized by his understated detachment, the 27-year-old explores a melancholic R&B which, filled with amorous sentiment and openly displaying his vulnerability, is lightyears from the clichés of hyper-virility that are often associated with the genre. 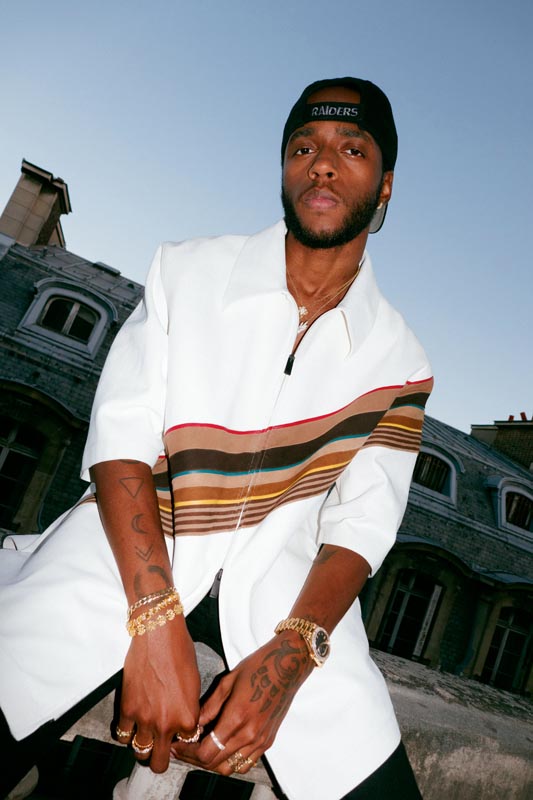 It was in 2016 that the world discovered 6lack, whose name is pronounced “black” and whose figure 6 is a reference to the famous “zone 6” in Atlanta, cited by countless rappers in their tracks. Although he was born in Baltimore (in 1992), it was in the state capital of Georgia that Ricardo Valdez Valentine (his real name) was reborn in a musical baptism that would forge his identity. Since that first 2016 album, Free 6lack, all his innovative and highly sensitive R&B songs can be said to add up to a long love letter to the city where he came of age.

His life in Atlanta began much like that of many young AfricanAmericans. “In my earliest memories of Atlanta, we were living near Memorial Drive and I didn’t have to worry because my mom took care of everything. We lived in a dirty housing block, but I didn’t know anything different and I was a child, so I simply spent my time running around outside until nightfall. I lived like that for ten years. Growing up in Atlanta in that neighbourhood taught me that a bad decision can have big consequences. I learnt through experience, as I lost friends and let myself get caught up in street trouble. But once you take control of your life and stop following others, good things can happen. I had a gift, and Atlanta gave me a story.”

In a city that constantly produces new talent, and whose musical output, which currently dominates the charts, is worth billions of dollars, the young Ricardo fell into the music business at a precocious age. Influenced by his peers, he first tried his hand at rap. “Music became part of my life the moment I was able to write my first lyrics, which was around the age of 6 or 7. Then I continued, just for fun, and for the competition, because I took part in rap battles, until I was about 12 or 13 when I started recording my own tracks in a studio. From high school on I knew I was going to make a career in music. I never slowed down or gave up, I’ve never done anything else. I just had a job for two weeks and I spent a year at university before dropping out of my studies.”

Fans of hip-hop and 6lack are thrilled to see videos circulating on the internet that show the adolescent rapper in mid battle with Atlanta heavyweights like cross-dressing ace Young Thug (who was briefly the face of Calvin Klein). With his short hair under a baseball cap, the young 6lack wears a look he’s come back to today, and delivers his words with an aloof composure that has now become his trademark. But when Free 6lack came out, he sported a thick shock of dreadlocks held in place with a bandana, which gave him the false air of a contemporary anti-Jimi Hendrix, deploying his lassitude and weariness where the guitar hero always seemed to be buoyed by hope. Featuring the singles Ex Calling and Prblms, the album laid out the basis of a personal and highly understated style with, in the place of rap, an almost minimalist half-sung-half-spoken phrasing which took him down the road towards a soul-inflected R&B.

Among his many influences, he often cites Sade, as well as TheDream, a figure from the previous generation of Atlanta musicians. But 6lack’s singing departs radically from the latter’s style, not to say from the whole male R&B genre which is usually a question of vocal prowess and virtuoso lyrical flights promising sexual ecstasy or eternal love. Peers who he admires include the Californian Frank Ocean, the first R&B singer to come out as gay, whose soft soaring tracks have radically renewed the genre. Of his first love for rap, 6lack has kept a desire to remain firmly anchored in the real, close to his emotions, displaying his vulnerability and his sweet melancholy, lightyears away from the flamboyance of R&B’s slick love machines.

This insistence on painting his own portrait with total honesty produces tracks with a strong power of identification, such as the single Ex Calling which is sung in chorus by the whole crowd at his concerts. Humorously evoking 6lack’s panic in the face of an ex’s insistent phone calls – a sudden rekindling of interest that he supposes is motivated by his burgeoning music career –, the song embodies several recurrent themes that have become leitmotifs and obsessions in his work. Among them is the fleetingness of harmony in relationships, the misunderstandings and divergences between men and women, the pitfalls of celebrity and the melancholy that arises simply from the difficulty of loving in an America that is so radically divided, violent and obsessed by material values.

As its name suggests, Free 6lack also includes a strong claim for freedom born from having been burned by the music industry and its fallacious promises. After giving up his university studies for good, he signed a contract that took him to Miami, where his dreams turned into a nightmare. His producers wanted him to make highly formatted hits, mass-produced according to tried-and-tested formulae. Contractually unable to free himself from his obligations, he set himself on a path of passive resistance, receiving no money and even sometimes sleeping rough.

He’s often recounted since then how, not having eaten for several days, he was about to grab a sandwich that someone had just thrown into a trash can when he thought, “This journey of mine had really better be worth it.” Finally signed at Interscope and freed from his legal chains, 6lack recorded his first album in just a couple of months, holed up in an L.A. studio with his producers. It went on to be nominated for the prestigious Grammy Awards in 2017, in the category “best urban contemporary album.”

A year later, in 2018, 6lack stepped back into the limelight with the album East Atlanta Love Letter. Now liberated from all trace of his misadventures, his voice is even more sensitive than before, accompanied by subtle melodies and production values that oscillate between intimate piano-voice moments, guitar- and violin-saturated arrangements and soaring electro sounds. His look has also sharpened, and the photos released with the album – strongly marked by his recent fatherhood – show 6lack standing in the kitchen with his daughter in a baby carrier.

Despite its joyful promise, the title track of East Atlanta Love Letter and the video that accompany it are positively elegiac. Accompanied by Future – an Atlanta star who is a magnificent hero of a masculinity, at once virile and sensitive – 6lack tells the story of several couples in the city while a sort of collective funeral wake is held outside by a whole crowd carrying flickering candles. “It’s a East Atlanta love letter/ Who gon’ love better?/ Nobody, because I say so, and my words hit like a draco.”

On the track Disconnect, 6lack takes on a tone that is more intimate than ever to talk about misunderstandings between a couple; the lyrics to the more upbeat Switch give hope for the possibility of self-reinvention; while his partnership with J. Cole on Pretty Little Fears has earned him a new Grammy nomination. Finally, Thugger’s Interlude evokes the rapper Young Thug, affirming 6lack’s attachment and loyalty to the local scene in which he débuted, that of rap and trap music, even if today he’s moved on to different sounds. Besides the shifting sands of love, the album celebrates Atlanta’s hip-hop community, which it presents as an indestructible fraternity. “In Atlanta, the spirit of music is free,” concludes 6lack. “It’s constantly changing and leaves room for anyone who is creative and passionate.”