At a time when technical innovations are terrifying the world, Venezuelan producer Arca anticipates the music of tomorrow with “@@@@@”, an infernal and anxious electronic symphony. Lasting 62 minutes, the collaborator of Björk and Kanye West, has reconsidered concrete music as she unveils a project that sounds like a pirate broadcast with a message that is as dense as it is hermetic. 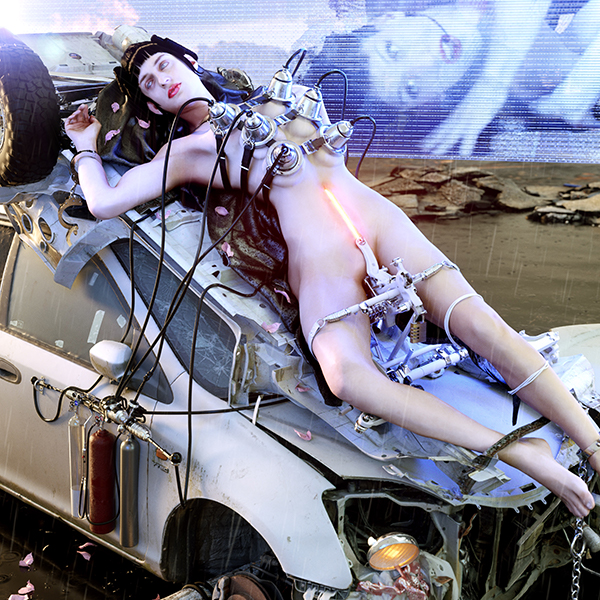 Be aware, you’ll probably have to force yourself to reach the 62nd and final minute of the new Arca track. Entitled “@@@@@”, this provocative and anachronistic symphony questions both the form of a musical piece and the function of an electronic work. Here, the sensation - from discomfort to ecstasy - annihilates the narration. Or maybe it's the other way around... Breathing, laughing, crackling, saturated kicks, breathing, sobbing, orgasms, feedback, rumblings and lamentations... Arca sculpts noises, alters textures, assembles sounds and silences. And from this sonic chaos arises a question: is a musical work supposed to provide pleasure?

A distant echo of the mixtape “&&&&&” (2013) and the first track since the incredible opus Arca(2017), this mysterious “long single” could be the soundtrack for the world of tomorrow. Indeed, the Venezuelan producer defines her work as: “a transmission broadcast in this world from a fictional speculative universe in which the fundamentally analogue format of pirate FM radio remains one of the few ways to escape the authoritarian surveillance set in motion by a conscience taken hostage and in gestation by a post-singularity. ” In this fictional universe, bodies become hosts that house an "experimental diva" born of the artist’s imagination. Like her music, these bodies have no gender. They’re anyone, anything, anytime.

Like a sort of encrypted message addressed to a small anonymous group, “@@@@@” transposes the concept of paralanguage into sounds. In other words, it uses all the means of communication that naturally strengthen human speech. Arca is chatty but never verbose in her electronic speech. Constructed like a game of exquisite corpse, this demonic concerto leads the machine and the individual into a dialogue, the human voice and an electronic howling, as if the android creature were the irreversible Nemesis of Man. An orchestral conductor closer to a cyborg than a peaceful Arcadian, Arca fetishizes programmed disorder and handles clusters like no one, as her clusters of modulations often result in a distinctly nightmarish atmosphere... Occasionally timid violins chisel into this opaque electronic hell. Occasionally the Venezuelan’s falsetto voice absorbs the tumult before turning into a heart-rending gasp. When we least expect it, tortured by bursts of sound, we are surprised and confused to experience what can only be described as… pleasure.

Is an experimental sound work ever a musical work? The exploded polyphony of "@@@@@" layers notes, builds chords and coherently connects them together. But (too) rarely. For 62 minutes, Arca works on disconcerting the listener's ear, on disengaging it from all that is familiar until any musical prejudices implode. We start to appreciate what we wanted to reject, or at least to expect nothing more. The melody in the sense of a “recognisable and pleasant musical suite” disappears altogether. This combinatorial, hybrid and fabricated music is determined by the simple fact of ... being listened to. In this sense Arca seems to be re-examining the concrete music of Pierre Henry and Pierre Schaeffer, a 1960s acoustic experiment that prefigured contemporary electro.

3. The music of tomorrow?

Alejandro Ghersi – her real name – arrived on the avant-garde music scene in 2012 with her mixtape Baron Libre. Other works soon followed, including the album Xen (2014), Mutant, a year later, and the famous Arca, of 2017. Aged 31, Arca is perfectly at home on all registers and brings her own brutality to the crystalline creations of Björk, has collaborated with Kelela, Frank Ocean and FKA twigs, and composes for Kanye West, who refuses to surround himself with rappers. Her strength? Injecting elements of scholarly music into contemporary productions, mixing the codes of opera with the devastating electronic productions of a SOPHIE, philharmonic orchestrations with the minimalist drone of a Oneohtrix Point Never. In short, an exploration of urges, a hyper-sexualisation that is never prosaic and a sovereign randomness that governs most of her compositions.

With “@@@@@”, Arca goes even further and shapes what might be everyday music in 200 years. An abstract, occult, dark and often unintelligible work in which the concept devours the form. On the cover created especially for the song, an inanimate mannequin lies on the bonnet of a gutted car. Her chest has six breasts, each connected to the automobile by a cable, as if the doll was feeding the machine. Or maybe it’s the other way around… Similar to the first minute of Arca’s track, the expressionless face of the android evokes nothing. We don't know where it came from or who it is. Is it a puppet or a defunct robot. A boy or a girl. Not that that matters, after all robots have no gender...