With his inimitable look and solar charisma, he embodies the archetypal rock star, on whom time has no empire. A one-man band capable of playing all his own instruments, Lenny Kravitz is back with a new album, “Raise Vibration”, a groovy and militant manifesto, the eleventh opus in his career. Weaving gospel and Native American chants into his rhythms, in homage to his black and part-Cherokee roots, Kravitz also celebrates figures such as Johnny Cash and Michael Jackson on this vibrant and intimate disc. Numéro caught up with him af ter his stomping Paris concert this June. 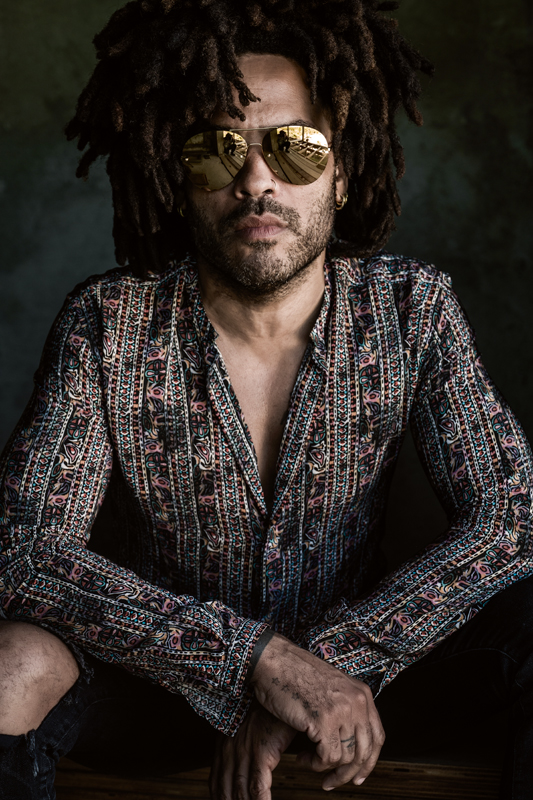 A mane of dreadlocks, a blackleather jacket, dark glasses and pistachios within arm’s reach… On this grey Parisian morning, Lenny Kravitz is playing the perfect star. At 54, he doesn’t at all look his age, has lost none of his sex-appeal, knows it, and apparently enjoys a self confidence made of steel. A self confidence that’s just as solid as the tracks on his new album, Raise Vibration, which is his best in a long while. If the general mood is still rock ’n’ roll, the 12 tracks are imbued with a contagious groove that mixes tribal echoes, funk, pop tinged with folk, and rocked-up gospel. It’s a risky but ultimately successful melting pot, which comes off thanks to Kravitz’s inimitable timbre and a renewal of inspiration that suits him well as it plunges into the roots of Afro-American culture. Those who wrote him off as forever stuck in an overly flashy FM rock rut will be revising their judgment… A talented songwriter and multi-instrument player, Kravitz is also a superb stage performer – something he proves each time he goes on tour, with concerts that are a moment of visually astonishing collective symbiosis which are impossible to resist. His most recent Parisian performance, in June at the AccorHotels Arena, was spectacular in its generosity: not the type to disdain his old hits, he gave his all on every track, played his stage effects for maximum impact, sang full throttle all the way through and added some welljudged covers into the mix (Bob Marley’s Get Up, Stand Up) – a true lesson in entertainment.

NUMÉRO: Your most recent Paris concert in June was an extraordinary stage show, without the slightest slackening of pace. Where do you find your energy?

LENNY KRAVITZ: In the music. It transports me. The audience’s energy too. I’m lucky that they’ve always shown me unfailing love. Perhaps because that’s what my music is about – it’s very positive. People come to find a feeling of unity, of togetherness. Even if they don’t know each other beforehand, they all get along famously during my show.

How did your new album Raise Vibration come about?

Very spontaneously. I had no idea what I should do – the style, the subjects, the ambience… I just left myself open to inspiration, whatever was going to come. No filter; raw. It came to me in dreams. I dreamt at night, extraordinary oneiric stories, but also more concrete ones concerning my own life and the world around us. It’s what brings a very visual aspect to these new songs. Given that on the disc I was playing all the instruments, I got my longtime guitarist, Craig Ross, to produce it, and the result is incredible. We recorded it in my studio in the Bahamas, behind closed doors, with no distractions other than nature. It’s a good set-up for creation…

Reassure us, nonetheless – New York is still your favourite town?

Absolutely. My heart belongs to New York. I was born there, I grew up there, it’s where I honed my sense of rhy thm and colour, and where I learnt from others.

Was there one instrument in particular that seemed crucial to you on this album?

I really liked the percussion, the congas in particular. When I started out I played all the instruments because I couldn’t afford to pay the musicians I wanted, and in the end it became totally natural. Going from one instrument to the next is completely fluid for me, almost therapeutic.

“It’s difficult not to feel concerned by what’s going on at the moment. Ten years ago I couldn’t have written this album. Our times are really dark, disturbed, frightening. In 2018 people are still going to war, racism and misogyny still exist.”

With titles like It’s Enough, which calls out the violence to which Afro Americans are subjected, would you say this is a militant album?

It’s difficult not to feel concerned by what’s going on at the moment. Ten years ago I couldn’t have written this album. Our times are really dark, disturbed, frightening. In 2018 people are still going to war, racism and misogyny still exist, it’s intolerable. And yet – and I don’t know if it’s a good thing or not – I’ve always been an optimist. I work on the assumption that man can change. Meanwhile, there are so many things that need doing on this planet and we have less and less time. Particularly where the environment is concerned. The least I can do is talk about it, react in my own way, heighten awareness among those who listen to me…

With tracks that last over four minutes, you eschew the usual pop format on this disc. Was this deliberate?

Yes. The tracks on Raise Vibration are not one-dimensional like so much music today, they take the time they need. They weren’t calibrated for radio or for audiences in a hurry. Technology is great, but the fact that some people only listen to 40 seconds of a song before moving on to something else seems to me to be incompatible with the most basic idea of musicality. Moreover, Raise Vibration is best listened to on vinyl.

Gospel is part of my roots. And if I mix gospel and rock ’n’ roll, it’s because both are about bringing people together as well as about being sincere. I grew up to the gospel sound of the 1950s, which my mother loved. It has a completely unique social power and an extraordinary emotion that we’ve never equalled since.

It seems that your mother was very important in your life, not only from a family point of view, but also artistically.

Yes, she listened to jazz, Aretha Franklin, Gladys Knight, Stevie Wonder, Curtis Mayfield – and I have to say that Superfly is still one of my favourite albums of all time. My mother was also a woman who displayed enormous strength of character, loyalty, honour and devotion. And it’s thanks to her, and all those who helped bring me up, like my aunt and my godmother, that I’m sensitive to the feminist cause.

And what about your father? What role did he play?

He brought me a lot too: a taste for work, humility, a thirst for discovering other sounds…

“The richness of my origins – European, American, African – is a gift from heaven. I always try to honour them, even if it’s often an unconscious thing when I’m composing.”​ 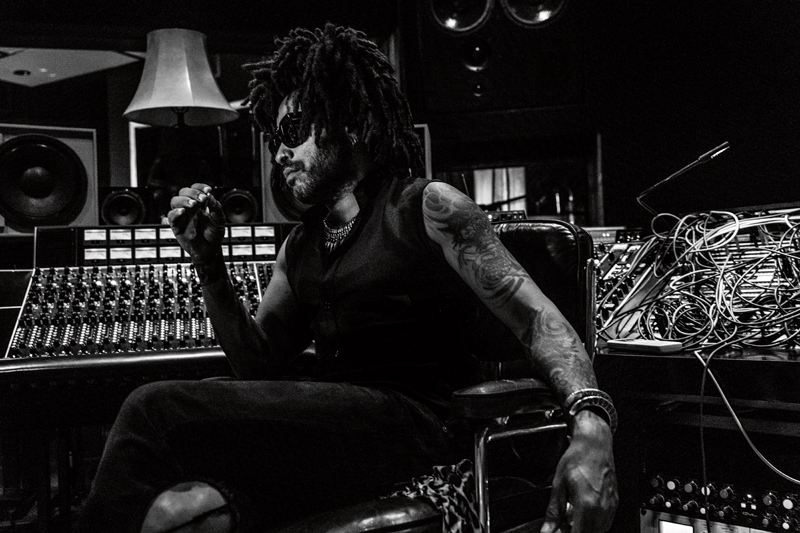 What made you use Native American chants in the title track Raise Vibration?

These chants have always touched me, because the history and culture of Native Americans are intimately linked to those of the U.S. There again it’s about my roots: my great grandmother was Cherokee. The richness of my origins – European, American, African – is a gift from heaven. I always try to honour them, even if it’s often an unconscious thing when I’m composing.

Which artists made you want to get up on stage?

Firstly the Jackson 5, my very first concert when I was 6 years old, in Union Square! My father took me, and I was totally amazed. The groove, the melody, the tenderness, their truly impressive professionalism. The following year, I went with my mother to see James Brown at the Apollo Theater. That was… explosive!

What's more we get to hear Michael Jackson on the track Low! How? And why?

I produced the track Another Day for him, which features on an album that came out after his death – it’s not very good unfortunately… Anyway, I found voice recordings that matched perfectly with Low, a track I would have loved to give Michael if he were still alive. And I didn’t use his singing as a sample but as a real performance.

Johnny Cash also appears on the album, although more indirectly: his name is the title of a track in which you sing about the day your mother died.

That day I met June Carter and Johnny Cash, who were a couple, in Rick Rubin’s house in L.A. [Rick Rubin was the producer, among others, of Cash, the Beastie Boys, Red Hot Chili Peppers and Adele.] I was in shock and told them the news, because I didn’t know who else to tell right then – I was alone. And there was a surreal moment where they took me in their arms to comfort me. What I felt right then is what I recount in this song.

“I’ve learnt from my many mistakes, which brought me where I am today. I’ve changed in a good way – I’m serene. Music has helped me get through difficult times, has picked me up in sorrow and disillusion.​”

Is there a historical period you would have liked to live through?

I would have loved to be 20 in the 1960s. I think I would have had a lot of fun experimenting with everything that changed society at the time: music, art, politics maybe…

Your first album, Let Love Rule, will turn 30 in 2019. What do you feel looking back at your career and your success?

That I’m a lucky man who hasn’t noticed the time passing. Back then, the simple fact of releasing a record was just huge! I never thought I would last so long. Of course that’s what I wanted, but without being conscious of it. Since then, everything’s just happened without any real strategy, and it’s made me happy. Even if nothing is perfect. I’m not the same age today, but that doesn’t frighten me, it’s the way life goes…

Do you have any regrets?

None. I’ve learnt from my many mistakes, which brought me where I am today, and I feel happy. I’ve changed, in a good way I think – I’m serene. Music has helped me get through difficult times, has picked me up in sorrow and disillusion. It’s also allowed me to live through some exceptionally wonderful moments.

What are you proudest of?

My daughter Zoë. She’s kind, beautiful, talented – a truly beautiful person. Even if she weren’t my daughter, I’d want to be her friend!

Do you have a mantra?

Let Love Rule, forever and always. Love is our greatest strength on earth; only love can bring us peace and happiness.