Since her début ten years ago, she’s forged her own highly idiosyncratic fusion of pop and R’n’B, which is back in all its stomping danceability on her latest opus, “Dirty Computer”. Abandoning her retro-futurist references, the singer, actress and activist delivers a powerful message of liberty and emancipation. 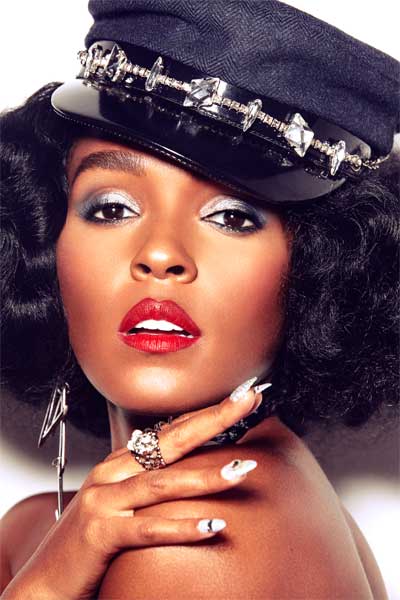 Just ten years ago, Janelle Monáe roared onto the music scene with Metropolis: The Chase Suite, an ambitious and whimsical mini-album sponsored by Big Boi, one half of the Atlanta duo OutKast, and Sean “Diddy” Combs, alias Puff Daddy, a king- and queen-maker in the world Portrait JANELLE MONÁE Since her début ten years ago, she’s forged her own highly idiosyncratic fusion of pop and R’n’B, which is back in all its stomping danceability on her latest opus, Dirty Computer. Abandoning her retro-futurist references, the singer, actress and activist delivers a powerful message of liberty and emancipation. of hip-hop and R ’n’ B back then. Despite this royal baptism and blessing, the young singer from Kansas City had trouble finding her place in the sun in the face of competition from those limelight stealers Rihanna and Beyoncé. Her retro-futurist character – somewhere between a 1920s cabaret star and a bionic superwoman – her references to Fritz Lang’s film Metropolis and the epic power of her music placed her outside mainstream codes but without necessarily making of her a kooky heroine. The world was not yet ready for an insolent youngster who quoted Philip K. Dick, Josephine Baker and Claude Debussy and who claimed that her name came from Claude Monet (in fact she was born Janelle Robinson), who, she liked to joke in interviews, had originally been Claude Monáe but had changed his name to MonET for “Extra-Terrestrial.” It’s probably not for nothing if Dorothy from The Wizard of Oz was also from Kansas…

A decade later and she’d (only) released two other, more conventionally pitched albums, but her status as an outsider had barely evolved, despite yet more accolades from the likes of Prince or Nile Rodgers, who saw in her a worthy and talented heir to the eternal marriage between pop and soul. Mr. P.R. Nelson is no longer here to see it, but it’s possible that Monáe might finally make it to the top with Dirty Computer, her fourth album, which is stuffed with hits, among them a barely disguised homage to the Purple One’s Kiss titled Make Me Feel. Not only does she share with Prince her bonsai height (1.52 m), she also has a taste for the craziest musical hybrids and mutations, transgressing genres – and not just music genres – as though the whole history of pop culture were a magic hive in which she’d chosen to make her honey. Opening the album, the title track features Beach Boys-style vocals and Brian Wilson himself as guest star. There’s also an interlude entitled Stevie’s Dream in which Mr. Wonder discusses the word “love” during a conversation with Monáe, who he has invited to perform alongside him on several occasions. Other, more contemporary, heavyweight guests include Pharrell Williams, Grimes and Zoë Kravitz, so much is Monáe the only star today able to make such an intergenerational leap without risking accusations of gratuitous name-dropping.

In the spectacular video for Pynk, Monáe and her dancers sport “vagina pants” by Dutch designer Duran Lantink, a humorous accompaniment to lyrics that speak upfront about female intimacy. This celebration of pussy power in a country whose president boasted of grabbing them by it transgresses more than one taboo.

Indeed for various rather troubling reasons we might even say that now, in 2018, Monáe is the ultimate incarnation of an American artist, a figure in whom the most acute issues of the day somehow crystallize but whose ultra-aggressive militantism doesn’t thwart either her capacity to entertain or her whimsical effervescence. In 2015, at the forefront of the Black Lives Matter movement, she released the track Hell You Talmbout which named black victims of police violence, and followed it up with an instrumental version so that everyone could add names to the list and turn it into a sort of viral banner. Long before the salutary disclosures of #Time’sUp and #MeToo she founded a movement called Fem The Future which aimed to get women’s voices heard in a music industry whose penchants were decidedly patriarchal. In the spectacular video for Pynk, Monáe and her dancers sport “vagina pants” by Dutch designer Duran Lantink, a humorous accompaniment to lyrics that speak upfront about female intimacy. This celebration of pussy power in a country whose president boasted of grabbing them by it transgresses more than one taboo when it shows Westworld actress Tessa Thompson emerging from Monáe’s vagina. Moreover it’s said that the two are lovers, and without either confirming or denying the rumour, the woman who up till now claimed only to date androids has got Google all atwitter on the eve of Dirty Computer’s release by coming out as pansexual, substantiating her statement in a Rolling Stone interview that “being a queer black woman in America – someone who has been in relationships with both men and women – I consider myself to be a free-ass motherfucker.”

For the most backward among her huge Baptist family in Kansas, gays were going straight to hell. Her crack-addict father left when she was barely a year old, while her mother voluntarily subverted the overly pious by initiating her at a young age into the joys of science fiction, a frequent escape route in Afro-American culture – from Sun Ra to Funkadelic – to get around racial, religious or sexual issues. In the cultural galaxy of this Afro-futurism, Janelle soon became a rising star by creating an avatar called Cindi Mayweather whose messianic odyssey was recounted in her first true album, The ArchAndroid (2010), which telepor ted the world of Metropolis into that of The Matrix, all the while conveying a subtext about the relations between the dominant and the dominated that hasn’t changed much from the beginning of one century to another. Now based in Atlanta, Monáe founded the Wondaland Arts Society on the model of Paisley Park – a sort of parallel artistic republic of which she is the figurehead – with the joint desire of openness towards others and total control over her business. When, in 2013, her album The Electric Lady came out (a nod, of course, to another icon, Jimi Hendrix), reality had surpassed science fiction: there was a black president in the White House and transhumanism was no longer just the dystopian fantasy of writers and filmmakers. Janelle’s message was less forceful and the album itself less innovative, to the point where people began to fear that she would end up losing herself in her own eccentric game of references, which included Polly Maggoo on the cover. For at the same time other transgenic creatures such as Lady Gaga, Nicki Minaj or even Lana Del Rey were gobbling up her market share (on the moon). It took five long years for Monáe to update her software and make a successful comeback with Dirty Computer. But she had also become an actress in the meantime, taking on characters she didn’t invent, such as the fiancée of the hero’s dealer mentor in Moonlight, or a black NASA mathematician in Hidden Figures. Monáe’s next film will be Robert Zemeckis’s The Women of Marwen, out this November.

But as much as Obama’s election seemed to have the effect of calming her fire, Donald Trump’s has awoken all the tumultuous anger smouldering inside this sizzling cyber-suffragette. With its pearlized production values – more regulated and meticulous than her previous albums, to the point where at times it comes close to Katy Perry-style insignificance – Dirty Computer is a contagious virus chucked into the ultra-codified system of the global mainstream music industry. With her child-woman face reminiscent of Whitney Houston, her retro pompadour à la Little Richard or, depending on the day, her Afro bunches which make her look like Minnie Mouse, Janelle demonstrates the art of fooling her world – the strategy of an android. If almost every song includes a progressist subtext with respect to questions of gender or race, it’s the final track, titled simply Americans, which deals the ultimate blow to the Trump administration and its nexus of white supremacists. Once again, Janelle dons a mask, the song starting out with a mushy gospel choir before trotting on like an inoffensive pop ’n’ roll jig. But it’s the lyrics, an inventory of the air-conditioned nightmare that is the America dreamed of by the NRA and the Tea Party, that acts as a stealth bomb, especially when Monáe contrasts the conservative world of weapons and stay-at-home mothers with all the beauty and joy of her “free-ass motherfucker” emancipation. To accompany the release of a disc that has all the attributes of a musical blockbuster, Monáe has decided to think big by producing a 45-minute film called Emotion Picture, which contextualizes all the videos up till now released in a futurist fiction where individuals have become “dirty computers.” It’s a Metropolis for the digital age, which closes the loop with her beginnings and presages greater things to come from the sexiest and most brilliant android in the universe.