Long a devotee of 3D animation, the Swiss artist has made himself a reputation as a sculptor and painter with his highly coloured and deceptively naive figurative works. 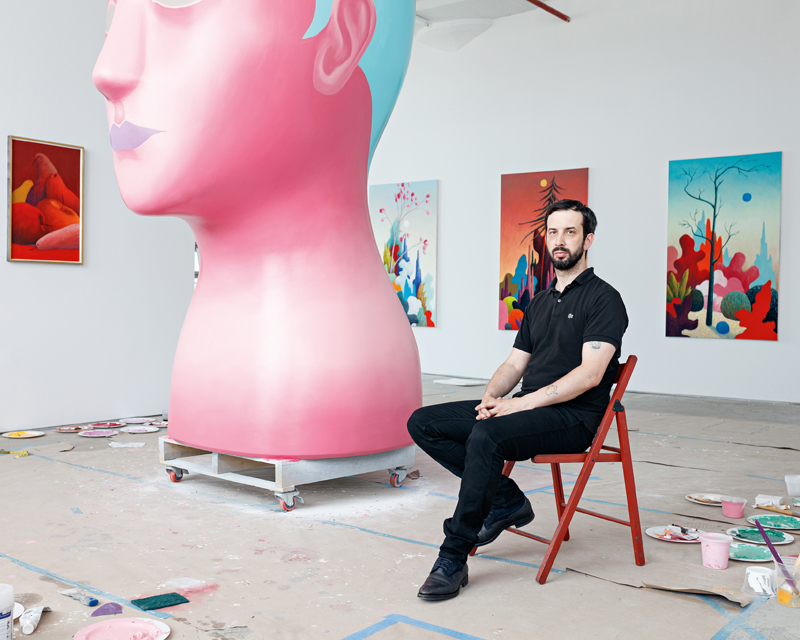 Nicolas Party, who’s not yet even 40, reminds us that the artworks which mark us are never those we imagined. On the contrary, those that leave a trace do nothing to reassure our aesthetic convictions, but instead lead us a little bit further forward in the history of form. Party’s show at Glasgow’s Modern Institute this summer proved this once again, ahead of upcoming exhibitions at Brussels’s Xavier Hufkens in November and L.A.’s Hauser & Wirth next February. An unexpected record at auction this spring was perhaps the crowning moment in the rapid ascent of an artist who makes no concessions to mainstream taste, risking everything for freedom and his “deviant” intuitions.

Screaming colours, unabashed gradations, unbridled ornamentalism, over-the-top decorativeness, the figurative pushed to the heights of naivety with kittens, fruit and teapots, faces like Fayum mummy portraits that have been violently solarized – yes indeed, Nicolas Party does not do what it supposedly takes to gain the interest of a discipline that is now far more interested in conformity than incongruity. Landscape (2015), estimated by Phillips at $100,000 to $150,000, went for $608,000, six times the lowest estimate, a record in terms of wrong forecasting, even though there had been precedents: in 2018, Sunset (2018), was estimated at $60,000 but went for $330,000.

Nicolas Party wants to design his exhibitions as a patient work of layering that defies rapid consumption, a unique and unexpected universe whose influences range from Egyptian sarcophagi to Félix Vallotton, René Magritte and Giorgio Morandi.

His show this summer at Glasgow’s Modern Institute was titled Polychrome, which indeed it was, with its bright-yellow walls and architectural pedestals in red and violet carrying body fragments: a green foot, a violet bust, a blue finger, alongside pastel-on-canvas works showing strange characters that seemed to marvel at being surrounded by butterflies. Party divided the space into several rooms linked together by little arched doorways, designing his show as an experience that surpassed the academic exercise of showing objects for sale. It’s putting it mildly to say that you enter a “world” which the artist devised himself and which he likes to make complex, drowning the viewer in a flood of visual information that forbids a simple interpretation (in other words he takes us seriously). While he quotes Gauguin (“I only want to make simple art”), he also says he wants to design his exhibitions as a patient work of layering that defies rapid consumption, a unique and unexpected universe whose influences range from Egyptian sarcophagi to Félix Vallotton, René Magritte and Giorgio Morandi. 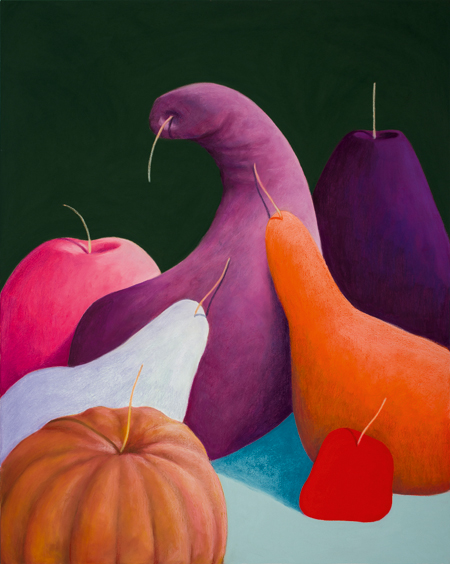 It was in Glasgow, again at the Modern Institute, that Party put on one of his first solo shows, about ten years ago. Born in Switzerland, he studied film and graphic design at the École cantonale d’art de Lausanne (ÉCAL) before studying visual art at the Glasgow School of Art. Artists’ inaugural shows often take place close to where they live or come from, and Party exhibited first at Lausanne’s La Placette and then in Glasgow, where his show Dinner for 24 Elephants was initially unveiled in the form of a 24-person dinner, on 2 September 2011. “When you’re a young artist, you keep hearing about the idea of networking: making connections in order to be successful. And you keep hearing about art dinners, where a lot of this networking happens. Making decisions around a dinner is an old ritual – from the Bible to the G7. Sharing food while making decisions is an important tradition. Dinner for 24 Elephants was basically a set for an artists’ dinner. Instead of going to the dinner after the opening, the show itself was the dinner,” as he explained to art critic Rita Vitorelli. Party designed the plates, the tables and 24 stools in the form of little elephants; he also concocted the menu of seven dishes, among which were a single little oyster, a sausage, a fish and a poached pear – motifs that are often found in his paintings. Guests were chosen by the two directors of the gallery who, accompanied by the artist himself, served the food.

“We’re so used to seeing computer-generated images now that it has a big impact on how we see all images.”

Party is often labelled a “post-internet artist,” which is strange for someone who uses the rather late-18th-century technique of pastel. Perhaps what people mean is the novelty of his work, at a time when inventing the new is not necessarily a young artist’s first preoccupation. “We’re so used to seeing computer-generated images now that it has a big impact on how we see all images,” he muses. “Technical inventions always have an impact on the way we make art. And sometimes it’s something simple, like the invention of the paint tube, which made it possible to go outside to paint. These days we have the computer, the internet and the high-resolution Retina display. We have access to billions of bits of information that we can look at on a very beautiful screen. But it seems our creativity is lagging behind the computers we make. Our eyes haven’t changed their resolution yet. We have the same hands with five fingers that artists used 30,000 years ago to paint animals. The computers we’re making are extremely powerful and their evolution in the last 20 years is truly amazing. But within those last 20 years, humans haven’t changed much. In the world of technology we can use the word ‘progress’ ... But I don’t think you can use it in the cultural world.”

“In 2016, it’s impossible for me to just paint pretty women. It wouldn’t make sense.”

Party spent a decade or so working with 3D animation, and there was probably something of that in the large painted-head sculptures he showed in his 2017 Speakers at Modern Art Oxford, inspired by seven of the town’s female characters and shown with a piano, violin and cello soundtrack. As for the  smaller works he showed in Heads at M. Woods, Beijing (2018): “In my head I’m painting a male because I’m male. And when I think about gender, and what a woman or a man is, I’m only asking from the point of view of a man. Also, the history of portraiture has mainly involved male artists depicting young women. In 2016, it’s impossible for me to just paint pretty women. It wouldn’t make sense. There’s a lot of pretty girls in the street, and you can say, ‘I paint beautiful things so why not beautiful girls? I mean, that’s a good subject, right?’ And, actually, of course, it’s not, because it’s not asking the right questions about what is beautiful and what is a beautiful person or a beautiful face.” 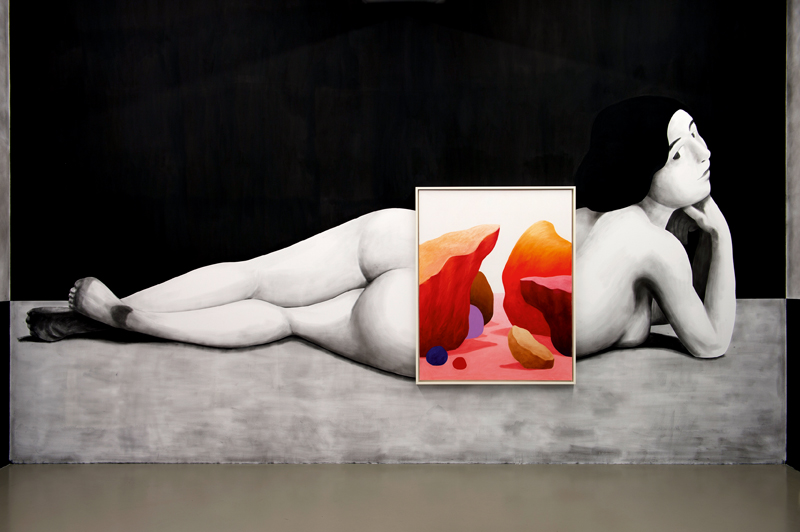