The oeneiric and fantastic sculptures of Jean-Marie Appriou

Inspired by the ancient myths of his native Brittany, sculptor Jean-Marie Appriou has created an oneiric world of animals, plants and characters that stands in refreshing counterpoint to mainstream art today. 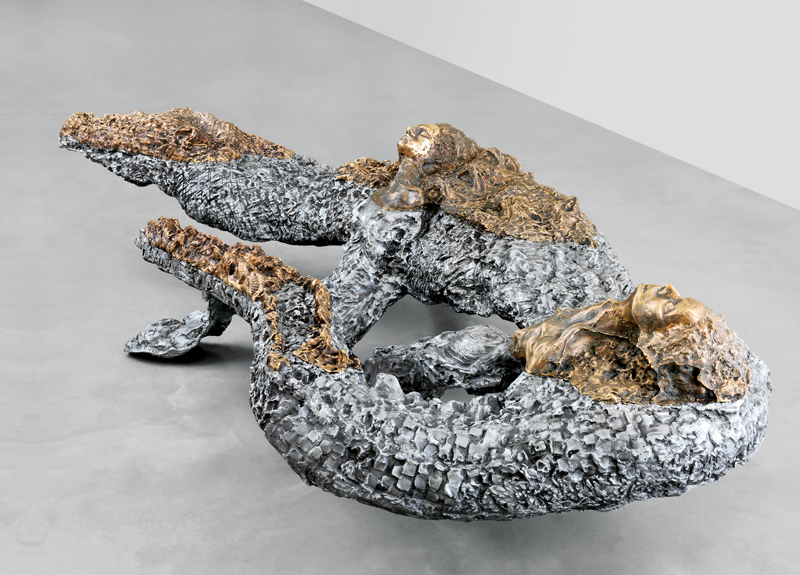 He’s now the first French artist to have joined the much sought-after Galerie Eva Presenhuber (founded 2003), where he finds himself in the company of Joe Bradley, Ugo Rondinone, Trisha Donnelly and Franz West. The first Presenhuber show by this 30-something Breton opened at the beginning of November, while the month previous, in Brussels, he showed at the Clearing gallery (whose New York branch also showed him in 2017), in what was a perfect demonstration of his singularity and knowhow and the very oneiric register of his preoccupations. With his sweetcorn cobs, beekeepers and bestiary of chameleons, snakes and cats, Jean-Marie Appriou offers a fascinating counterpoint to the art of our times.

He was born in Brest in 1986, studied at the school of fine arts in Rennes, and makes no secret of the decisive influence of Daniel Dewar and Grégory Gicquel – for whom he worked as an assistant – on his art. For a long time his workshop was in Plouguerneau, right at the far tip of  Brittany, and it seems to me that understanding his work requires that one not lose sight of this country of myths and legends, of Lancelot brought up by the fairy Viviane, the Lady of the Lake, in the Forest of Brocéliande... It’s an indispensable key to unlocking the complex tales orchestrated by the characters and animals that make up his sculptural world. At a time when young artists often try to master all the disciplines – painting, sculpture, installation, video, etc. – he’s chosen to concentrate on just one – sculpture – but to explore all its techniques. In Zürich he’s showing a new ensemble of aluminium sculptures, one of which is aptly named Crossing the Parallel Worlds. This large piece, entirely in the dull grey of cast aluminium, shows an ensemble of perfectly ripe, life-size, elongated sweetcorn cobs (it’s curiously reminiscent of the large stone crucifixion at the church in Plouguerneau); the exhibition is entitled November and the works on display (maize and sunflowers, among others) seem to be trying to connect us with the time of year and the cycle of the seasons. In the crevices of these maize plants, arranged in volutes, a face appears, with eyes covered with Charon’s obols (in Greek mythology, the mythic ferry- man of the Styx would only transport the souls of the dead once they’d paid him a coin). The ensemble clearly lends itself to narrative inter- pretation, and tells a strange tale supported by a composite iconogra- phy. “The cosmonaut, the beekeeper and the bather are characters with whom I began sculpture. They are bodies to whom, as in theatre, I gave a role to play, and costumes. These characters have been given a script. The child astronaut evokes an uncertain future; he is alone in space. In an early incarnation, the beekeeper who wears the hat of the alchemist from Jodorowsky’s The Holy Mountain is holding a bouquet inhishandasifheweregoingona date, except it’s a date with the last bees who are alive on our planet,”(1) he explained with respect to an earlier series of work. 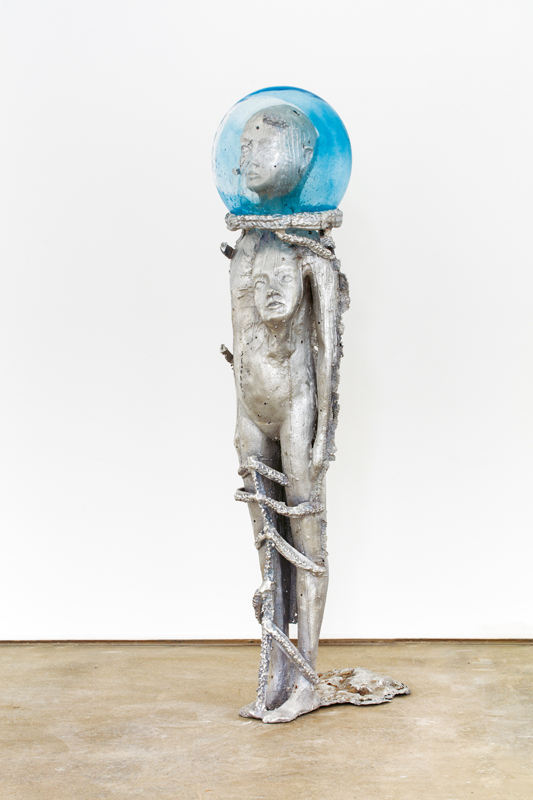 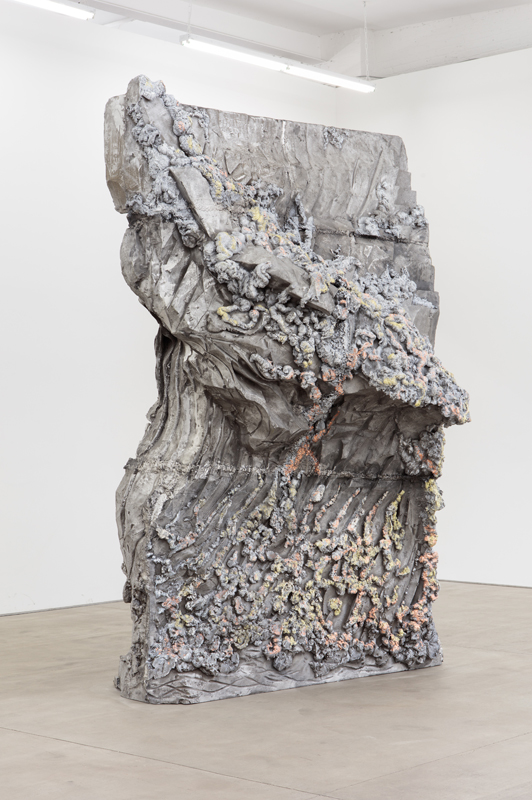 Like the cosmonauts, beekeepers and other “actors” in Appriou’s oeuvre, the corn cobs were realized in cast aluminium, a technique he claims to have learnt by watching amateur YouTube videos shot by “biker hobbyists who like to make belt buckles on Sundays.” It’s true that he likes to learn on his own, and he’s managed to master all sorts of techniques, among them ceramics; he grew up not far from the potter’s kilns used by his father – a sculptor and scenographer, who built sets for theatre and opera – but only began to try his hand at it after leaving art school. He says that he’ll be turning to ceramics once more, now that he’s built a kiln in his workshop that is big enough to fire bas reliefs. He’s also learnt tanning techniques: his first works in leather and ceramic already exhibit a stylistic freedom that contrasts radically with the times. Appriou doesn’t count on perfectly mastering all these tech- niques, and is suspicious of the habits acquired by the craftsmen. “I sculpt all my models to scale in the workshop before they go to the foundry. Then, with my team, we go see the founders and we make them step out of their knowledge. We reconsider what they see as ‘mistakes’ from a technical point of view.” He also counts a lot on the accidents of his autodidactic output, and nothing seems to delight him more than a solid piece of aluminium that has conserved the fingerprints of the original clay model. There’s an epic dimension to the stories bound up in his sculptures, and the particularity of his quest, when you compare it to the art of his peers, is quite delightful. Appriou practices a form of relaxed symbolism – “Enemy of teaching, declamation, false sensibility and objective description, symbolic poetry seeks to clothe the Idea in a perceptible form,” wrote the poet Jean Moréas in his 1886 “Literary Manifesto” – and expresses the strange and the oneiric à la Gustave Moreau. He says himself that his characters have roles to play, stories to carry. Their theatrical dimension should not be neglected either, nor their practice of theatre since, after all, they recount a situation.

His Brussels show, entitled Griffe, langue, rose et écailles (Claw, tongue, rose and scales), featured many of his aluminium characters, this time almost coal black, as though petrified by a volcanic erup- tion. A lyre player and a little tiny chap rubbed shoulders with a besti- ary composed of bats, piranhas, alligators, snakes and felines that seemed even more half-starved than a cat by Brancusi, forming an en- semble that was as inhospitable as it was disturbing – despite the odd rose blooming on the trunks of dead trees. The whole thing evoked a scene of survival, perhaps recount- ing the state of nature after a river had dried up in a far-off country. (If there’s an “ecological” dimension to his oeuvre, it essentially takes the form of a constant celebration of the Earth, its creatures and its seasons.) Some of the animal sculptures were remarkably flat and only seemed to stand up by a miracle, but in fact re- main vertical thanks to their considerable weight. Contrasting with this desolate landscape was another, in a different room, whose walls sported chameleon heads and but- terflies, multi-coloured and realized in glass – this time Appriou worked with a professional glass blower – his sculptures always expressing a sort of enraptured astonishment in the handling of material and techniques. They are, in truth, such strong distil- lations of singularity that they can only delight in the context of a disci- pline that is so often struck by the dead hand of conformity.

Appriou, very naturally it seems, offers the art of our times a liberating counterpoint, emancipating it, for example, from literal commentary of the woes of the world and abscond- ing with it towards a much more po- etic horizon – but one that’s no less connected to the present. For all the epic fables recounted by his sculp- tures and their complex iconography, they seem to take us back to the current moment in the development of the world and the story of man; symbolist, romantic too, his assess- ment of this particular moment is presented to us in the form of a po- tential journey. In his own words: “I like when things are like a William Blake poem. Artists create parallel worlds and allow us to discover them, as poetry has created millions of universes since man became a poet. I don’t have any scientific perception of things, but I like to look at their correspondences, observe them as little keys, or as doors which open new perceptions.” 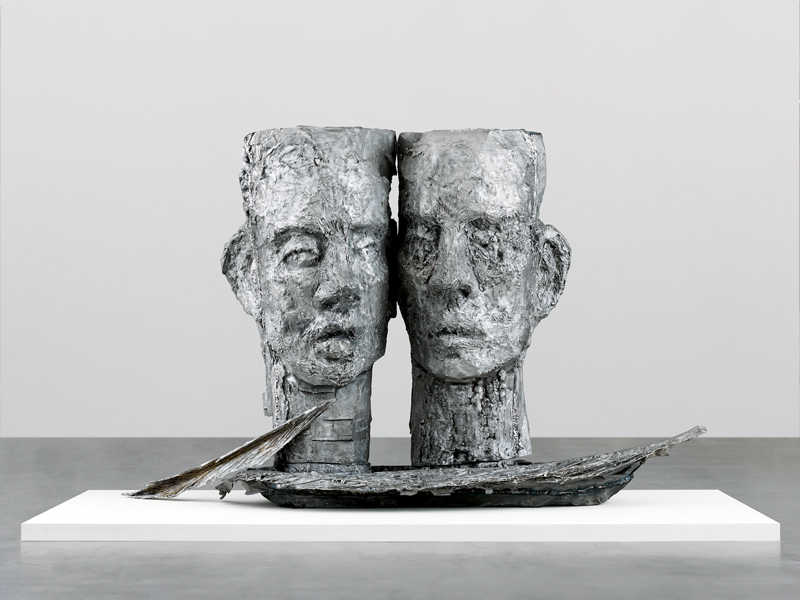 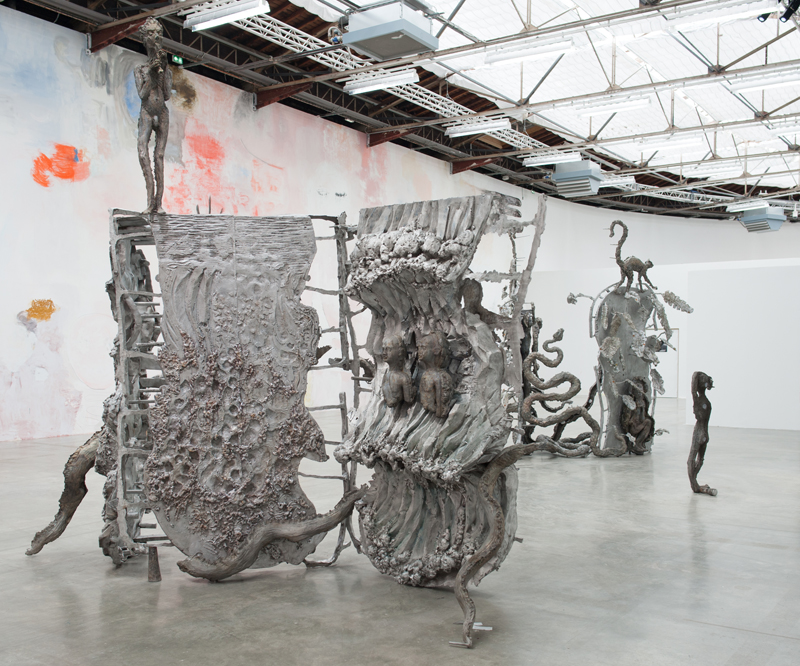