Maria Brito, the woman who whispers in P. Diddy’s ear

Numéro art met up with Maria Brito, the influential art adviser, close to P. Diddy and Gwynteth Paltrow, in her Manhattan apartment.

“Lot number 5A is the Kerry James Marshall, and I’m going to start the bidding at $6 million,” announced auctioneer Oliver Barber at the Sotheby’s contemporary auction last May. The painting in question was Pastime (1997) which depicts African Americans enjoying a picnic in a way that echoes Seurat’s 1886 Un dimanche après-midi à la Grande Jatte and Manet’s 1863 Le Déjeuner sur l’herbe. The bids soared, hammering down at $18.5 million – $21.1 million with fees – breaking the previous record for a living African-American artist. Just two days later, Marshall’s gallerist Jack Shainman announced the buyer on Twitter: “Congratulations Kerry James Marshall for continuing to make history. And congratulations @diddy for an amazing acquisition, we are excited about your plans for the future of the painting.”

“I knew about it and we’ve talked about it, and I think that it has more meaning than just wanting to have a painting by Kerry James Marshall,” says Maria Brito, who knew about it because she has worked as the art adviser to the rapper and entrepreneur Sean Combs – alias Diddy or P. Diddy – for about seven years.“ It was very important for him as a black entrepreneur and man of wealth to have something that is so meaningful, and it’s also historical.”

The idea of becoming an art adviser germed after seeing others in action. “They don’t know what they’re talking about, they don’t have passion,” she remembers thinking.

Brito’s path to becoming an art adviser to the rich and famous wasn’t so straightforward. The Venezuelan-born New Yorker spent her formative years in Caracas, during a time of political turmoil that saw her leave the country just before Hugo Chávez came to power in 1999. “It was bad even before Chávez because of the lack of social justice and opportunities. You oppress people by keeping them stupid so they carry on voting for you, you know what I mean? I really wanted to leave.” So she applied to the top U.S. law schools – NYU, Columbia, Chicago and Harvard – and was accepted at all of them. “Of course I was going to Harvard because nobody says no to that,” exclaims Brito, who admits she suffered from imposter syndrome during her first six months at the prestigious school. But she went on to graduate from Harvard and passed the New York State Bar Exam on her first try, afterwards working at an internet start-up before spending eight years as an attorney at a corporate law firm. 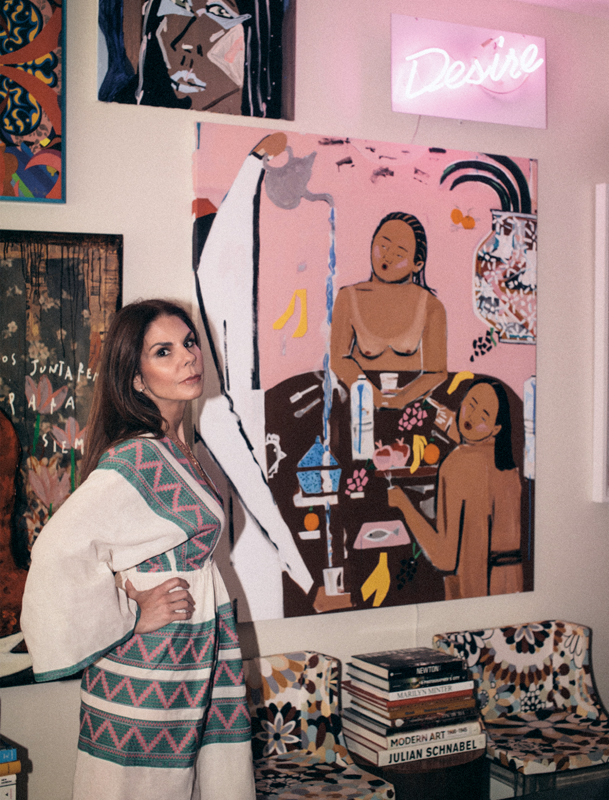 Brought up in a middle-class family who collected Venezuelan artists and who could afford to travel, Brito always had an interest in art, and even attended the first Art Basel in Miami Beach in 2002. She entered the art world as a collector once her income enabled her to. “My first purchase was a print from the Keith Haring shop in SoHo,” she recalls. “That was not very sophisticated at the time, but it turns out to be a little more valuable than I thought it would be.” Brito also collected Latin American artists like Vik Muniz, and became better acquainted with galleries. The idea of becoming an art adviser germed after seeing others in action. “They don’t know what they’re talking about, they don’t have passion,” she remembers thinking. “They do it in such a corporate way, they should get my job and I should get theirs.” Brito put together a business plan and made an informed decision to leave her high-paying corporate law job and start art advising in 2009. “I needed to do something for myself for the first time in my life, because I felt like I was always pleasing my parents or trying to conform to certain standards, being the good Catholic girl. But it was a very crazy move,” she admits. She cast a net out to friends and family, and it was her husband who referred her to her first official clients, a couple looking for work by Brazilian artists. She helped them acquire pieces by Beatriz Milhazes, Vik Muniz, OSGEMEOS and Sergio Camargo. Although she had no traditional art-history or museum or gallery training, Brito quickly learned the ways of the art world, forming substantial connections in the process.

Brito’s intelligence, ambition and authenticity helped build her business, earning her wealthy clients from the worlds of finance and law, and celebrity clients like Gwyneth Paltrow and Combs, who found her through a mutual friend. She accompanied Combs to his first Art Basel in Miami Beach in 2011, and helped him acquire his first piece – a large-scale Keith Haring on paper from the black-and-white series of flags and Mickey Mouse drawings. In a way it brought her back full circle from the very first Keith Haring piece she herself had purchased.