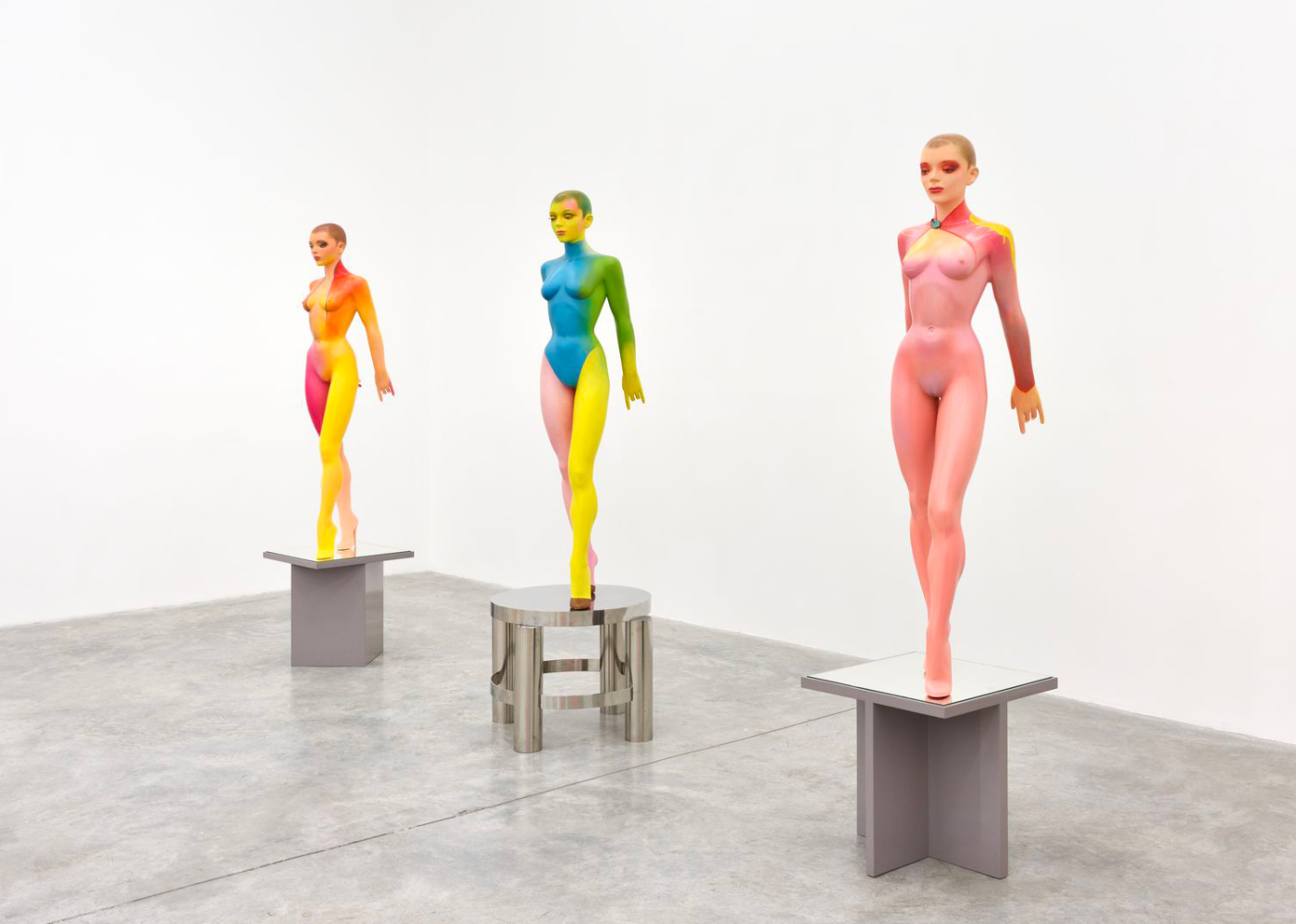 It has been ten years since Paris last saw the work of this major British artist, a painter and sculptor who, in the early 1970s, caused a sensation with a table, a chair and a hatstand. At 82, Allen Jones, one of the first British Pop artists, still finds his name indelibly attached to a sculpture that influenced not only Stanley Kubrick but generations of fashion photographers, including Steven Klein who, in 2015, immortalized Kylie Jenner for the American magazine Interview in a shoot that was blatantly influenced by an artwork that is now 51 years old. Which is to say five years older than Kate Moss, who at a certain moment was Jones’s muse and model.

After his birth in Southampton, in 1937, Allen Jones’s family moved to Ealing, in west London, in 1940, and it’s there that he spent his childhood. He knew very early on that he wanted to become an artist, and spent four years at the Hornsey College of Art before enrolling, in 1959, at the Royal College of Art (RCA) – at just the same time as the generation that would invent English Pop Art, among them David Hockney and Ron Kitaj. In a period when Abstract Expressionism ruled the roost, the class of 59 had every intention of finding new ways of depicting the human figure – ways that corresponded to the promises of a new world, at a time when postwar austerity was finally coming to an end and sexual liberation was just beginning to take off. Indeed Jones was expelled from the RCA after only a year, to set “an example” – a way of making it clear to his generation that they’d better calm down.

Nevertheless, the following year he was invited to take part in Young Contemporaries, an annual student exhibition put on by the Royal Society of British Artists, which on this occasion only showed work from the RCA: it would go down in the annals as the first exhibition of English Pop Art. And Pop is indeed the perfect label for Jones’s paintings of the time, which depicted London buses in bright colours and featured cut-out forms that attempted to combine the flatness of the canvas with the depth of the scene represented. In addition to buses, he was already painting rather more erotic subjects, with a preference for female legs perched on very high heels, such as the 1966 First Step, which simply shows a pair of legs whose feet are jammed into ridiculously tall stilettos, making Mel Ramos pin-ups look like the most sanctimonious of prudes. Indeed trips to the States over the course of the 60s – Jones stayed at the Chelsea Hotel – had familiarized him with American post-war erotica in general and fetish magazines in particular. “Fetishism and the transgressive world produced images that I liked because they were dangerous,” he says. “They were about personal obsessions. They stood outside the accepted canons of artistic expression and they suggested new ways of depicting the figure that weren’t dressed up for public consumption.” At the end of the decade he had an intuition: “I’m trying to make these figures so real that maybe what I should try to do is make it real,” leading him to try his hand at sculpture. The result was Hatstand, Table and Chair, made in 1969 and first shown in 1970, an ensemble of three slightly-larger-than-life female figures dressed in SM gear, whose poses suggest a hatstand, a table and a chair. First modelled in clay by the sculptor Dick Beech, they were then translated into glass-fibre and painted and dressed by Jones in corsets, leather boots and wigs. Shown for the first time at Cologne’s Zwirner gallery, they were immediately bought by the collector Peter Ludwig, and can now be found at the Ludwig Forum in Aachen. 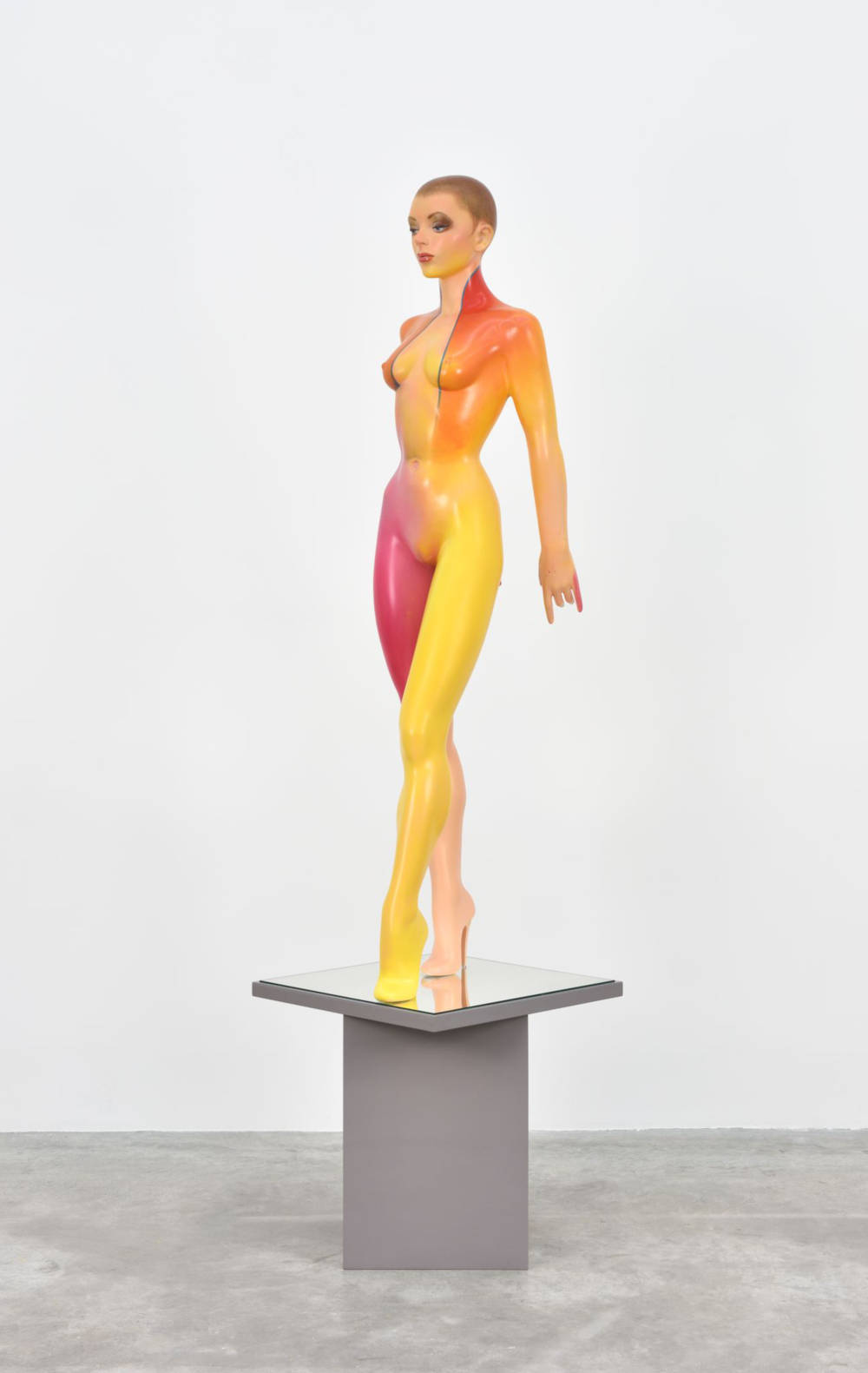 “The Korova Milkbar sold milk-plus, milk plus vellocet or synthe- mesc or drencrom, which is what we were drinking,” says the voiceover at the beginning of Stanley Kubrick’s 1971 movie A Clockwork Orange. “This would sharpen you up and make you ready for a bit of the old ultra-violence.” The furniture at the Korova Milkbar appears to be a di- rect knockoff of Jones’s sculpture, and indeed, when the film went into production, the artist received a call from Kubrick asking him to adapt his work for the sets. He turned down the offer, however, when he understood that he wouldn’t be paid, and suggested to Kubrick that he get a set designer to make copies – which the director did with alacrity.

Over the years that followed, Hatstand, Table and Chair would be the subject of countless, sometimes physical, attacks in reaction to an undeniable fact about the nature of its content: it shows women objecti- fied as pieces of furniture. Stink bombs were let off at Jones’s 1978 ICA exhibition in London, acid was thrown at the work when it was shown at the Tate in 1986, and there were violent feminist protests right from its first outing. “I can see they are perfect images for an argument about the objectification of women, and if someone thinks that, it is very difficult to gainsay it,” Jones told The Guardian in 2014. “But it is a coincidental and unfortunate reading that has nothing to do with the work. As an artist, I have a responsibility to art. As a human being, I have a re- sponsibility to society. I was brought up a socialist and I think of myself as a feminist and I don’t need to defend my political stance.”

If the shadow of this work inevitably hangs over Jones’s oeuvre today, the exhibition of his work at Paris’s Almine Rech Gallery (which was briefly on view just before the COVID-19 lockdown) brings out all the talent of the former Pop star. To start with there are his canvases, composed of layers of paint and var- nish that evoke Chagall and Matisse and give free rein to a peerless col- ourist, who depicts, in these imagi- nary spaces, “generic” female bod- ies. For they are never portraits, even if Jones admits that there have been a few recurrent muses, among them supermodel Kate Moss. As he told Forbes Magazine in 2015, “I have made very few portraits because of the risk of compromising my own art or offending the sitter’s expecta- tions. I was commissioned to work with Kate Moss, the challenge of painting a person so universally rec- ognised through photography was irresistible. She came and sat for me several times over a few weeks, I gradually began to see possibilities not only in paint but also in sculpture and, indeed, photography. I drew her, I photographed her, I had her modelled from life and for a work I had her cast in resin and steel.” 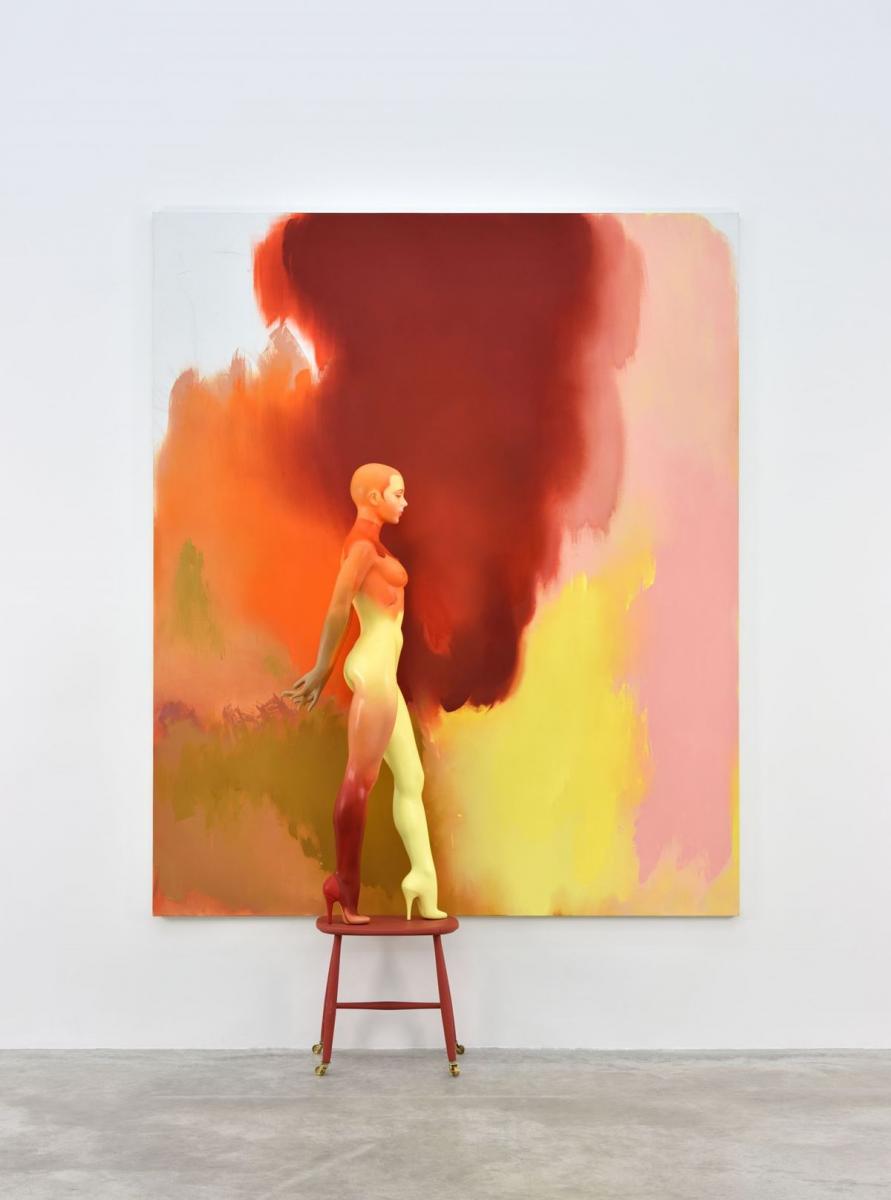 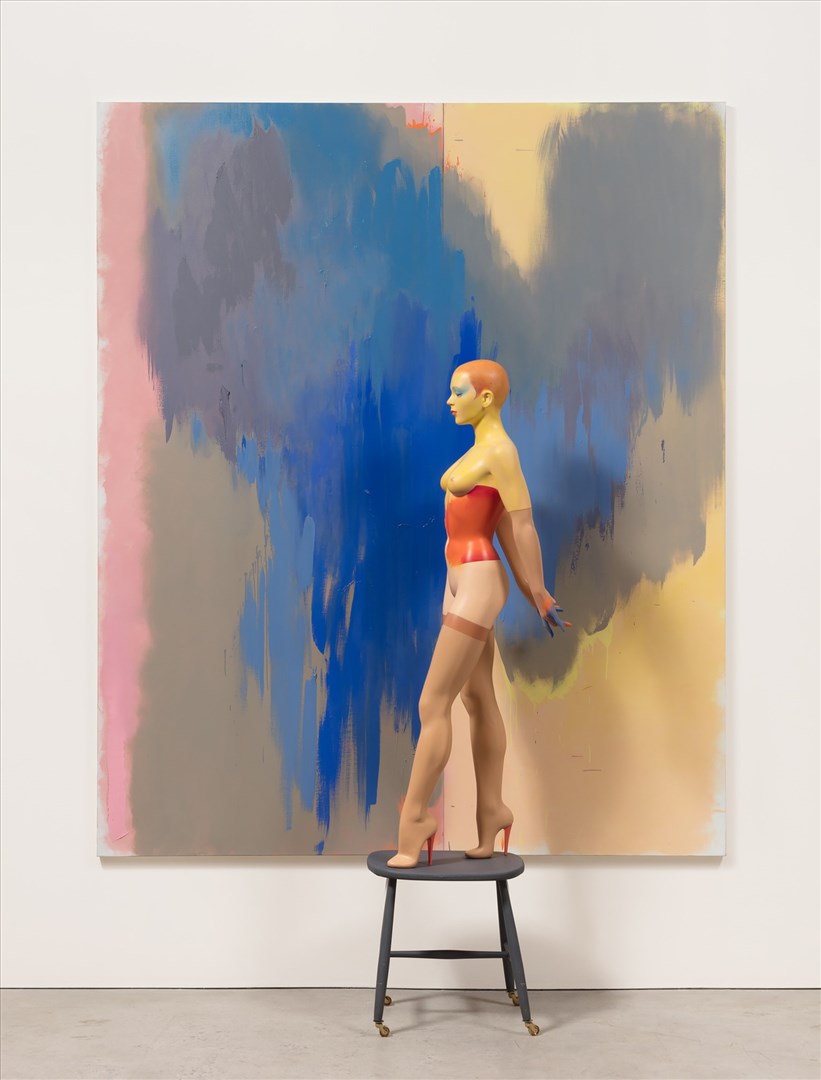 His sculptures in painted fibre-glass are just as arresting. They depict, of course, women’s bodies, but they show far more “empowerment” than the subjugation for which he was berated when he started out. These female figures, perched on little tables or pedestals, seem to have been frozen in the pose of Degas’s La Petite danseuse. Their bodies become canvases that Jones paints with colour in assemblages and forms that evoke American Abstract Expressionism.

In the show, two incredible sculptures show women imprisoned in structures of metal and Plexiglas that resemble shop display cases (the word “boutique” is even written on one of them) – evidently Jones is playing on his notoriety, unless of course he’s (also) playing on what we, his contemporary viewers, project onto his work. All his mastery comes into play in his combinations of paintings and sculptures: when Jones places his truer-than-life fe- male figures in front of abstract canvases that serve as a decorative backdrop, painting is deployed in both two and three dimensions in a total visual world of acid hues.

It has been a decade since his last Paris show, and the current one, which debuted at the beginning of this sombre month of March 2020, was open for barely a week – just enough to make sure it becomes legendary. How one would have liked to go back again and again, and come to the conclusion, following the example of curator and art historian Sir Norman Rosenthal, that “Allen Jones draws his huge knowing aesthetic strength from the classical past while engaging in a critical and celebratory exercise of contemporary obsessions with human relations between the sexes.”