Elmgreen & Dragset storm Place Vendôme: "Will humanity disappear to give way to nature?"

Star fish have invaded the place vendôme! Who is responsible? Why elmgreen & dragset of course! Numéro art met up with the explosive duo, who are guests of honour at paris’s art fair fiac this autumn. 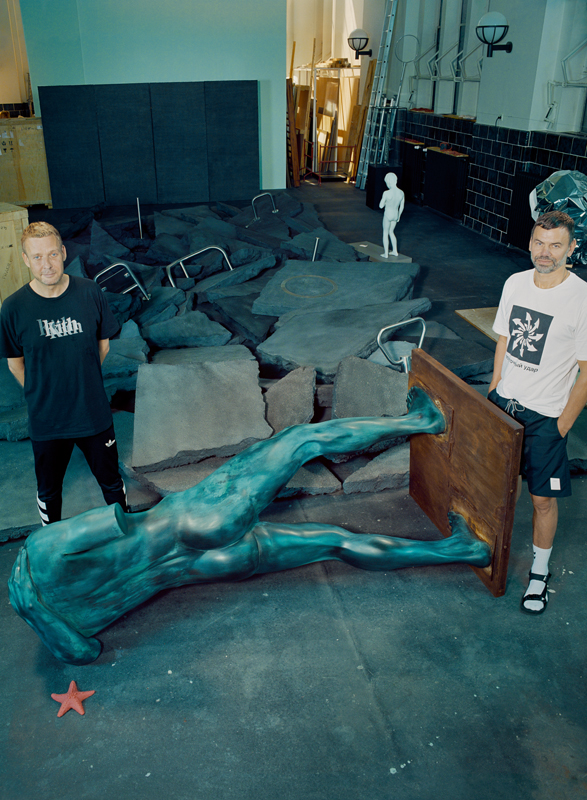 Michael Elmgreen and Ingar Dragset in their Berlin studio. Foreground : “Some Stayed on While Others Left” (2018), reverse sculpture currently on display at the Whitechapel Gallery à Londres. Left: one of the 100 sea stars of "To Whom It May Concern" (2018), bronze, steel and patina, installed place Vendôme during the FIAC. Background: “Broken Square” (2018). Stone, epoxy resin, polystyrene, presented at the Perrotin gallery in Paris.

Numéro art: Let’s start with your intervention in Paris during the FIAC. More than 100 star sh—life-size sculptures—took over the Place Vendôme. Has nature reclaimed its rights?

Michael Elmgreen: We wanted to create an image worthy of a science ction lm: the Seine ooded the square and left star sh in its wake. These creatures are a bit like aliens or gentle intruders. In ancient times, star sh were thought of as the underwater re ection of the stars in the skies. They also have an enormous survival instinct. You can cut off all of its arms and a star sh will grow them back.

Afterwards, the work was installed in the Domaine de l’Etang near Angoulême...
Ingar Dragset: Whether in the middle of the city or in the middle of nature at the Domaine, this work re ects larger environmental issues. Were the star sh brought here by an ecological catastrophe or a tidal wave? Did humanity disappear to let nature take over? The original choice of Paris was not neutral. We’ve witnessed the Seine ooding rsthand over the last few years. The city also welcomed the COP 21—which Trump refused to sign.

Power, and the way it’s symbolically incarnated in structures – especially architecture, hierarchies, and thought patterns –, has always been at the heart of your work. You’ve just opened a huge show at London’s Whitechapel Gallery that includes several of your iconic pieces.

M.E.: Whitechapel’s upper oor welcomes a kind of retrospective of our work. Our sculptures of the little boy fascinated by a weapon hanging on the wall and the other little boy crouched in a chimney are there. Most of our work questions toxic masculinity. As children, our education encourages certain behaviors. We expect little boys to play with toy guns and be fascinated by rearms. It isn’t said often enough that men are responsible for 99,9% of gun violence. It’s a masculine problem. And when the little boy doesn’t follow the expectations of his parents—of society—he suffers, feels guilty, and refuges himself in the chimney.

“The church asks us to suffer and feel guilty in the presence of the crucified Jesus, but here the act is voluntary.” 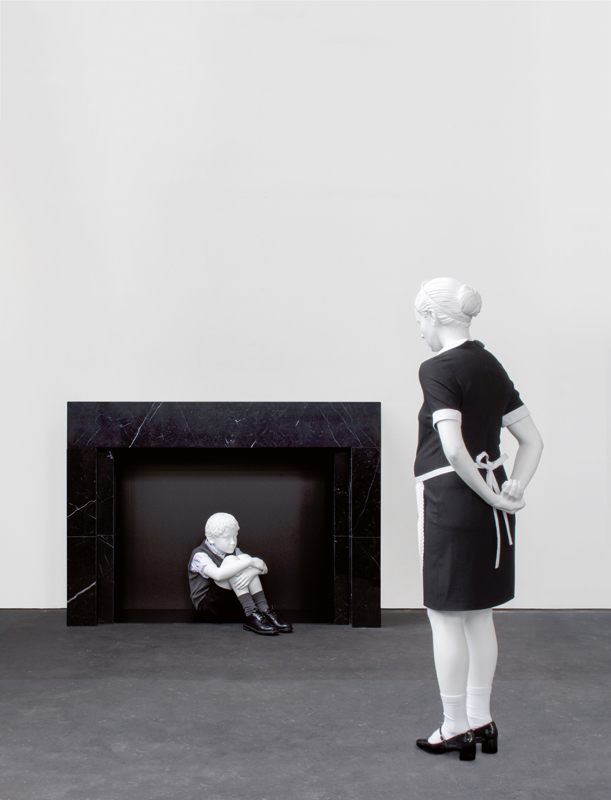 You’re also presenting a Christ on the cross, but the cruci ed man’s backside faces the public. It is close to a sado-maso scene.
M.E.: The church is another power structure. It asks us to suffer and feel guilty in the presence of the cruci ed Jesus, but here the act is voluntary. It’s made in the search for pleasure.

You’re also presenting a new installation that takes over the rst oor of Whitechapel. What is it?
I.D.: We transformed the ground oor into an abandoned public pool—like there are so many of in London. A plaque explains that a real-estate consortium planning to convert it into a private spa bought the property. The swimming pool is the symbol of the fate of so many public spaces: a privatization that participates in gentri cation. It’s a real epidemic in London. Low-income housing is being pushed out, while glass towers and luxury residential complexes— for people who almost never live there—are multiplying. When you walk through certain London neighborhoods at night there’s not one light on. The houses and apartments aren’t lived in. They’re nancial investments. The previous mayor Boris Johnson is responsible for this. He not only had a disastrous impact on the government and Brexit, but on the city. When we inaugurated our sculpture in Trafalgar Square, our greatest victory was to have Joanna Lumley from Absolutely Fabulous present the piece instead of him.

The Perrotin gallery also welcomes an important exhibition of your work this fall, including the installation you were photographed with for this magazine. What does this oor of exploded asphalt represent?

M.E.: We tried to create a mental image of the epoch we’re living in—an epoch where we don’t know where we’re going anymore. You know, this feeling of things dramatically changing in the bad way. The oor disappears beneath your feet and you don’t know what to do. All that we believed in, all that we took for granted—our way of voting, writing news, even our conception of truth— is being questioned. Today, how can we know whether any information is factual? We’re no longer able to live together or make communities. And Brexit is only one of many symptoms. We’re living in an atomized society. Individualism dominates; it’s the reign of survival. We no longer have communal experiences. 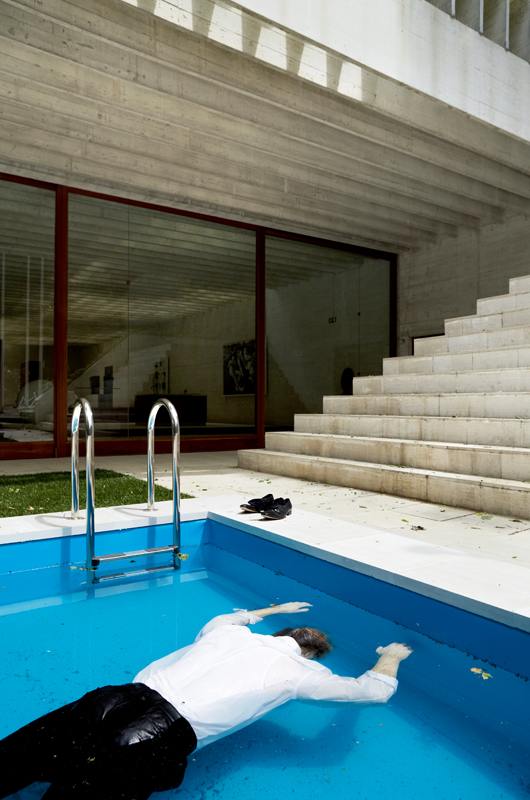 Is your interest in communal life linked to your Scandinavian origins? How can we make a community today?

I.D.: Post-war Europe built itself up from the idea of bettering the lives of the working classes and creating public infrastructures that would ensure peaceful coexistence. Keynes defended the welfare state...he was British.

M.E.: To respond to your second question, the problem today is that people no longer recognize themselves in their old identities. To be working class, gay, or Danish doesn’t mean the same thing today that it did 30 years ago. Identities are multiple. You take a bit from the right and the left... you’re more active in the construction of your identity today. Social media has greatly facilitated this phenomenon. But it has also decreased the urgency of coming together. In our community, an application like Grindr empties the bars. Why go out when you can talk to hundreds of boys from your couch? Meanwhile, the working class has transformed into a formless middle class and lost the force of its identity. An identity and pride that was at the origin of the punk movement. Our work has always been about the way identity is formed in a world where all the categories and de nitions are being reshuf ed.

Since the beginning, you’ve used the strategy of surprise. Your installations upset a certain reality, or normality, in a way that disarms the viewer. Beyond grabbing our attention, your work invites us to change the way we see and think.

I.D.: The effect of surprise is essential. Even truck drivers stopped short when we installed the Prada boutique reproduction along the desert highway in Marfa. But we want to show through our interventions that it’s possible to change things. It’s possible to stick hundreds of star sh on the oor of one of most beautiful historic squares in Paris, despite the constraints of patrimonial preservation. It’s possible to convince a classic London institution to reinvent its architecture from the ground up. It’s possible to act and think outside conventions. Social structures, power structures, and physical structures are malleable and modi able. People are often petri ed by fear. Art won’t revolutionize the world but it can help us to have less fear—less fear of change and the new, by showing how changing a classic institution or established order can have happy consequences. And the less people are afraid, the less they’ll be manipulated. It’s one of the objectives of our artistic practice.

This Is How We Bite Our Tongue, until January 13, 2019, Whitechapel Gallery, London.
Elmgreen & Dragset, from October 13 to December 22, Galerie Perrotin, Paris. 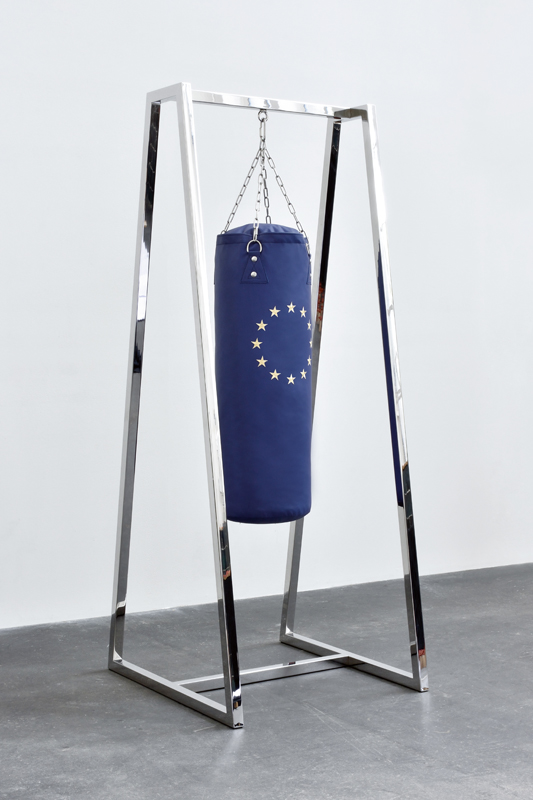 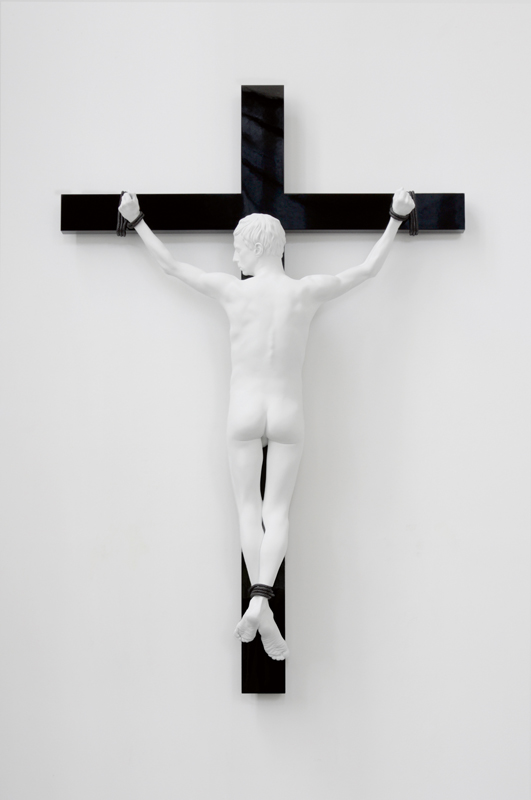 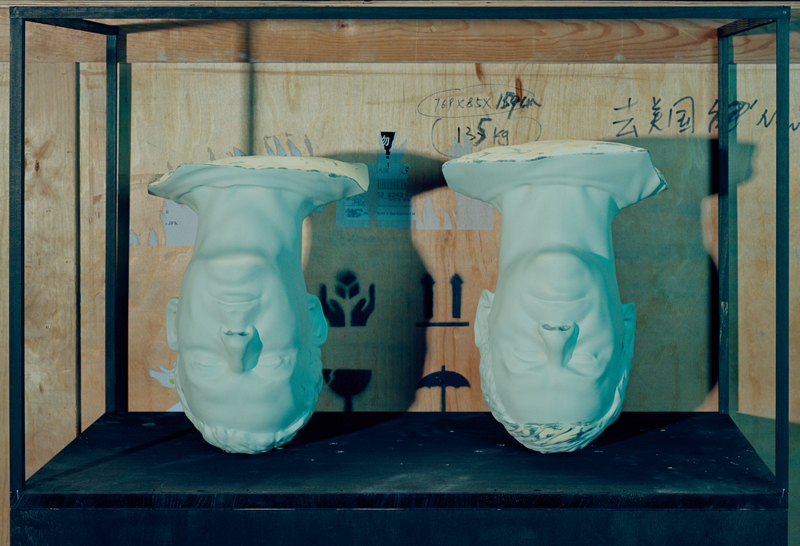 In the studio, two busts, first self-portraits of the artists, made in 2018.