At the age of 37, Jean Imbert is the French chef at hip-hop icon Pharrell Williams’ restaurant in Miami. A veritable consecration for the man who already owns five establishments in Paris and has just opened a new restaurant in New York. Portrait of a hyperactive enthusiast busy exporting the flavours of his youth across the Pond. 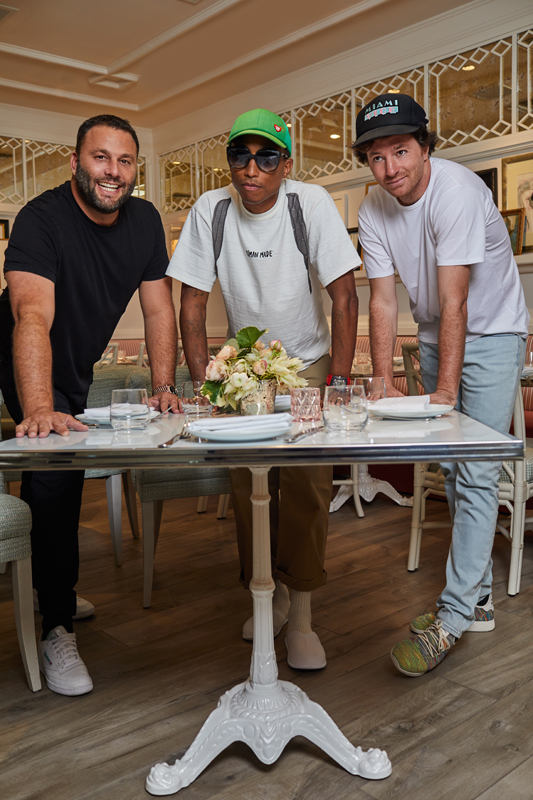 David Grutman, Pharrell Williams and Jean Imbert at the Swan restaurant in Miami.

“The Notorious B.I.G.” printed on his sweatshirt, sneakers on his feet and a baseball cap, Jean Imbert cultivates a natural and authentic vibe, and is well at ease in B.B., rue Blanche (Paris, 9th), one of his Parisian restaurants, within this refined setting where seasonal dishes are served with the greatest of care. While he regularly rubs shoulders with the international elite and is responsible for countless dinners for big luxury houses like Hermes and Dior and even Instagram’s founder Kevin Systrom, for whom he’s already cooked in San Francisco, he is now busy conquering America with two new restaurants: Swan in Miami and Encore in New York. Two openings in quick succession in October and November, and which are likely to be a veritable challenge for the chef. “It’s an enormous challenge, its been a long time since a French chef made it there starting from zero. It’s a game of poker. But I am so proud that big Michelin-starred chefs like Éric Ripert, Jean-Georges Vongerichten and Daniel Boulud have been supporting me in my mission,” he enthuses.

“The project for Swan came from one sentence from Pharrell offering to open a restaurant with me. And obviously it was so crazy I said yes.”

Knowing how to provoke destiny

At 22, with an approach that’s pure ‘yolo’ – you only live once – Jean Imbert opened his first Parisian restaurant L’Acajou (Paris, 16th). A contemporary and intimate venue, it soon drew in a slew of celebs like the French musician Woodkid and the American actor Robert de Niro. This first step was a natural progression from a long story for the man who from the age of 10 was following recipes from his mother’s cook books. “As a kid, I created a little restaurant at our house, and on Wednesdays I’d go to the kitchen and prepare meals for my parents, with my brother as waiter,” he tells us. A true vacation for this fast-moving teen, keen to learn and cross with the idea of having to complete a baccalaureate to get into the Bocuse school where he would spend two years. During this training period he learnt the basic cooking techniques: how to peel a carrot or an apple, among other things. Gestures which fascinated and stimulated his thirst for knowledge. Never satisfied, he reproduces them even at the weekends when he goes home to his parents home in the Parisian suburbs. “My grandmother enjoyed gathering people she liked around a table. That’s undoubtedly the reason why I decided to do this job,” confides the chef. “With cooking, we bring together childhood friends, the family, acquaintances and any barriers just fall away. I’ve learnt the value of these precious moments.” 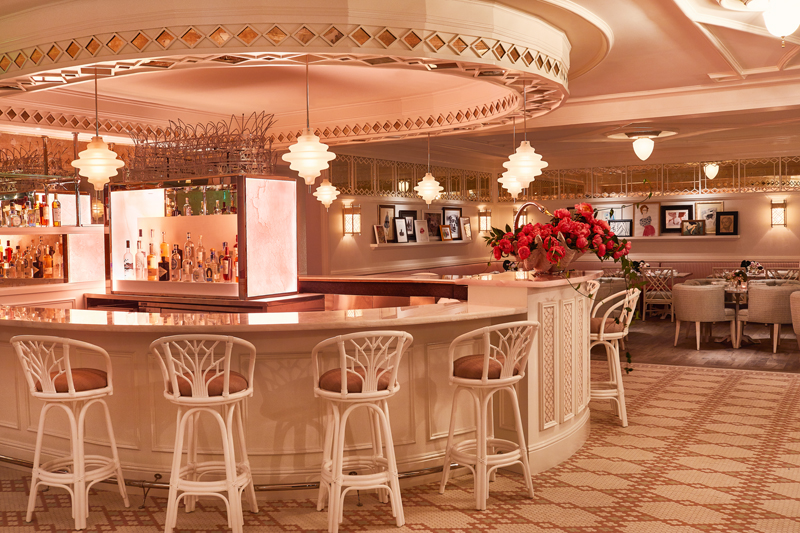 The “Swan” restaurant in Miami.

“I’ve succeeded in putting my grandmother’s blanquette de veau on the menu in a restaurant in Miami with 1000 covers on a Saturday night. And when I see Drake posting a photo of the lobster dish I learned to cook with my mother when I was little on Instagram, it’s awesome!”

From Paris to New York, via Miami

After the opening of L’Acajou, the B.B. and Les Bols de Jean (which already has three establishments in Paris), Jean Imbert is now heading up five restaurants in the French capital. With this dazzling success in his pocket, the winner of the third season of Top Chef in 2012, decided it was time to hit America. And so with his friend singer and producer Pharrell Williams he’s just opened his first Stateside restaurant, Swan in Miami: “The project for Swan came from one sentence from Pharrell who offered to open a restaurant with me. And obviously it’s so crazy I said yes!” It was during a dinner at Colette in Paris, six years earlier, that the musician fell for the Caesar salad prepared by Jean Imbert (it’s now on the menu at Swan… so it’s come full circle). It was then at a crepe party in New York at his artist friend J.R.’s house, to which Pharrell was also invited, that the two men sealed the deal. “He came several times to mine in Paris to see the vegetable garden I have on the roof. We often talked about ecology and good products, and then we had the idea for the restaurant.” Under the impetus of David Grutman, the famous Miami hotel entrepreneur, the project became concrete with the name of Swan, a restaurant whose products all come from local organic farms. “Basically, I have succeeded in putting my grandmothers blanquette de veau on the menu in a restaurant in Miami with 1000 covers on a Saturday night. And when I see Drake posting a photo of the lobster dish I learned to cook with my mother when I was little on Instagram, it’s amazing for me because there’s a part of my life in each dish,” he explains.

While Jean Imbert is evolving daily with his “G10” – the nickname he gives his close team of ten people – his brigade grew once again last November with the opening of his restaurant Encore in New York. A name with another hip-hop reference, that of a concert by rapper Jay-Z in Brooklyn in 2017, during his 4.44 American tour, and during which Jean Imbert cooked for the artist. At the end of this particular show, Jay-Z played his legendary track Encore three times… and a lightbulb came on in Jean Imbert’s mind… The very next day he sent an email to his teams suggesting the name for the restaurant he was planning on opening in New York. Another story born from yet another random encounter: that of the owner of a space in the Meatpacking District, while Jean Imbert was taking part in a cooking session at the Chefs Club restaurant in New York. At Encore, Jean Imbert remains loyal to his convictions and plays the seasonal local produce card once more: “The fruit, vegetables, meat and fish are cultivated less than 30 kilometres from New York. We have honey from the rooftop of the building. I’m very proud of this. Everything is organic and there’s no GMOs, we know where everything comes from. Even the mozzarella comes from Brooklyn!” 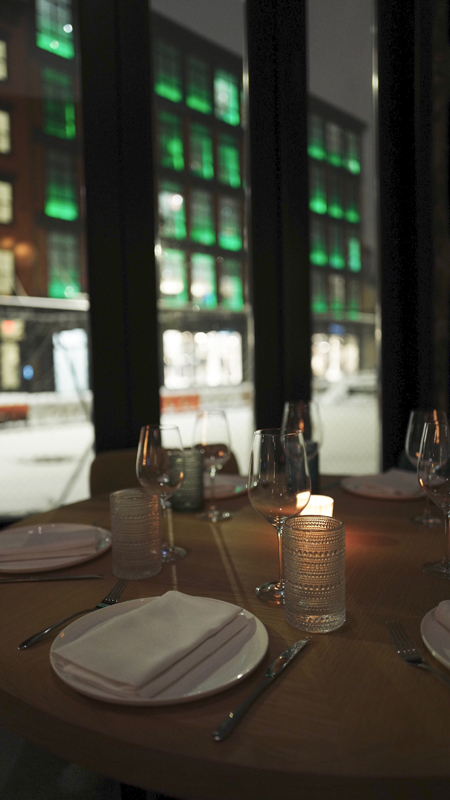 The "Encore" restaurant in New York. 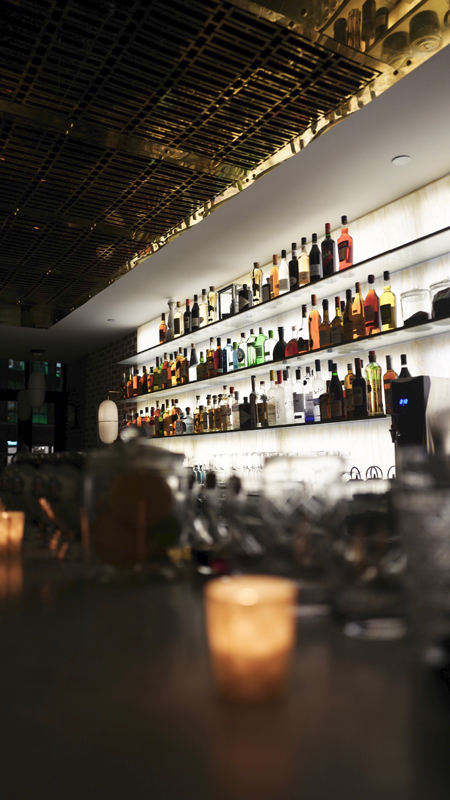 Freewheeling without a safety net

With an Instagram account bursting with very beautiful foodie shots which would make any fan on the social network turn to green cooking, Jean Imbert mixes up the genres. Sometimes in his grandmother’s kitchen, sometimes at his restaurant, surrounded by international superstars like Beyoncé, Dua Lipa, Kristen Stewart and Virgil Abloh, the cook also occasionally shares important images from his own life. “I often thank my parents in Instagram posts. For the last two years when I go and see my grandmother on Sundays, I like to make little films and post them on the social networks.” While he doesn’t see himself as very connected, he certainly appreciates the community around him. “I’m a freewheeler, there’s no calculating. Even in the way I do Instagram, there’s no filters, its real. I’ve got pretty crazy numbers on this network. I think it’s a real community that resembles me, they’re fans of good food and products.” Making his healthy products his workhorse, he also touts the idea of immersive cooking: “Cooking is 25% visual, 25% flavour and 50% story-telling: the story around the dishes can be conditioned and creates an atmosphere like with a film. And it doesn’t hinder the substance.” In 2019, his biggest challenge will be New York, but also Paris where he plans to open a sixth restaurant. And when asked about his desire for stars, he doesn’t derogate from his franchise rules: “it’s a future project I’ve yet to embark on…”