Under its silver dome, the Louvre’s new satellite sparkles like a precious jewel in the Abu Dhabi sun. This sumptuous showcase, which will display nearly 600 artworks when it opens in November, is the work of Pritzker Prize-winning architect Jean Nouvel, who took Numéro on a behind-the-scenes visit. 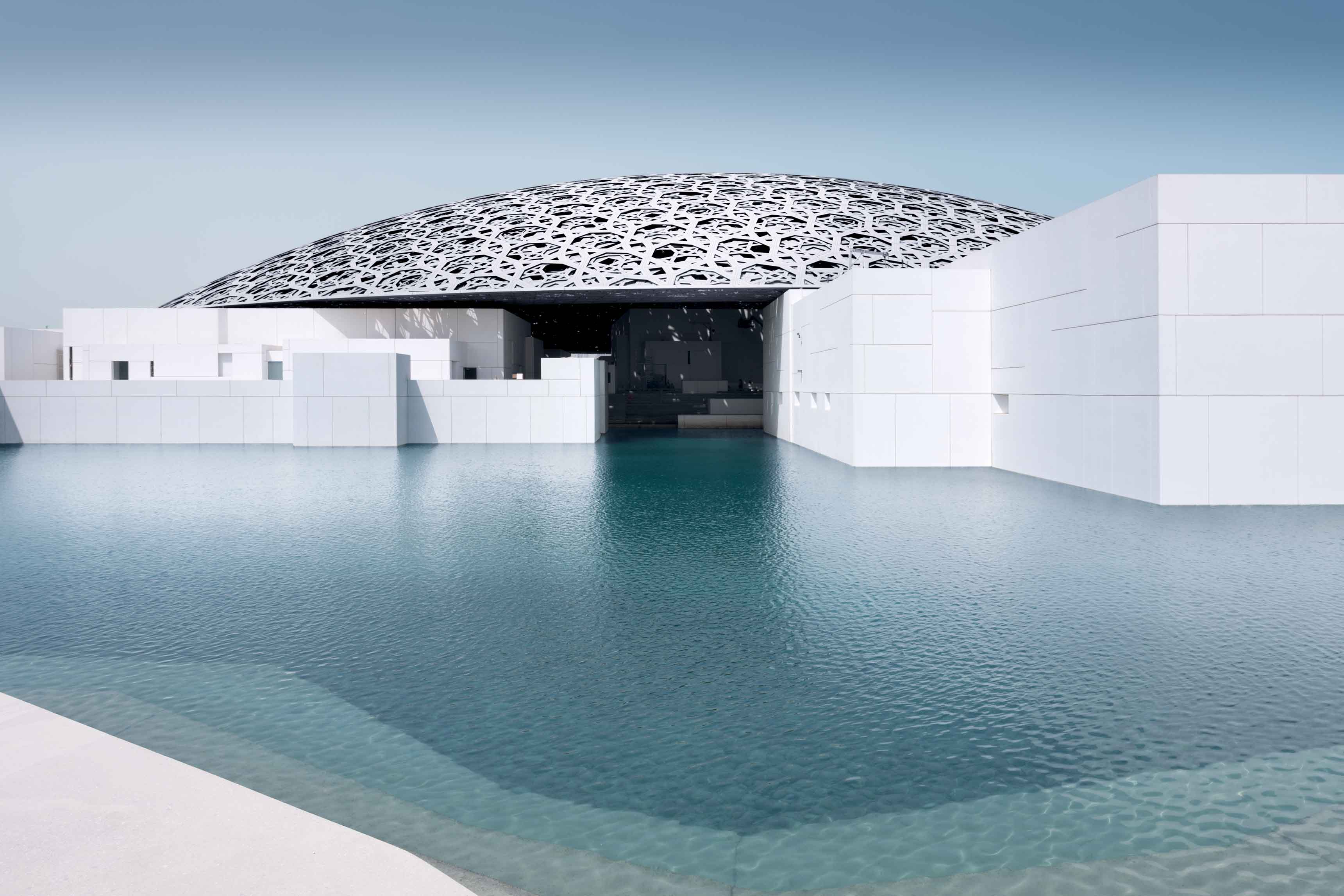 It has landed at the tip of a formerly deserted island, a giant beetle with a perforated silvery wing case, permanently whitened by the sand-saturated wind. This giant beast is none other than the new Louvre-Abu Dhabi, designed by French architect Jean Nouvel and the first piece of a museum puzzle that has been christened the Cultural District. Planned by the emirate’s rulers, this new neighbourhood is being built on the 2,700-hectare island of Saadiyat (a quarter of the size of Paris) which, besides the Louvre, is set to include four major cultural buildings by four Pritzker Prize winners: the Zayed National Museum, which will tell the story of the United Arab Emirates, by British architect Norman Foster; the Maritime Museum, designed by Japanese architect Tadao Ando; the Guggenheim-Abu Dhabi by the Canadian-American Frank Gehry; and last but not least, the Performing Arts Centre, dreamt up by the late Anglo-Iraqi Zaha Hadid.

It fell to Jean Nouvel to kick off this meeting of “starchitects”: “My Frenchness was very happy!” he joked during an on-site visit on 13 September. Even if, for the time being, the new Louvre-Abu Dhabi seems rather adrift in a context that’s yet to happen, it’s assuredly one of Nouvel’s most astonishing and most accomplished buildings ever. The challenge he set himself? An acute reinterpretation of local traditional architecture. “I know Arab architecture very well. One of the first buildings that brought me fame was the Institut du monde arabe in Paris [inaugurated exactly 30 years ago]. Arab architecture is based on two ideas that I particularly appreciate: light and geometry,” explains Nouvel. But his tour de force is having managed to spectacularly marry two archetypes of the Arab architectural vocabulary, the dome and the medina. “I’m a contextual architect,” he continues. “In that sense, my first wish was that this museum should fit in with the culture, history and geography of Abu Dhabi, that you wouldn’t be able to transplant it to Paris or New York, but that it would be designed precisely for this spot, and that it would be an Arab architecture of today.”

Arriving in Abu Dhabi via the Sheikh Khalifa Bridge, to the northeast of the city centre, the first thing the visitor perceives is these two characteristic forms that have been ingeniously merged so that you can no longer guess their respective limits: on the one hand an immense dome that has been slightly compressed, and on the other a series of white cubes of different sizes. The building is colossal – 97,000 square metres. Once you’ve crossed the threshold, you’re taken on a route that is voluntarily labyrinthine. “I didn’t want to create a straight avenue,” explains Nouvel, “but rather a promenade that would be marked by a series of discoveries, in the manner of the traditional Arab city. If you see everything the minute you arrive, you soon get bored.” Which is what inspired this collection of individual buildings in white concrete – 55 in total, of which 23 contain gallery space –, which do indeed make this building resemble a chunk of urbanity. “This museum is a micro-city. There’s a game of scale with the white cubes, which are obviously much bigger than the houses of a medina. Each volume houses a different gallery or function,” adds Nouvel.

“Under the dome there’s an effect of kinetic movement thanks to the variation in the sunlight, which has been described as a ‘light shower.’ The effect is breath-taking. But I also wanted this ‘parasol’ to be read as a metaphysical relationship with the sky.”

The exhibition galleries – which cover 8,600 square metres in total – are sometimes top-lit, sometimes not. Between each one are passageways offering a multitude of framed views onto the exterior, sometimes through metal mashrabiyas. Shortly after entering, visitors discover for the first time, thanks to an opening in the ceiling, an intriguing view onto a fragment of the dome. But it’s only after proceeding into the first exhibition space that they find themselves underneath it. And they’re in for a shock! Rising 29 metres at its zenith, the dome is formed from eight layers of metal (a steel frame covered with aluminium latticework) superimposed on each other in a thickness of 7 metres, each one being skewed in relation to those below. Its diameter is 180 metres and its 7,500-tonne weight is carried on four pillars that are carefully hidden inside the other buildings so that the dome appears to float in levitation. Nouvel describes the effect as “the aesthetic of the miracle.” “You always need to keep a bit of mystery,” he affirms, and it’s this mystery that is assuredly the crux of the whole spectacle. 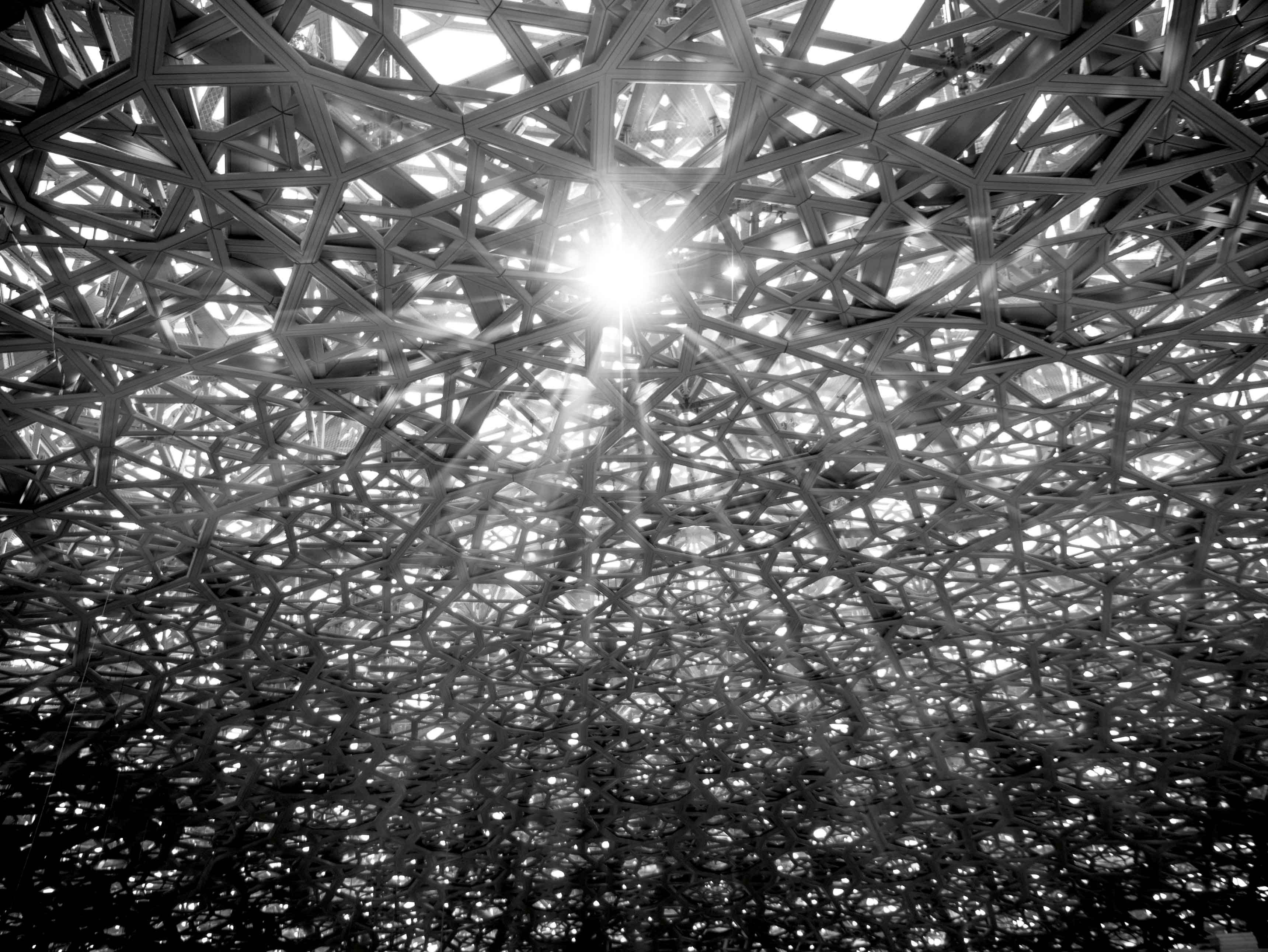 In a country where the sun is relentless and where it almost never rains, Nouvel has brought precipitation. Not a refreshing rain shower, however, but a shower of light diffused through the star motifs of the dome. “The light shower is first of all a memory,” he comments, “the memory of a tree, a palm tree for example, which, when you’re sitting under it and the sun shines through its leaves, creates a pattern of luminous dots on the ground.” But here there’s a subtle twist. “It’s a parasol for the city, and the rays of light that come through create a constellation of light on the ground and the walls.” The sun is like a giant projector that rotates around the colander of the dome. At one moment a ray of light will be blocked by one of the metal layers, but just a moment later, as the sun moves round, it will be able to pass. Stay just two or three minutes and you’ll see spots of light getting bigger or smaller, appearing or disappearing, perpetually changing with time and with the seasons. “Under the dome there is an effect of kinetic movement thanks to the variation in the sunlight, which has been described as a ‘light shower.’ The effect is breath-taking. But I also wanted this ‘parasol’ to be a sign of spirituality, to be read as a metaphysical relationship with the sky,” adds Nouvel. “The dome is also a symbol of a cosmography, of universality,” a celestial vault like that in which the desert Bedouins search for meaning among the stars.

“This very exact manipulation of light and shade is probably the most striking characteristic of the museum,” reckons Nouvel. But it’s not the only one, because this “contextual architect” has used all the means at his disposal. “We often talk about sustainability, and we rail against objects that have been dropped down from somewhere else and that you can find anywhere. But sometimes contemporary architecture is totally paradoxical. Here, on the contrary, we’re using all the features that the site has given us and which forge its identity, not so as to pastiche Arab architecture but to create something contemporary that is nonetheless anchored in the history of Abu Dhabi. We use the Persian Gulf and the sea breeze that refreshes it. We use light and nature, and cultural and historic components. I guess it’s what you’d call the genius loci.” Which also explains the interplay between the building and the sea; even the tide has its role, marking the white cubes with a line of green seaweed. “This project is a microclimate,” resumes Nouvel. “It uses the sea and seeks to create an optimal interface so that seawater can circulate between the buildings. It gives it a bit of a Venetian or Flemish air, like Bruges. Ultimately it’s a fragment of urbanity on the water, but a fragment of the city protected by a parasol. As such, it constitutes a series of spaces that can easily be used, even on very hot days, like a promenade that prolongs the city.” Under the dome the temperature is apparently three or four degrees lower than out in the open. “I didn’t want the museum to be a hermetically sealed building like a bank safe,” explains Nouvel, “but rather that it be open and agreeable to visit with an outside area in which people can move around comfortably despite the constraints of the climate.” And the ultimate in comfort is that the museum will even accessible by boat.